Everything you need, nothing you don’t.

Read and submit reviews for the Deck Pod.

Where to Buy the Deck Pod

Read reviews for the Deck Pod by Gearlab as submitted by your fellow paddlers. All of the reviews are created and written by paddlers like you, so be sure to submit your own review and be part of the community!

Submitted by: guest-paddler on 3/9/2020
Great and practical bag. Plenty of storage space and easy access. It would have been the perfect bag if it was waterproof.
Deck Pod
5

Just ordered mine, got it in…

Just ordered mine, got it in 3 days. Room for my 2 Liter water bladder. The mesh pocket for water tube is pure genius. Plenty of room for small gear and snacks. Everything is accessible from the front of my kayak. At only 4 inches in height its streamlined and doesn't get in the way. Buy yours soon, they will be a popular accessory item for the season. I use a NRS pump and float, they fit great and are easy to remove. Keep an eye on Gearlab. Great products for kayak enthusiasts.

Great deck bag. Holds water sack as described. Also has a clip for car keys and a pocket for extras. Only grip, it is not waterproof. You will need waterproof bags to keep items dry

I Just got the Gearlab deck…

I Just got the Gearlab deck pod I truly am impressed by the quality of the stitching. The design is innovative they have considered drainage requirements of paddlers with large strong webbing I was hopeful that the design would be a low enough profile to allow for a strong storm roll I feel it still will allow me to!

Haven't used it on the water…

Haven't used it on the water yet, but it secures well to the forward perimeter lines. Should put almost everything I need within easy reach. I like the connection straps and how easy they can be moved.

This is what I want in a deck…

This is what I want in a deck bag. I was initially worried that I would not have enough room for the things I normally carried. It was a needless concern. I had been carrying extra water bottles but the hydration pack feature and the fact that I have an option of using either a 3 liter a 2 liter bladder (I own both) eliminates bringing any water beyond the bladder. I have a dry box for wallet and keys and that fits in with the bladder. a rope, sunscreen, and sunglasses fit into the mesh compartment. I love this bag. The only thing I would like added would be a strap with 2 female connectors to hold the tie downs when the bag is off the deck and to keep the straps from flopping around when transporting my kayak. This would eliminate removing the straps after each excursion.

Nice design, simple to use…

Nice design, simple to use and quality workmanship

It's the most organized bag…

It's the most organized bag that I've used. The materials are really good quality, and the space in the bag, more than enough for tour gadgets, food and a water camel bag. Perfect.

So I've done a few short…

So I've done a few short expeditions and day excursions with the Deck Pod on my kayak and I really like it, it's super convenient. The new Pod is made with durable materials that will last for years. It was designed to secure the pump and paddle float and have an hydration pack at arms reach and to store some other accessories (snacks, spare compass ect. ) in the middle compartment ( approx. 3 litres.) It's not a dry deck bag, it has a mesh back section for water to evacuate. The Deck Pod is attached to the deck lines with easy loop through straps/buckle clip nice and tight and is easily accessible from the cockpit. I've done some rolls and paddled in windy and rough sea state conditions, and being narrow and low profile, it did not affect my paddling at all, i'm super happy with it. I give it a thumbs up Gearlab.

Finally I got a very useful…

Finally I got a very useful thing to be fixed over the deck of the kayak to transport various accessories. Such as a kayak pump and paddle float, or for a water bag up to 3 liters. All always at hand while you are paddling which makes it unnecessary to use the watertight deck hatches or the cockpit to store them. The materials are of good quality and the chosen design gives the deck pod an attractive elegance.

I think is just what we need to organise our kayaking essentials in an easy and fast way to get it while paddling, without stopping to open any storage compartment (forget twisting to get something from it).

I use to carry hydration bladder (no more bottles exposed outside or turning inside the kayak), pump (so easy to free it from de Deck pod), paddle float, river knife, lip stick sun protection, sun cream, nose clip, some food (like dry fruit snacks or energy sticks), even the camera or other gadgets.

I highly recommend it. Another advantage is that avoid water if necessary, so you don’t have to worry about.

I’m in love with the design that fits my kayak, Gearlab takes care of every detail and the finish is fantastic, the materials they use are high quality and that makes the item an essential for kayaking comfortably. I like the easy way you can fix it in and release it from the Kayak’s deck with buckles.

For me, I just see advantages on it.

It’s not the only Gearlab product I use, I’m so happy with all of them, but it seems that they improve in every new accessory they design. Recently it’s been awarded with best paddling transport/storage/launching from Paddling Magazine Industry Awards, which is another recognition to the accessory.

It appears that Gearlab’s Deck Pod is a deck bag designed with considerable thought to the needs of sea kayakers.

Gearlab sent me the Deck Pod at no charge which I have agreed to on the proviso that any opinions (positive or negative) are mine to express. The below is an initial impression, with longer term outcomes to follow in time.

I don’t see that many deck bags of any brand about on the decks of sea kayaks around this part of the world. Most people stuff a number of items under the front bungee cords for easy access, and keep other items in their PFD, below deck in the cockpit or in the day hatch (if the boat has one). My approach has to date been the same (no deck bag).

So I feel it is important to first reflect on why a sea kayak would bother using a deck bag: • Neaten up the existing items one may store in the front bungees, PFD and cockpit. • Provide additional storage volume for longer trips. • Provide quick and easy access to essential items. This is especially the case on rough seas, where getting to items in a day hatch and especially below deck can be difficult to dangerous. The location of a deck bag means it is the easiest and most stable location to access out on the ocean. This is not only a convenience factor, it can be a safety factor.

Whilst I haven’t used a deck bag for specifically for gear previously I often fish from my sea kayak and so I have had a procession of insulated deck bags for storing my catch. This has given me some insight into a few issues with the designs. Some of the common issues I have seen with deck bags (and my insulated fish deck bags): • Poor attachments to the deck lines – leaving the bag too loose and subject to move about. • Components that fail too quickly. The deck bag needs to survive constant UV and salt exposure. They need to be tough. • Bags that impede efficient paddling or rolling. • Bags that catch the wind. • Bags that are fiddly or difficult to access on the water, negating one of the points of moving the gear on to the deck in the first place.

Of course, the above counts for nothing unless the gear performs out on the water. An initial test has revealed nothing or concern or different to that noted above. The deck bags low profile means it doesn’t cause any issues either paddling or rolling. I added a couple of 500ml water bottles to the bag to see how they rattled about during rolling but didn’t even notice them. Pricing for the Deck Pod is pretty competitive with other deck bags on the market. Most, but not all of Gearlab’s products (for example I love the design of their dry bag, but it is too expensive compared to the alternatives) are competitively priced.

The Sea-to-Summit one is another reasonable deck bag, but the Gearlab bag is better designed for its purpose. For example the bungee cord webbing on the Sea-to-Summit is not going to hold items well enough in a combat roll situation. I’ve had a good look over the internet at other sea kayak deck bags as well – not the ideal research method – but I can pretty quickly see flaws in most of the other designs if they are to be used for serious sea kayaking.

I do like to get a lot more use on gear before I conclude an opinion and will post a second follow up review when that is complete. Some issues only become apparent over time. However at this stage, I do feel that Gearlab have produced a deck bag that is better designed than most for ocean sea kayaking.

As an instructor/guide, the…

As an instructor/guide, the Deck Pod allows me to easily keep my basic instructor kit in hand as I switch seamlessly between my different boats. I'm able to fit my paddle float, bilge pump, VHF radio, sunscreen, first aid kit, repair kit, spare whistle, and sponge in my Deck Pod. Durability is important to me, as it has proven to be for Gearlab as well. I haven't used it for a long period of time, but the design seems as though it will hold up to the rigor of daily paddling. I've used quite a few different designs of deck bags over the years, and the Deck Pod's layout suites me best. I can easily replace a paddle float with a water bottle and still be assured it stays in while paddling. I've put the Deck Pod through two days of surf kayaking without any worry of losing any piece of gear. Two things of note: the top mesh compartment doesn't fit my VHF (Standard Horizon HX870) so I choose to keep this on my person when I anticipate using it, thus assuring quick and ready access to it rather than zipped up in the Pod. I also look forward to seeing additional/extra tie-down clips for sale on the website; I'd like to put them on the perimeter lines of all my boats, allowing a more rapid switch between kayaks. All in all, the new Gearlab Deck Pod is a sturdy, well-designed deck bag, ideal for gear storage for recreational and professional use alike. I will definitely be picking up more Deck Pods for my instructors and look forward to putting more use on it! 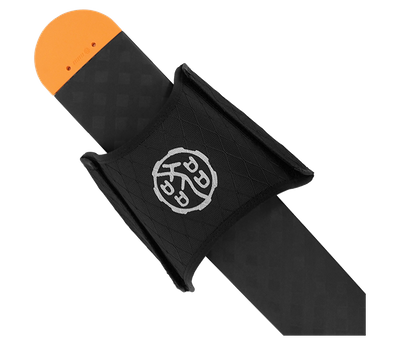 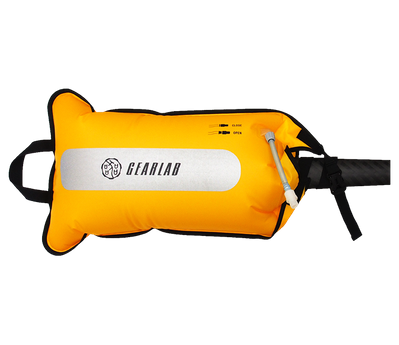