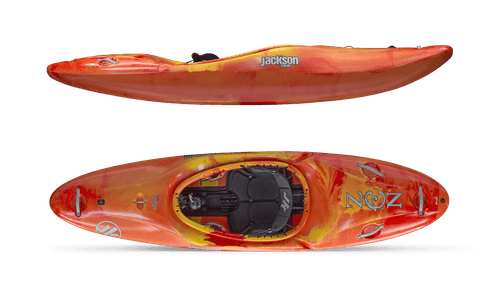 The 2015 Zen bridges the gap between river runner and creek boat and offers a new tier in speed and performance. The sidewalls are higher than the previous model giving it much improved stability. The added volume and bow rocker keep you higher on the surface. The Zen has held onto its fast, light maneuverability but now allows you to fly up and over rocks, holes and waves better than ever. Whether you are looking for a forgiving, easy to roll all around kayak while just getting started or wanting a sporty river runner that surfs as well as it creeks, the 2015 Zen is for you. This new 2015 hull design will make the Zen a forgiving kayak for those rolling, bracing and running whitewater for the first time. Making it not only an awesome instructional kayak but a top creek racer as well. The end result will be a Zen that is fast, stable and more versatile than ever on rivers and creeks. Available in three sizes, the Zen S, M, L.

Read and submit reviews for the Zen Small.

Read reviews for the Zen Small by Jackson Kayak as submitted by your fellow paddlers. All of the reviews are created and written by paddlers like you, so be sure to submit your own review and be part of the community!

Submitted by: Wavespinner on 5/3/2020
This feels like the latest episode in the saga of the search for an identity for the Zen. In this case, it's a step backward, which may not be a bad thing. That is, it seems they traded off some performance to make it more user-friendly. I read somewhere that the boat takes the body of the karma and appends the ends of the Nirvana. That's a simplification, but does strike a chord with me. It does have the higher parting line and slab sides of the Karma to fend off the lateral waves. That works well, but they wind up with a boat that can swallow you if you're not long-waisted. Some may want to slide a pad under the seat, trading off a bit of stability for leverage doing maneuvers, and rolls. The high volume and rocker take you over all but the hungriest holes. I'd put the materials and workmanship in the average range. It's Jackson outfitting, which you either love or hate. I like it well enough except the foot blocks in this edition feel a bit spongy. My pet peeve is the unrequested GoPro mount screwed into the front deck. I'm sure they get a little kickback for that hole and bracket, but it's almost useless unless you like footage of splashes. It's fast enough, maneuverable enough and stable enough to get almost anyone through anything up to class lll, which makes it a decent beginner boat. It's almost Mamba-like, but not as bulletproof. The price is above what I'd expect in a boat that isn't all about the performance. But, it's worth a try if you're looking for a basic river runner with a few creeking traits.
5

By far my favorite boat.…

By far my favorite boat. Easy to paddle, responsive and easy to roll. It's even easy to hand roll the boat.

The Zen is a river runner…

The Zen is a river runner that lets you play some but also eases your ability to go down-river. It's much easier to manage the flat water sections in this. I have many friends that also have Zens.

Submitted by: paddler236204 on 9/1/2015
This is about the 2015 Zen medium. I was torn between the Liquidlogic Remix 69 and the Jackson Zen medium. The Remix with its displacement hull and awesome comfy seat out fitting, or the Jackson's planing hull and very adjustable seating. Both high quality boats. In my case a Zen found me first.

Phenomenal stability, low CG and amazing carving and surfing. Confidence inspiring. It performs exactly as advertised and fits me like a custom shoe (5'9", 175lbs) Even has a GoPro camera mount on deck. 2015 version seems state of the art.
Downside? limited color choices..

Submitted by: Wavespinner on 3/26/2015
I chose to list this under a category distinct from the original Zen because it is more of a different type of boat instead of a simple update. The original was a pure river runner and this is a hybrid with creeker traits. Whether that's good or bad is according to your preference.

The sizing has changed. I had the largest original Zen (79 gallons, depending upon the date listed), for which my weight (190-200) was right in the optimum range specified, and that seemed to work well. In the new version, the medium is about that volume, but the optimum weight is pegged around 180. With a volume of over 10 gallons more (11-16, depending upon date of data release) the large is specified for my weight. It feels huge for a river runner.

The bow has more rocker, the parting line is raised and there’s more volume, bow and stern. This version spins quicker but doesn’t feel like it holds a line as well. A planing hull and good edges retain river running traits. I've seen accounts that they pumped up the volume because of feedback that the original version submarined but I found that only so in the biggest of whitewater.

It punches holes and resurfaces better than the original version and is less susceptible to unintentional squirts and other surprises. However, it is slower and attainments feel like more work. It surfs fine and rolls pretty good. Draws, sweeps, etc. are easy.

The grab handles are very good, as is the outfitting (if you like the Jackson design, which I do). There is ample room for big paddlers. The plastic thickness seems adequate although the finish is a bit dullish. Want it or not, you get the GoPro mount drilled into the deck.

The bottom line is that you have a river runner that compromises a few of those performance traits for some of the capabilities of a creeker. If you desire a high performing creeker or a river runner up for some real gnarly stuff, you should include this on your list to try out.

I wanted a river running…

I wanted a river running kayak (started on a Jackson Hero) that was fast, lower volume, and lightweight. I was hoping to get the Zen 65 but after speaking with the Jackson reps at Paddlefest and trying to get my long legs inside the 65, it seemed to make more sense to go with the 75 since I was on the top end of the 65's weight range.

The Zen is very stable and maneuverable and does surf easily. For its given length, it is actually pretty light, especially compared to the similar boats by Pyranha, Wave Sport, Liquid Logic, etc.

The only problem I've had is the foam that is under the seat that elevates your thighs has be causing my leg to get a little numb. And actually a kayak instructor had told me he had similar issue. However, I think with some adjustments and tweaking I can fix this issue. As with any sports equipment, you have to spend some time getting it to fit you. Ultimately after paddling all the boats in this class, I felt the Zen was exactly what I wanted. Mine is the orange crush color, love it!

About a year ago I was…

About a year ago I was looking for a new kayak. I have a few different types of kayaks already including a sea kayak, playboat, and a crossover. I wanted to add a river runner. Something that was fast and carved corners like a figure skater. After talking with some friends about what they were paddling I had it narrowed down to a few models so I located a dealer and drove down to demo them. I was driving 5 hours one way and wanted to make sure I was happy with the boat and that it would perform the way I described. I had called the outfitter and gave him my "needs" list, he listened and then replied "you want a Zen" It was NOT on my list but took his advice and paddled it along with the three boats I was interested in. At the end of the day I drove home with the Jackson Zen.

I was able to do attainments, it rolled with little effort and was very stable. Its a fast hull with great manuverability. I have had this boat for one year and am very happy with the way it handles. I did make a few adjustments to the outfitting. I added some padding under my seat for thigh support. Then for the strings that adjust the seat back I enclosed them in a piece of neoprene that I cut and wrapped around the strings gluing them at the open end to make a "tube" enclosure still allowing me to adjust the seat back for a good tight fit. I find that I paddle this boat more than anything else I own.

I've paddled the Zen 75 for a little over 2 months now on some good solid class 2 rapids. I also own the Rogue 10 which I love. My goal is to get into at least some class 3 rapids and learn to roll (I get close but keep carping!!)

The Zen is really a nice boat for surfing and is very comfortable. I love the adjustable foot bulkhead. Pull the cord and push with your feet for the right fit. It's a breeze to adjust. No screws or bolts to mess with. The seating is very comfortable. I really like the way it maneuvers and it's superb stability.

The previous reviewer is "right on" with his remarks. If you are interested in a "white water" boat I can highly recommend the Jackson Zen. I'm 65 years old and I'm lovin' this boat.

Reviews are filtered through…

Reviews are filtered through the prism of our preferences and experiences. In my case, I was not thrilled by river runners trending toward shorter (slower) lengths, soft chines and bulbous volumes. A few years ago, one manufacturer bucked the trend and I jumped on it. It was okay, but the hull was semi-planing and the edges weren't aggressive enough to suit me. Then, the Zen cometh.

It's long by today's standards, so it's got the speed for attainments. You can almost shave with the edges, so it'll carve turns. The volume is in the right places and doesn't inflate the hull where you don't need it.

The footboard is easy to adjust when you're on the fly. The backband employs the Jackson design, which is to say, simple, lightweight and easy to repair in the field. Inside is a carry loop to take some strain off the shoulder. Nice touch. The knee pockets are somewhat low, giving it a snug, old school feel of control. And, it's a full-on planing hull for great surfing. Jackson has also gone with duel bottle holders and has improved the grab handles..

The result is a kayak that responds when you go to the whip for attainments or need a burst of speed to hit the right line. It tracks okay (little too much rocker for my purposes, but I understand that in a boat this long) but put it up on the hard edge to get the bite you need for a tight carve. It's stable, predictable and rolls well. And, it loves to surf.

In short, it's a pure river runner that hasn't been dumbed down with soft edges and bulbous ends. If that's what you want, give this one a try.