by NRS
Details
I've worn the same pair of NRS Kickers for the last 3 years and they show little signs of wear, though I am a frequent paddler. They are a bit of a struggle to get on if bought to size, but that's actually a good thing as they completely prevent sand and other grit from getting in. They are also quite comfortable. The soles are thick enough to provide a level of security when wading and are grippy enough for secure portaging.

As with any neoprene product they can get smelly, but that can be mostly solved by wearing ankle- high antimicrobial socks and routine washing.

by Hurricane Kayaks
Details
I've been paddling this boat for about 2 months now and thought I'd pass on initial impressions.
The Boat: length = 14', width = 28", weight = 51lbs, capacity = 325 lbs. Hull configuration = V in bow and stern, rounded mid-section. Comes with bow and stern handles, side handles, large front hatch with snap-on cover, small hatch behind seat with screw-on cover, scuppers in foot-wells and rear cargo area, and deck rigging for cargo area. (This is probably a 2008 model, but I bought it new.)

Other Kayaks: Tarpon 100, OK Scupper Pro TW, Epic V10. (I mention these only because there are a few comparisons to the SP.)

Paddling Conditions: Large, open water lagoon with 20 to 25mph sustained winds. Medium sized river with moderate current and strong winds. Small, twisty, narrow rivers with little current and no wind. Ocean, with lazy swells and mild surf. I spent a day or two in each of these venues and paddled 4 to 5 hours each day. (Let me qualify that. I may have been on the water for 4 to 5 hours, but in some of those conditions I spent time hiding in lee coves.)

Impressions:
Construction...the Trylon seems as advertised - light, stiff, and slick. It's a very pretty design. I didn't see any noticable workmanship issues , though I do have a couple of gripes (see below). Based on experience so far I'd say the Trylon probably is more scratch resistant than plastic, or at least doesn't show as much. However, I've also been told that, while the material is tough, not to go banging it off rocks, as in Class II/III.

Weight....advertised at 51lbs and that seems about right. That's pretty light for a 14' SOT, and I can load it by myself on my van roof without much trauma (Thule Glide 'n Set). However, the side handles are not centered and the bow drops when lifted.

Stability....this was the biggest surprise. Initial stability is exceptional. I took some pretty big wind and wave hits and it was rock solid. I also gave it the wiggle test and stayed right side up. I don't know about secondary stability yet - I'll try that when the water gets warmer.

Tracking....very good. Easy to keep straight without corrective strokes, though it will weathercock in cross-winds - nothing dramatic, and I'm testing with different weights in the stern. There is a rudder option, but I'll think about that after more Chesapeake Bay paddling.

Glide....exceptional for a 14 footer. This thing just goes on and on.

Speed....I don't use a GPS to track absolute speed, but it seems quick, close to my longer SP. It starts up quickly, and I don't find paddling at a good pace tiring. I think the Trylon helps.

Maneuverability....OK, but no better than the longer SP. When turning, it responds better to wide sweeping strokes than to back strokes. I'm sure someone with a better stroke arsenal than I have would do better. As I don't have knee straps I don't know how this boat would respond to edging.

Ride....quite comfortable. It's a surprisingly dry ride considering the low gunnels, and the fact that you sit pretty high when compared to the SP. Even though you do sit up high, especially with a seat, there is a hump in front of the seat pan that makes it hard for water to get in. Even when I took on a fair amount of wave water in the footwells, nothing got in the seat. The V bow sheds water quietly and there is little noticable wake. The scupper system works very well, though I'd be concerned about getting the single drain hole clogged. At my 185lbs there was always about a half inch of water in the footwells - hardly noticable. Someone significantly heavier might consider plugs.

Gripes:
The Footpegs -The whole assembly seems pretty cheap. The rails are flimsy plastic and the pegs are small. My problem is with the positioning. With my 33" inseam I have the pegs in the furthest position. This permits a relatively comfortable leg position for paddling, but with absolutely no room for position change. With pegs I like to shift occasionally between the balls of my feet and insteps simply for comfort, and I can't do that with this setup. My complaint is that there is ample room to have mounted the rails at least 2 to 3 inches further forward, and I have no idea why they didn't. I'm considering removing them all together and using foam blocks.

The Carry Handles - They are rivited on, rather than screwed in. Maybe a minor point, but becomes an issue if they need to be replaced, and was already an issue for me. I wanted to add a Tarpon-style paddle keeper. That could have been as easy as unscrewing a side handle and attaching a short bungee.

The Rear Hatch - Stock, it is a 6 incher with a screw-on lid. However, there is no bag, rendering it virtually useless while underway. The lid is tethered, so you could clip on a pouch, but a bag is a lot easier to work with when you're trying to reach behind you out on the water. Admittedly a minor point, but seems like an unnecessary cost saving measure by the manufacturer. The solution was a replacement hatch, with bag, from Tom's Shop.

The Seat - This isn't necessarily a complaint about the boat, but my particular seat (Surf-to-Summit GTX Pro) and this particular boat. The combination is incredibly noisy. It creaks and groans with every stroke. Not a performance issue, but really annoying, and a little embarrassing in traffic. I'm not really sure what's going on yet, but I think it may be the rear seat straps rubbing on the deck, rather than a slipping seat. Regarding the latter, you really need to firmly secure a seat with tape, or whatever, due to the slickness of the Trylon.

The Seat Attachment Eye Pads - I think this is a design flaw. The pad eyes are recessed into the hull, and while this looks nice, this places the seat brass buckles directly against the hull, under pressure. This has got to wear on the Trylon over time, no matter how tough it may be. I have added 2' loops of nylon to the pad eyes to raise the buckles off the deck.

Summary:
In re-reading this prior to posting, I'm sorry I ended with the "gripes". It seems too negative, as this is really a very nice boat that I'm thoroughly enjoying and plan on keeping it. It looks good, performs well, and is reasonably priced. 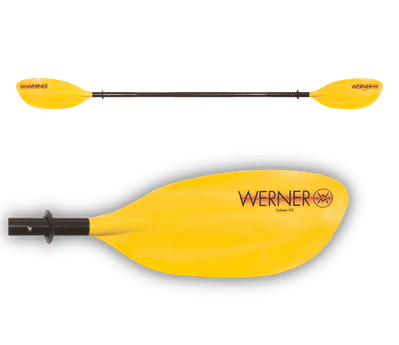 by Werner Paddles
Details
I got a Tybee at REI for $90, the only time I've seen it discounted from $130. It's a very efficient high stroke paddle, but what has surprised me most is it's toughness. I've dug out of sand and gravel shallows with it, banged it off rocks in whitewater, and haven't gotten so much as a scratch or chip. Highly recommend. 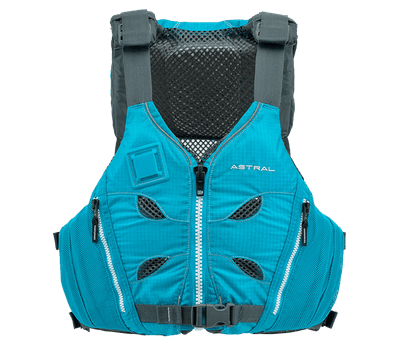 I would second willowleaf. Got the V-8 last year, have worn it…

I would second willowleaf.
Got the V-8 last year, have worn it on about 40 trips, and the final verdict is that you pretty much don't know it's there. My only complaint is the same too - the mesh pocket. Actually not the pocket, but the metal snap closure. It's impossible to unsnap with one hand. Velcro would be better.