I once asked some whitewater experts if they thought 15-16 year old's who had never paddled a canoe before could learn enough (from a good teacher) in half a dozen pracitce sessions to safely canoe a remote Canadian river that has long stretches of Class II-III rapids." The answer was unanimous: No Way!

Now here was a challenge I couldn't refuse! I had taught teenagers for many years and knew that they learn much faster than adults; the problem is getting them to pay attention. But once committed, they're on a roll and you need a snow plow to stop them. In the past, I'd led teen crews down the English, Steel and Kopka Rivers, in Northern Ontario. No problems. It was time for a challenging whitewater run.

I'd been eyeing a small Ontario river called the "Gull," which empties into Lake Nipigon. The remote 60 mile route was virtually untraveled. The Ontario trip guide emphatically stated: "This river is not at all easy to travel; the rapids are very long and the portages are overgrown and difficult to find. It is definitely not a route for the inexperienced canoeist!"

Maps indicated upwards of 30 sets of rapids and two major falls. Average drop was more than 25 feet per mile. One veteran Minnesota camp Widgiwagen guide who had paddled the Thelon and Back Rivers in northern Canada, told me she was intimidated by the Gull. "Too fast... no eddies ... no chance for error. It's beautiful but frightening." When I told her I planned to lead a crew of teens down the river, she politely told me I was crazy.

I contacted Mattie McNair who, along with her husband Paul Landry, authored the revised edition of Basic River Canoeing - one of the definitive whitewater technique books. Mattie and Paul directed the Canadian Outward Bound Camp and regularly paddled the Gull. I trusted their judgment: if Paul and Mattie gave me "two thumbs down," I'd abandon the project.

"It's a tough run, and many portages are a must," said Mattie. "There's no portaging the mile long section around the burn which rates Class III at the top." Mattie sent me a hand-drawn map which detailed the major dangers. My Gull River file was a half-inch thick and growing!

The final count for this trip was twelve - four boys, four girls and four adults. The adults had done several Canadian rivers but the kids were clueless about moving water. Their canoeing education would have to begin at once.

Equipment must reflect the challenge: No blue jeans, plastic rain suits or bulky sleeping bags that consumed half a pack. Military surplus woolens, discount store acrylics, polypropylene and nylon were the rule. Every kid had his own Christmas wish list and I checked off the items as they appeared.

Dry Land Training We fitted our Old Town Discovery canoes with knee pads, wood yokes and 25 foot long tracking lines. Every boat was numbered and assigned to the crew responsible for it. Participants were required to memorize a list of safety rules before they were cleared to paddle. There was "homework" and the admonition that "If you don't do it, you don't go!". There were lectures and instructional handouts on paddling techniques, hypothermia, wilderness first aid and safety. I showed Bill Mason's film, "Double's Whitewater" at every meeting. Partners lined up, paddles in hand, and dry-practiced what they saw on the screen.

On-the-water training began with maneuvering on a quiet pond. Switching ends could cause confusion so each youngster decided at the start which end of the canoe he or she would paddle. Students were required to master the four paddling strokes below. With these, they could do all the maneuvers needed to avoid obstacles:

By combining these strokes, canoes could be side-slipped, pivoted around obstacles and stabilized when crossing eddy lines.

When everyone had mastered the required strokes we headed to a local stream that had a "muscled flow", but no dangerous rapids. Here, we practiced eddy turns and ferries without the danger of hydraulics which accompany big waves. By day's end, all had the procedures down pat. Our next training run would be on Minnesota's Snake River - a class II whitewater run at moderate water levels.

The Snake River Test I stood at the water's edge that cold gray morning and stared at the yard high rollers that crashed against the bridge pilings. The water temperature was 48 degrees. Current speed? At least ten miles an hour! This was no place for an inexperienced crew!

For awhile, I considered aborting the trip, but we had driven two hours to get here and it was our last training run. The Gull would have waves like this-- better that the kids should learn to control their boats in them now. We had intended to practice eddy turns and side-slip maneuvers but the huge waves made this too dangerous.

"We'll practice backferries today; if you guys can ferry in this stuff, you'll have no trouble on the Gull."

I set the example, and the kids followed. When the river turned, we angled our sterns towards the inside bend and vigorously back paddled. The "backferry" took hold almost immediately and the canoes danced sideways across the river, with no downstream slip. Too bad there were no onlookers to impress.

Then, round the bend, we passed a red Coleman canoe with two men who were not wearing life jackets. A case of beer and mound of personal gear weighted the craft to dangerously low freeboard. We exchanged waives then parted ways-we snugged the inside bend, they the outside. "Ferry right, herd 'em over!" I commanded. The men in the Coleman gaped at our near broadside approach.

"You're s'posed to take 'em down the middle!" one hollered. No answer-- they wouldn't understand.

The Coleman powered around the bend while we ferried into an eddy, then put ashore for lunch. Thirty minutes later, we were back on the water, cautiously bumping our way down the shore line. "Look there," I pointed. "See how those waves are piling up on the outside curve? Good thing you guys can ferry or you'd be in that mess."

"Hey Cliff, what's that red thing over there?" pointed a boy. I squinted through my bifocals. Held tightly in the huge sweeper was the Coleman canoe we had seen earlier. There was no sign of the paddlers.

The kids said little for the rest of the run. They just duitifully followed me, duplicating every movement of my canoe. I valued their trust and prayed I wouldn't screw up.

Two hours later we reached our take-out point on the St. Croix River, and I breathed a sigh of relief. As we pulled the canoes up the gravel beach, a straight-faced State Trooper walked up and asked if we'd seen a red canoe upstream. "Yeah," I answered. "Wrapped around a tree about five miles back."

"Those guys were scared white when I picked them up. Said a bunch of inexperienced kids were on the river and were sure to drown. Said you guys couldn't even paddle your boats straight. They said I better get her fast, maybe get jet boat and go upstream to help."

And they certainly did! They canoed the Gull River without incident. No one capsized or became seriously stuck. Whenever dancing horsetails loomed ahead, the kids would reverse power and "backferry". It was a proud and cautious sight!

A thoughtful note: Whitewater junkies frown on backferries. They spin their hot sport boats 180 and forward ferry to safety. Try this with a sluggish tripping canoe and you will swim! 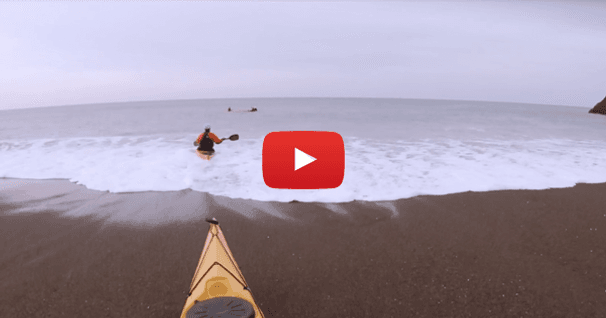