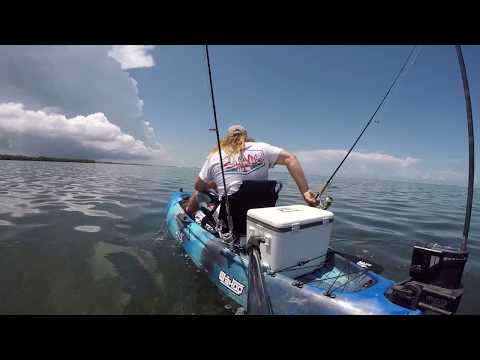 Read and submit reviews for the Wahoo 10.5.

Read reviews for the Wahoo 10.5 by Kaku Kayak as submitted by your fellow paddlers. All of the reviews are created and written by paddlers like you, so be sure to submit your own review and be part of the community!

I spent months reading reviews, watching videos, and demoing several different kayaks. I originally was set on getting a pedal drive (Old Town, Feel Free Lure, or Hobie) but finally decided I didn't really need one. I had heard about Kaku via social media but the closest dealer to me was 1.5 hours away. I made the trek and bought it after trying at least 5 or 6 other paddle kayaks. I've used it several times and here are my thoughts.

I was so impressed how well the Wahoo paddled and tracked compared to the others in the same price range. I recall another one may have been faster but it was more expensive and bigger. I didn't want something bigger than 12 feet. I wanted one I could put in my truck without a bed extender and one I could transport by myself. (This dealer also had the 12.5 out back wrapped up and it seemed HUGE to me).. Since I've had it on the water, sometimes it doesn't track as well as my first time demoing it but this is probably due to my paddle style, weather conditions, or due to my son being on the back sometimes. My wife is small framed and had no trouble with it on a bay with some small waves/wake with our son on the back (he's 8 and weighs about 60 lbs).

I love the simplicity of the Wahoo. I'm 6'1", 225lbs. It has plenty of room for what I need and the right amount of features (2 rod holders, dry storage, adjustable foot pegs, deck storage area). It is just light enough for me to carry by myself short distances but it is difficult and bulky/awkward. I got a basic cart and it can be difficult getting it on and staying on due to the hull design. The seat is very good but I haven't been out longer than an hour or two. I did have minor issues (see below) but they were immediately addressed. It is very stable but I have not mastered standing up for long periods in it yet.

The best part about this kayak so far has been the customer service. They are a small, fairly new company out of Florida and are very attentive to their customers. The owner himself reached out to me to address a small tear in my seat and when another issue arose, customer service responded almost immediately to address the issue. Overall, very happy that my extensive search landed on the Kaku Wahoo.

When I received the Kaku...

When I received the Kaku Wahoo 10.5 in April this year, I noticed the surface of the plastic body of the kayak had porocity (small bubbles) in several p!aces, stern and port side. The open cockpit floor was bowed up and has a lot of flex when standing. I have had the Wahoo on fresh water reserviors for a total of 30 hours, fishing and recreational paddling. The seat is comfortable, but the foot rests are not, too vertical. I had to make and attach some wedge-shaped soft rubber pads, which places even pressure on the bottom of my feet now. The Wahoo is easy to paddle but not as fast as I like. It turns fairly quickly, and takes large boat wakes very well. The Wahoo has an aggressive tri-hull design, making it very stable, but very noisy. Water SLAPS the underside making a lot of noise. The sides of the kayak are sloped out and down, so you can sit sidesaddle while fishing. The cockpit floor flexes qiute a bit when standing. It is however, covered with a comfortable deck mat. The Wahoo is 33 inches wide, I'm 5'-9", using 240mm paddle. I would like to try a 250mm paddle to see if it makes a difference with my paddling. The Kaku Wahoo 10.5 is a nice flat water fishing kayak without bell and whistles, but I am wishing I had bought the 12.5, which has more room and is faster.

Very nice and versatile product! It fits easily into the back of my truck and I take it EVERYWHERE! I've used this thing in small ponds, large lakes, and even in the river! It's nice to have so you can sneak up on those bass, catfish, and sunfish that like to hide in the security of tree cover (inaccessible from the shoreline)... Thank you for an AWESOME product!!!

These are such amazing...

These are such amazing kayaks! I personally do not own one (yet) but I know someone that does own one and they love theirs!

what can i say, summer is almost done and i was able to stress-test the 2017 Kaku Wahoo 10.5' kayak at the Grand River, . This kayak is a River Monster. it handled the rocks & water with full force very well and its unbelievably stable. The back-park is precise and smooth. Love how the black plastic bottom hull at the back is separated from the main hull, ideal for back parkers such as myself. i checked the front hull after the river run and found no dents and hardly any scratch. It does have its battle scars but that's about it. Kaku Wahoo is highly recommended.!!