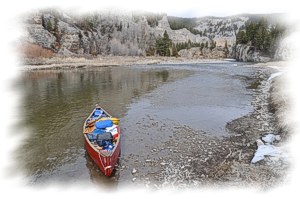 The Smith River in central Montana is a hidden gem. The 65-mile river runs the length of a deep canyon where the river twist and turns through ancient geology, forested mountains, and complete solitude. The SMith is a "permit" river so most people apply the previous fall/winter for the following season. HOWEVER: a hidden trick is to go before the permit season which starts around the 12th of April. I called the permit office just a few days before our departure and got permit #1...First boat of the season!!

The flows were running at only 147 cfs which in my opinion is a little too low especially in a loaded canoe. It would have been much better at about 180cfs or above. In fact we hit and dragged over so many rocks that my MR royalex canoe appeared to look as if it were a 30- year old canoe by the time we finished. I wore through the paint layer and into the royalex. We hit more rocks in 5 days than all the rivers I've paddled in the last 30 years combined! It was no big deal to me, just part of the journey.

We had to be on constant watch for submerged rocks the entire trip. Many lay just under the surface. The canyon was just amazing. Like a giant slough cut through the earth. Five hundred foot canyons rose up out of the water and giant ponderosa pines watched over every bend. There was still snow in the woods as we paddled the slow current. On day two it snowed so hard that we had a couple of inches on our full length spray cover on the canoe. The sun came out the remaining days on the river which made up for the snow. 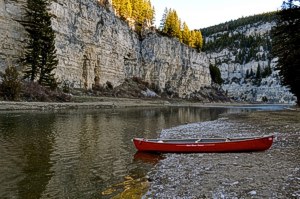 Upon getting our permit we had to list which camps we intended to stay in. This is more critical during peak season since there are many paddlers on the water and they try to space all groups out - which is a great idea. Since we were the only canoe on the river it really didn't matter if we had to stop early due to wind or weather if we needed to get off of the river. A few weeks after our trip, I had heard of several groups encountering 30" of snow one night. They had to dig out their rafts since they were completely filled in with the fluffy white stuff. I was glad we didn't have that much snow.

We stayed two nights at upper Fraunhauffer camp which was great. We were able to hike up out of the canyon to a ridge nearly 1000' feet above the river. Once atop the ridge we could see for 50-miles where the terrain was still covered in deep snow.

Our last night out we encountered 70 mph winds in camp. Cooking and preparing meals was a challenge but we managed to whip up a feast which was washed down with many a cold beers.

The final day we encountered three areas of known rapids and since the water levels were so low we had to line the canoe through them. The water was only about 1 foot deep through here with many rocks.

The last few hours the country opens up to more rolling hills and an occasional working cattle or sheep ranch. We had fairly calm winds our final day and made great time to the take out where our car was waiting.

There is a campground at the put in. Get there the day before so you have first dibs on camps. Its a first come first serve basis. Better yet go preseason and you can get a permit the day before like we did.

The put-in is out of White Sulpher Springs Montana. The info pack online has complete driving instructions.


The permit application has all the information you need including shuttle numbers for arranging your vehicles to be taken to the take out.