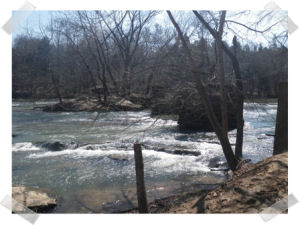 The start of this annual "dumb but tough" trip was on Sunday, March 7, 2010 when I packed up my canoe and gear and headed for the two and half hour drive to Lexington, NC to spend the night with my friend Wayne and his wife Lynda. Wayne and I, along with another friend, started these "dumb but tough" trips around 2005 and many are posted on Paddling.net:

The Black River, Lumber River, and Neuse River in NC and the St. Marys River, Withlocoochee River and Satilla River in GA.

We call them "dumb but tough" after a phrase my brother coined, "If you're gonna be dumb, you gotta be tough." The last two trips, Satilla last year and this trip the Enoree have been made by me and Wayne. That night in Lexington, we feasted on bbq chicken wings and beer; next morning before we headed out, Lynda fixed her world famous omelets.

On Monday, we left Lexington, headed for the Enoree River with a stop in Newberry, SC to pick up a friend. David, who was shuttling for us and would keep Wayne's truck until we got off the river as to not leave a vehicle at the put in or take out. After a three hour drive we made it to the Hwy 34 Bridge at Strothers landing on the Broad River, our take out point, so I could mark the GPS. Soon we were on to Newberry, SC about 15 miles away to pick up David and head to the put in at Musgrove Mill Historic Site off Hwy 56 in SC. This is exit 52 on I-26 and the Clinton, SC exit. The put in at Musgrove Mill is across the Enoree River from the historic site and near Horseshoe Falls.

Here is the website for Musgrove Mill Historic site:
www.southcarolinaparks.com/park-finder/state-park/3888.aspx 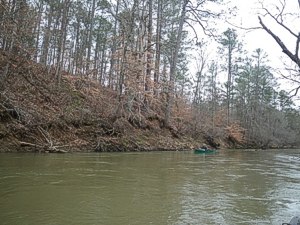 After unloading the truck and packing up in our two solo canoes we were off headed down the river at noon. We crossed the Hwy 56 bridge after about five minutes and a half hours later at mile 1.07 we found a sandbar for lunch across from Musgrove Mill Golf Course. After 6.1 miles we crossed under Jones Barrel Stave Bridge and a foot bridge across the river at mile 6.9. This footbridge appeared to be a hiking trail through the Sumter National Forest.

Finally at 3pm and 7.3 miles we found a nice huge sandbar on river right that was to be our first night camp. We had plenty of firewood and a nice place for the kitchen on the bar and woods for the tents. After setting up camp, a few beverages, we grilled our steaks and vegetable medley. During the days paddle we saw deer, turkey, and ducks. That night at 0230 in the morning, owls serenading woke me up. There must have been about five owls around us all calling out. Later that morning, I could hear turkeys gobble in the distance.

Next morning, Tuesday, the fire and coffee was started and later breakfast of scrambled eggs, country ham, and grits. We took our time leaving camp and pushed off at 1050. At 1215 we stopped for lunch on a sandbar and had travelled 12.7 total miles (all miles will be reflected from the put in). At 3:45 pm we passed a boat landing (22.2 miles) and a railroad bridge at 22.9 miles. At 4:08 pm, mile 23.2 we crossed under the Hwy 76 bridge, and at 4:25 pm we found a nice place to camp (mile 23.8). The camp was a nice little sandbar for the canoes and kitchen area and woods up the bank to pitch the tents. That day we had seen deer, duck and a blue heron. After setting up camp and gathering firewood, we sat around sipping on beverages and started the coals for steak and vegetable medley again. That night, the only sounds we heard were from the railroad we passed a mile up the river. 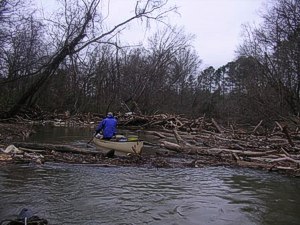 On Wednesday, we got up to a light off and on drizzle of rain. We decided to have oatmeal this morning and got back on the river at 0900. After 25.4 miles we passed Duncan Creek on right, and later Indian Creek, and passed under the SC Hwy 81 Bridge (Brazelman's Bridge) at 33.9 miles. Finally after 35.7 miles and paddling in a light rain all day we decided to find a camp at 1:30 pm. The camp was not a four star camp but we had to find something. It had a little sandbar for the canoes and we had to climb up a muddy bank to a muddier campsite. We quickly set up a tarp in the rain and got a fire going. The more you walked the muddier it got. I can handle the rain but the mud is something else. We were able to set up our tents when the rain quit for awhile. That night Wayne cooked his one pot vegetable beef soup. We sat around and turned in early, too early, about 7pm.

Our last day on the river, Thursday, we got up to rain, ate our oatmeal and coffee, packed in the rain and headed down the river at 0855. At mile 39.7 we crossed under Maybinton Bridge and at 1115 we entered the Broad River mile, 43.7. We pulled over and called David to bring the truck and meet us in about an hour fifteen minutes. Now I know why they called it the Broad, too wide for my taste. We made the take out at 1210 after 46.7 miles and the Strothers Landing was just as muddy as our last night's camp. After taking David back to Newberry, SC we headed home to a hot shower and nice bed.

Synopsis:
The trip was a nice trip, not as long as our other "dumb but tough" trips but nice. Had two good sunny days of paddling. Only saw one person on the golf course the first day, and later we saw a dredging operation with several guys, and the last day several SC DOT persons under the bridge staying dry. This was a remote river, with only two cabins seen and hardly any development. We had one portage around a blocked area of trees and trash, one area we had to pull over a tree, one area had to unblock it to get through, and one area go under a tree and cut some limbs. River level when we started at the Whitmire, SC gauge remained almost the same 16.7 ft with 475 cfs but has since come up.

No fees or permits were required to our knowledge. park Ranger at Musgrove Mill Historic Site wanted to be notified if you left a vehicle at put in. Did not recommend leaving one there.

Take exit 52 off I-26 northwest of Columbia, SC on hwy 56, cross the Enoree and a mile up the road take Horseshoe Falls Rd, put in is located on road past falls.

Take out:
Take exit #74 on I-26 on Hwy 34 travel to Bridge over the Broad River and after crossing bridge, take road to right down to take out.