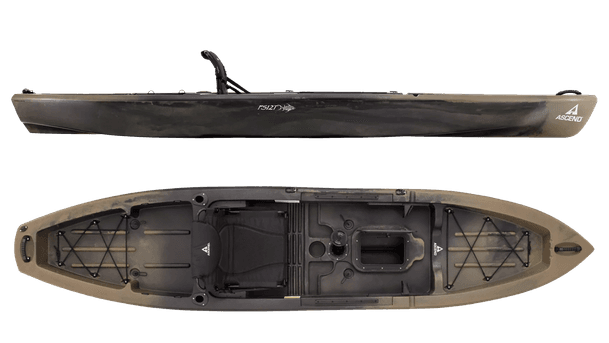 I have had my Ascend FS12T for a touch over a year. I have thoroughly enjoyed it. It has had water up to the gunwales tops. Kept paddling in high winds, and the water kept going out of the scuppers. Extremely stable in rough water. Been in 3' swells from ship wakes and just rolls with the flow. The seat was replaced about 4 months ago. The support straps broke. Easy time doing that with warranty people. The bolts I have replaced and the metal tubing does corrode from saltwater despite washdowns after each trip. I used pipe insulation on the back and this has taken a little of the stress off the bolts. I have remove the tracks on the side and welded the holes up. I do have a small track that I put my anchor winch on and remove my winch after every trip. I wish they had an access in the front and stern. I'm in the process of installing a rudder as this kayak does track towards the wind when paddling. Not a major complaint just a fact of life. I'm planning on installing a vertical panel in the back to run steering cables inside. Enough stuff is outside already. I replaced the front hatch gasket today with a silicone 1/4" x 1/4" adhesive back gasket. The front hatch leaked because of poor workmanship installing the original gasket. Both upper and lower original gaskets had a 1"+ gap due probably to stretching the gasket during installation and then it returned to original length. (Had to be careful doing that when I used to work). I have added anchor trolleys on both sides. I changed the paddle clip to the side because that works for me. The changes I made are what works for me. I would emphasis that fact. The Ascend kayak is a great kayak. I have rubbed oyster beds, trolleyed it to launch and if it was about 30#'s lighter that would be great, but I wouldn't trade that for the thickness of material. For those younger folks, # is not a hashtag it equals pounds. 🤣🤣🤣All in all it is a super great kayak.