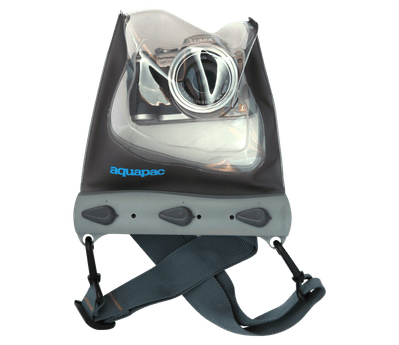 Just a follow-up on my June 2006 review.
We have two Hullavator's on our truck and two heavy Prijon Kayaks. Over two years and they have never missed a beat. Never had a latch or locking problem. They click into the down position and stay down until I release them with the handles. I have been able to handle heavy boats with relative ease and couldn't be much happier. The suggestion mentioned by one of the other users cured the whistle issue.

by Princeton Tec
Details
Princeton Tec Quad. Good light, comfortable, easy to use, color rendition is O.K., but not as good as halogen. Overall, very pleased. In a few years, they will probably be brighter, more accurate color, longer battery life and cheaper...that explains the 9.

by Martin Creek
Details
The neoprene sleeves slide around and can easily expose your boat to direct contact with the rack bars. The bars themselves are soft and fairly easily bent or twisted.

by Thule
Details
I waited for the new Hullavator XT's to become available and received two sets a couple months ago. I mounted them on my Yakima bars with Q-Towers since Yakima is the only rack for my F-150 Supercrew. The first outing went pretty good until the we were on our way home. When we stopped, we couldn't open the doors without damage to the paint at the top of the doors... The Q-Towers had come loose on the bars and the clips had pulled the bottom of the Q-Towers down over the top of the doors. This was caused by the weight and leverage of the Hullavators twisting around on the bars and the Q-Towers working loose. I called Thule and Yakima. The tech rep at Yakima was both helpful and understanding. My Q-Towers were about a year to a year and a half old and locked on the bars with a cam action turned by an allen wrench. He said Yakima had since changed the design of the Q-Towers and they now held the bars more securely. He sent me an updated set of Q-Towers (my clips and locks transferred from the old Q-Towers). I put everything together and although we haven't been out on the road yet, I can't imagine any more serious trouble. The new Q-Towers clamp securely around the bars without any 'travel'. The twisting/torque on the bars shouldn't have any effect on the bars and towers.

The Hullavator's do what they are supposed to do, you just have to learn to let them help raise and lower the kayak. It takes a little getting used to, so don't panic or be hasty. One area I would like to see improved is a faster tie-down of the kayak to the Hullavator cradle bars. They are also heavy, so you will want to unhook and remove the Hullavator's before removing the rack system. It's actually quite easy. Another advantage of the Hullavator system is that it is easy to drop a boat down to access the cockpit, install covers, or clean the boat.

After our next outing, I'll report back if we have any more problems.

by Onno
Details
I have a Full Tour Carbon Signature paddle. The length and Full Tour configuration were the result of discussions with Pat. After he questioned me, he made the recommendation and the results are perfect. I probably would have purchased a different length and a bent shaft paddle, but it would have been an expensive mistake.

Quality is first class, no frills. The paddle is light, has good catch, power, release and great feel. Blade size is perfect for my paddling cadence and the length is right. Pat also made a Full Tour Carbon Signature paddle for my wife and she loves it - from the first time she used it, she says it "feels like a natural extension of my (her) arms".

Very reasonably priced. If you call Pat, be patient. It's a one man shop. When he does talk to you, he will pay attention and guide you through your options. He really knows paddles.

by Pacific Designs
Details
I have used my T-1 for a season now and I can share some observations.

The Good - The paddle is fairly light and with synthetic cork handlebar tape, it is comfortable to use. It is three pieces, so it can be tucked away easily.

The Not So Good - It isn't very strong, so you need to be careful with it. The lock buttons can be lost easily - they are not captured in the paddle shaft very well...this could really be a problem. The blade shape is not too sophisticated and it is nearly impossible to paddle cleanly with this paddle - you will be pulling air under with most strokes and making a bunch of noise. The paddle doesn't have much catch, so aggressive paddling gets really sloppy and wastes a lot of energy. It isn't good enough to accept its weaknesses, nor strong enough for going where it get rough.

Steve tries hard to please with this paddle, but I just don't think it is worth it. 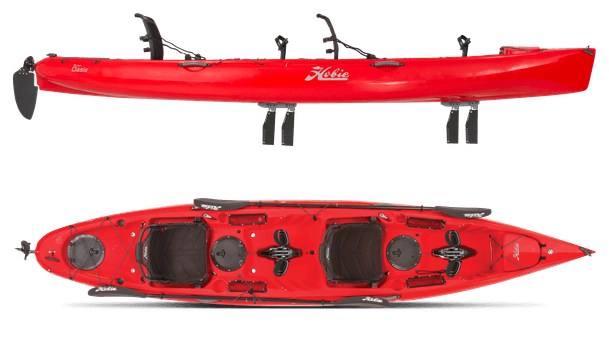 by Hobie
Details
My wife and I rented a Mirage Tandem today since we are considering adding a tandem kayak. We wanted to try the Mirage 'Hydro-Sail' system due to its reputation for being fast.

The kayak can definitely move quickly when peddled hard and fast, but not without considerable effort. The hull itself seems large and slow, so it's more of a production to move than a normal kayak.

We are used to sit-in kayaks and the Hobie is a sit-on-top. We couldn't feel the connection with the water that we are accustomed to with sit-in style boats. It was more like a faster, narrower peddle boat found on city lakes. The 'Hydro Sails' also cannot be used when the water gets shallow (18"+/-). Not a problem in some areas, but shallow water is a common problem in many of the lakes, rivers and tidal areas we frequent.

Paddling the Mirage is not really a way to get anywhere. The paddles are for backing and slow, tight maneuvering. The boat just wasn't built to be paddled (the rudder is controlled by hand and it IS NEEDED).

I guess what I'm saying is that it is shaped like a kayak, but is much different in practice.

Lastly, when we put it on our truck which is equipped with the Thule 'Glide 'N Set' racks, the bottom of the hull appeared soft and deformed a lot under its own weight (hull weight only). 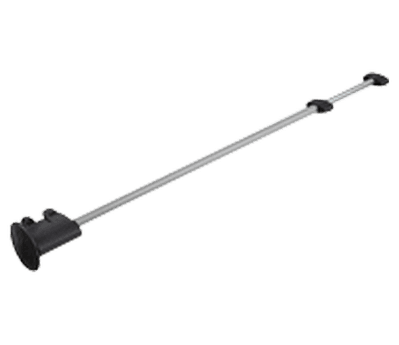 by Yakima Products, Inc.
Details
Absolutely useless. Loading from the side might work on a low car, but on a truck or SUV, it's too high. Plan on a system that allows you to load from the rear.

by Roleez
Details
What a neat cart! The 'Toon wheels just roll along over just about anything. Even going over curbs with a 60#+/- kayak is no problem. Items for possible improvement would be: 1) Faster, simpler tie down system. 2) This cart doesn't just tuck into a rear hatch, it's big with those big wheels.