Two quick notes to start with. First off, the Patriot I…

Two quick notes to start with.
First off, the Patriot I purchased is under the Perception label but every photo/spec I can find online says Mainstream makes them. Second, the only reason I gave an 8 and not higher is that I only have one other kayak to compare the Patriot to.

Now that I have that out of the way all I can say is "wow!" (Ok, maybe more than just one word.)
In March of 2008, I stopped at the local MC Sports and saw they had the Mainstream Streak. At that time the Streak seemed like the kayak for me. I slowly started saving up for one. The more time went by though, the more I realized the lines on the Streak weren't quite what I wanted, and the storage space didn't seem quite up to what I was hoping for.

Today I got to work and found a friend had left me a clipping from this week's MC Sports ad. In lovely full colour was a beautiful looking Perception Patriot in shades of blue. The length was longer than what I originally thought I wanted, but the more I dug around online (took me hours just to find the reviews on here for the Mainstream Patriot) the more I found good reviews and listings for the Mainstream Patriot. After studying what pictures I could find, and specification listings, I concluded the two 'yaks were more than likely one and the same. As soon as I was finished at work I stopped at the store and bought my first "real" kayak. I'm still smiling four hours and sore muscles later.

The only kayak I can compare the Patriot with is my Sea Eagle. To me that seems like apples and oranges, so I will just list my likes and dislikes of the Patriot.

I honestly at this point do not have any dislikes about the Patriot.

As far as likes, its seems very stable. Unless I lean almost all the way over the edge when getting in the Patriot never looked or felt like it might tip. Even with jet ski wakes banging against the hull and choppy waters from the wind on the lake I knew the 'yak could handle whatever I encountered this afternoon.

Despite some reviews I have read, the Patriot tracked great! This afternoon during my two hour maiden voyage I encountered rough wave, little waves, and actual areas with no waves at all. The Patriot always went straight to what I had it pointed at, even more so when I was gliding in still water.

I'm not sure how fast I was going today, but compared to the Sea Eagle it felt fast. I'm sure no where near a touring kayak but for a recreational one the Patriot seemed quick.

The seat was comfortable (although I am partial to gel seats) and the foot pegs left even my short legs (I'm 5'6") in a comfortable position.

I was happy to find a bulkhead separating the aft storage section. Having seen the many different systems for hatches out there the rubber-lid style on the Patriot seemed like a good choice to me. For the type of waves and spray I encountered my gear stayed dry. I also liked how the bulk head left space behind the seat for storing smaller items/bags. The paddle holders on the sides were appreciated as well as the carry handles. Someday I may even try out the pole holders while fishing.

For an entry level rec kayak, I feel the Patriot is worth every cent. It's perfect for my experience level and I can foresee enjoying it still as my skills progress.

As other reviewers have said, this is a good kayak well worth its price and then some!

by Pacific Designs
Details
I'd only had my T-1 for a few weeks before losing it when a friend and I capsized this past weekend. During the time I was able to use it though, I was impressed enough to immediately order a new one as soon as I got home Sunday.

In the past I have used the "kit" paddles that came with my Sea Eagle 330, a higher end paddle my friend owned (the manufacturer eludes both him and myself), and my Pacific T-1. In any comparisons, my T-1 wins hands down. Between the stylish looks, well thought out design, quality construction, and durability I can't imagine getting another paddle.

The first thing that impressed me with this paddle is that instead of a 4-piece design it is only 3. The backing on the blades not only looks cool to me, but gives the blade more durability (to me) as well as piece of mind that it can hold up to anything I can throw at it. I like the blade sections being sealed, and the flushed connector buttons saved some wear on my hands.

Any contact with Pacific was personalized, friendly, and their shipping speed cannot be beat. Both paddles I ordered only took two days to go from the manufacturer to my house in Iowa. While I've only been paddling for not quite a year now, I would recommend any paddle from Pacific to anyone looking for a light weight, durable, well designed, and affordable paddle. 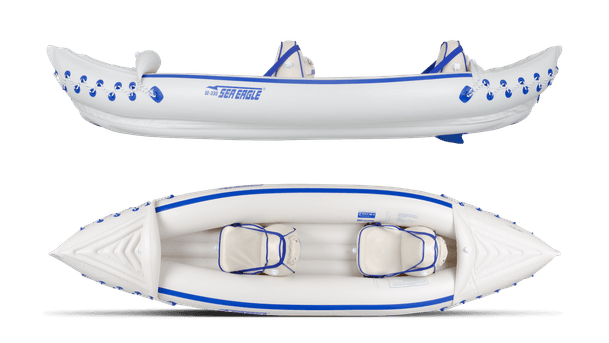 by Sea Eagle Inflatables
Details
I took my Sea Eagle 330 out today for the first time. It was also my first time paddling.
First the bad points:
Inflating the 330 was quick, but the valves for the spray skirts and seats left much to be desired. I don't understand why the one-way valve design for the hull couldn't be used for the seats and skirts instead of the pool toy design that is used.

I would recommend upgrading to the deluxe seats as the standard ones do not offer back support. Having read previous reviews, I set my seats back to back. This seemed to help a little, but not much.

The next negative was that the built in skegs were warped to the left of the kayak. This was easily compensated for when paddling, but still an annoyance.

The only other bad point I had was that there are no bungees. The skirts make a nice place to strap an extra paddle, or a small bag if needed...if you have straps.The included paddles seemed too short to me. Having never paddled before the issue could have been me, but the paddles just seemed like they should have been longer. As mentioned before a strong wind will cause the 330 to weathercock. Fortunately though this seemed easily correctable.

Now for the good points:
Despite the warp in the skegs the 330 tracked pretty darn straight. Other than a lapse in my technique the 330 moved in as close to a straight line as one could expect, especially considering hull design.

Another thing I liked was the amount of room. While not enough for two full sized adults, I found it to be quite adequate for my 5'6" frame. After using some tie-down straps around where the skirts attach, I was able to secure a spare paddle up front, and a small water proof bag in back. There is easily enough room to pack gear for a short overnight/weekend trip if a person is small like me.

The 330 seemed a bit tippy getting in/out, but once out on the water felt stable. I gave the 330 the rating I did because I have nothing to compare it to as it is the first craft I have paddled. It performed as I was expecting it to, didn't seem to have any limitations I wasn't already informed of, and over all is a fun little craft for someone like me who isn't able to get out often or for very long.