by Native Watercraft
Details
I purchased a composite Native Ultimate Elite 14.5 several years ago and paddled it about six times before trading it for a Kaskazi Marlin. First of all, call the Native Ultimate what it is, a low-profile canoe. This is not the boat you will want to be in when there's a foot or more of chop, especially with two people on board. Be certain to have a hand bilge pump on board at all times, or a pair of good swim fins. There is also considerable hull slap and, when I've fished with others who own Native Ultimates, I can hear them from a good distance away due to the hull slap. Perhaps this is a result of the tunnel hull.

It's not a bad fishing boat in quiet water, like small lakes, protected bays, or streams. Like others have noted, the sides flex easily, both in the plastic and the composite models, and most of the accessories they offer that attach to it are cheap plastic gadgets.

Tracking is good, it's relatively easy to stand in, and the composite model is plenty light enough to carry for short distances. However, if it's a canoe you want I'd recommend a conventional canoe over an Ultimate. If it's a kayak you want, I'd prefer to be in a conventional sit-on-top kayak.

by Kaskazi Kayaks
Details
I am now on my fourth Kaskazi Dorado, manufactured in Cape Town, South Africa with an importer in Boca Raton, Florida. My first one came after owning a Hobie Outback (too fat and slow), a Malibu Extreme (too heavy and slow), a Native Ultimate Elite (too flimsy and noisy), and a Wilderness Systems Tarpon 160 (one of the best polyethylene kayaks on the market, but still rather heavy).

My first three Kaskazi Dorados were the original fiberglass models, but my newest one is a fiberglass/carbon fiber Kaskazi Dorado II, which has a slightly wider seating area, longer foot wells, and a roomier fish box that will also accommodate 7' rods. The Dorado II is 15' 10" long, 24.5" wide, and is an extraordinarily fast and seaworthy fishing kayak.

While American manufacturers are putting out more and more wide, heavy, plastic fishing kayaks, South Africans are making them narrower and faster. Few American manufacturers make composite sit-on-top fishing kayaks and, when they do, they're usually under 14' in length. The Kaskazi Dorado II excels as a fishing craft, being able to handle ocean conditions with ease, and the seating in the Dorado is more comfortable than most SOT kayaks and, because you're sitting below the waterline, it is exceptionally stable.

The Dorado comes standard with three flush-mount rod holders, a custom-fit low-profile crate, toe-pedal rudder system, two compartmentalized hatches with spin-on covers, and anchor trolleys on both gunwales. The fish box chute is between your legs and can be used to stow rods and other gear as well as fish. I find it interesting that hardly any American-made fishing kayaks have a dedicated place to stow your fish.

In short, if you're looking for a fast, stable, seaworthy fishing kayak, this is one you should look at. It'll leave the wide plastic kayaks far behind, and speed translates to ease-of-paddling, so you'll be less tired when you get to where you're going. Plus, it'll open up more water for you to fish because a 10-mile one-way paddle is nothing in a Dorado. 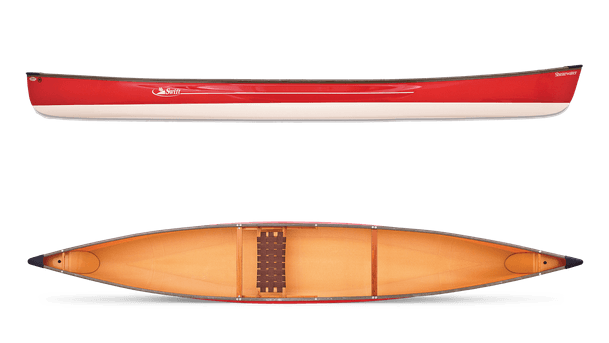 by Swift Canoe & Kayak
Details
In February 2010 I ordered a Swift Shearwater in kevlar with carbon rails, a sliding seat, and a bar foot brace (instead of the kayak style foot braces). I chose Killarney green gel coat. It arrived in April in perfect shape, and the shipping weight was 34 lbs. The canoe is so light you can pick it up with one hand and carry it like a suitcase.

Construction and attention to detail deserves a 10 rating. It's stunningly beautiful and not a flaw anywhere. It has cherry thwarts, bow & stern caps, and seat frame.

My first outing was in Biscayne Bay, very lightly loaded, and with a moderate easterly breeze. I used a carbon fiber Epic 2-bladed paddle and a bent shaft Voyageur canoe paddle. Both moved the boat effortlessly, and it tracked perfectly straight into a quartering wind. It's plenty stable enough to stand in and has very good initial and secondary stability too. I'd say it had better stability than the Wenonah Prism that I test paddled when I was shopping for a solo canoe.

My second outing three weeks later was a fully loaded 10-day, 129-mile solo excursion in Everglades National Park, paddling along the edge of the Gulf of Mexico, on tidal rivers, and in open backcountry bays. The canoe had some initial difficulty tracking, and kept wanting to turn into the wind. I attribute this to it being loaded incorrectly and, once I readjusted the load, placing more weight toward the stern, this alleviated the problem considerably. As days went on it tracked even better because I was lightening the load by eliminating the weight of water and food each day.

Fully loaded the Shearwater was still capable of reaching 5.8 mph on my GPS, and it maintained 3.3 mph without much effort at all, mostly using a 2-bladed paddle.

I'm giving my Shearwater a 9 rating, rather than a 10, solely because the washers on all of the stainless hardware began to rust after being exposed to saltwater. This was a minor fix but I had to act quickly before the rust discolored the carbon rails. Perhaps not too many Shearwaters are used in saltwater, or it may not be something any Canadian canoe manufacturer thinks about. Keep this in mind if you paddle one in saltwater.

Overall, this canoe is superb and I would highly recommend it to anyone wanting a fast, stable, solo canoe for day tripping or excursions up to ten days. You could probably get two weeks worth of gear in a Shearwater if you paddled in freshwater. I brought 12 gallons of water on my 10-day trip, which is 100 lbs of water. Paddling in freshwater would allow you to sterilize the water for drinking, and use it for cooking, thereby saving considerable weight.