Observations from Canoeing the Buffalo River

The national wild and scenic Buffalo River in Arkansas is one of the finest canoeing rivers in America. I've done it twice, most recently, this April. We canoed from Ponca to the White River--a distance of around 130 miles. Administered by the National Park Service, the protected Buffalo is one of the few remaining un-dammed rivers in America. With the exception of some well-maintained Park Service campsites (with room for dozens of tents!), there is no development along the shores. The scenery--which consists largely of high, rugged bluffs--will remind you of the film, "Deliverance". Spectacular views, champagne-clear water, great fishing and inviting campsites define the route. And, oh yes, there are NO portages! 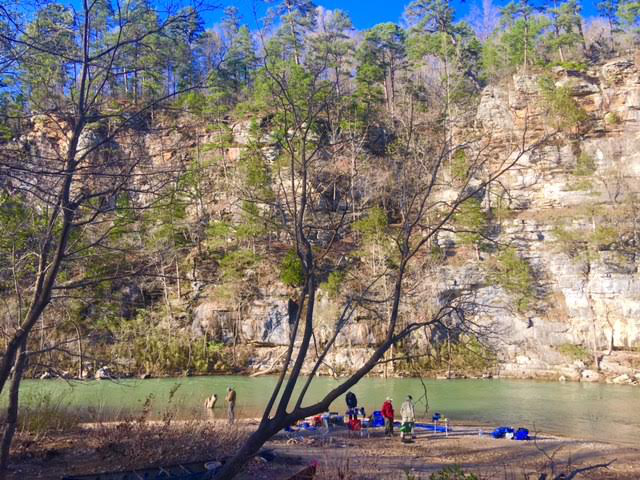 The river bed is rocky; a heavy rain can quickly drive up water levels.  Indeed, the river has been known to rise more than 10 feet in a single day, so you're wise to camp well above the water, even if you don't suspect rain.  Many canoes have been lost by paddlers who didn't take this advice seriously.  As a precaution, canoes should always be tied to a tree before you retire.

April through early May is the best time to paddle the Buffalo.  Come earlier and you could have snow and impossibly high water.  Go later, and the upper stretch--from Ponca to Gilbert--may be a long, slow drag.

My first run down the Buffalo was in 2010.  The water level was low (the gauge read 3.5 feet) which resulted in an easy float with considerable wading.  Rapids in the upper end (near Ponca) ranged from riffles to shallow rock-gardens.  It was an easy run for our little solo canoes.

Flash forward to our recent run in April 2017.  The river was three times higher than before.  The gauge read just under 9 feet!  The river was deeply in the trees, the sprawling gravel bars of 2010 were gone;  average current speed (according to my GPS) was just over 5 miles per hour.  Add light paddling and 7+ miles per hour were the rule.  What were riffles in 2010 were now powerful currents and real rapids.  It was a much "different" river!

There were five of us and we all paddled solo.  I paddled my well-used carbon-Kevlar Bell Yellowstone solo canoe.  My friend, Larry Rice (a well-known writer) piloted a Kevlar Bell Wildfire.  There was an old but barely used fiberglass Mad River Traveler and a Royalex Bell Yellowstone tandem canoe. The YS tandem was fitted with a single bucket seat in the stern.  The front seat had been removed to provide space for gear--too much gear!  I estimate more than 300 pounds of it!  The load came well above the gunnels and was tightly lashed in place with cam-straps.  The paddler (we'll call him "Jim") sat "way in back" on a padded tractor seat.  We tried to enlighten him on why he should paddle from the middle of the craft, but he wouldn't listen.  He said he had always done it this way and it "worked for him".  His stubbornness caused a serious problem on day two of our trip, as you'll read below.

Some take-aways from this trip:

Shortly after we put-in at Ponca, we passed a group of about a dozen young ladies of college age. Only one was wearing a PFD. It may have been the old teacher in me, but I just couldn't keep silent. I hailed the girls and launched into a polite rant, outlining the dangers of not wearing a PFD on this fast, cold river. I concluded with:
"Don't hate me girls, but you don't know how quickly bad things can happen. But if one of you capsizes you'll find out fast--that is, if you're lucky enough to survive the dumping!"

What happened next surprised me; the girls smiled and put on their PFDs. One girl even thanked me for the advice. I'm guessing that they were peer-pressured not to wear their PFDs and just needed a cranky old guy to point the way. Later that day, one of the girls capsized and pinned her kayak. Fortunately, she got out okay. I'm guessing she was very glad she had listened to this old man.

Over the course of our ten day trip, we passed dozens of paddlers who were not wearing PFDs. This was surprising considering the high, cold, swift water and the mounds of debris that clogged the waterway.

• A man and a woman and two small children (I'm guessing they were about 5 and 6) were paddling a an over-loaded aluminum canoe. There was maybe four inches of freeboard. The kids were wearing life vests; the adults were not. If that canoe had capsized, the couple would have been lucky to save themselves, let alone snag the kids and swim them to safety.

• A young man was soloing a heavily-loaded 17-foot Grumman canoe. He was standing up in back (just in front of the stern seat) and using a long "paddle-board" paddle. An old time "ghetto-blaster" radio was playing music as he stroked along.  There was a headwind of around 20 miles an hour. We were kneeling in our solo canoes; sitting just wasn't secure enough in the wind. Did I mention that the man wasn't wearing a PFD?

• Just before we started downriver, my friend, Larry Rice said, "What do you wanna bet that "Jim" will capsize before this trip is over? On day two, he did. No biggie; the few items that exited the boat were quickly rescued. Things changed on day three. Coming into a Class II boulder garden, Jim capsized again. This time the boat broached on a rock and wrapped; the starboard gunnel (vinyl) tore as the boat bent, then all the thwarts (every one of them!) snapped. Three hundred plus pounds plus of gear (the ice-filled cooler weighted at least 80 pounds!) went floating down the river. It would have been comical to watch if it wasn't so serious. Fortunately, we were able to rescue everything, including the canoe. Once ashore, the problem was how to fix the broken boat. Luckily, the thwarts all broke at the very ends--they ripped out of the screw-holes. We set them back in place than cinched the hull together with cam-straps (see photo below). Remarkably, Jim negotiated the remaining 90 or so miles without incident. Unfortunately, we could not convince him that canoes are best controlled from the middle. 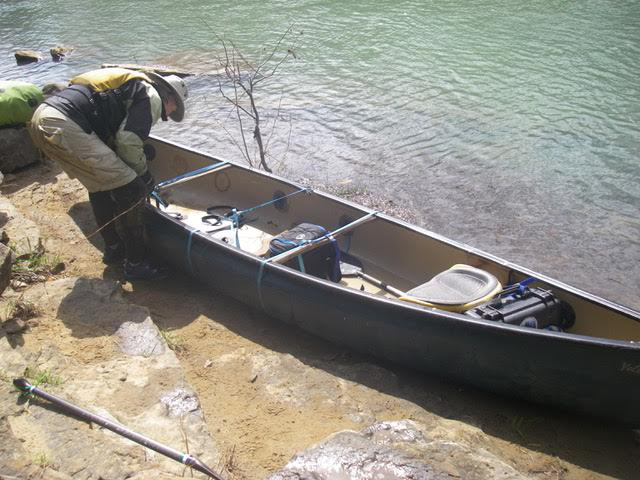 • During our 10 days on the river I did not see a single paddler who "knew how to paddle". When danger loomed ahead they just steered away from the obstacle and poured on the coal. On day six of our trip we came upon a very big, unmarked rapid. The waves near the middle were about four feet high (no exaggeration) and the outside bend was laced with debris. The solution was a hard ferry to the inside bend, running the eddy line around the drop. We were all successful, even Jim. At the base of the rapid we saw some men salvaging a capsized canoe. They looked at our little canoes curiously, wondering how we "did it".

• A very obese woman who wasn't wearing a PFD was "guiding" a group of children down the river. Nearby, a girl of about 7 was soloing a tiny kayak with half (no grip) of a kayak paddle. She was going in circles and banging into shore.

The take-away's here are obvious: disrespect for cold, fast water; not wearing a PFD; believing that if you capsized your young children who were wearing PFDs would be just fine; paddling standing up in a high wind; canoeing rapids from the back seat of a tandem canoe.

The park service rates the difficulty of the Buffalo (based on current water levels) as: "(1) Suitable for beginners"; "(2) Suitable for advanced boaters only"; "(3)Too dangerous to canoe".
Our run rated a healthy (2). There was a storm on day three and the river rose considerably which naturally increased its difficulty. No one we encountered on the river had a clue there was any danger at all.

Bottom line?
Great river; one of the finest runs in the U.S.A. And one of the very few rivers where you can camp anywhere you wish and build open fires wherever you like. The Buffalo is an easy river for those with common sense and basic river running skills. I heartily recommend it. 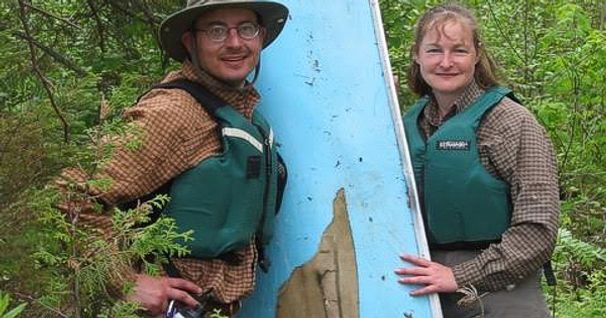 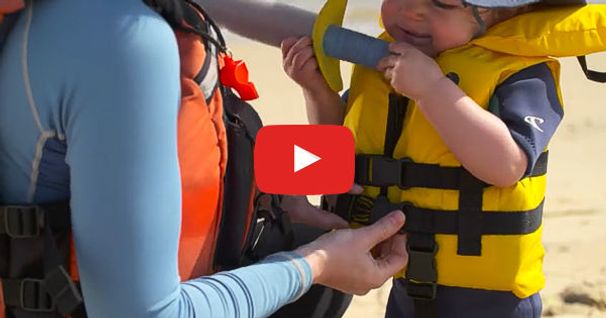 How to Size a Canoe Paddle

You can't do good work without the right tools. A paddle that's too long is awkward, while one that is…