Ask folks what they fear most about canoeing a wild river - where help may be an airplane ride away - and you'll probably get these answers in roughly this order:

FEAR #1:  Bears!
They're afraid they'll get eaten alive by one!  Or, a bear will get their food!

FEAR #2: Drowning.
They fear they will paddle over a falls or drown in a rapid!

FEAR #3: Getting lost.
Many people canoe the same route every season, claiming it's because the fishing or campsites are great. Truth is, they probably don't know how to navigate and fear leaving the beaten path.

FEAR #4: Bug Insanity
Some fear that bugs will drive them mad!

FEAR #5: Being struck by lightning!

FEAR #6: Capsizing in a rapid and wrapping your canoe, or damaging it beyond repair.

These fears are rational, but none of the events are likely to happen.
Here's my take on them:

#1.  BEARS
Black bears: I've had dozens of encounters over the years, but only three were cause for concern. In each case I squarely faced the bear and "talked to him" (really!).  In less than a minute, the bear ran away.

Grizzlies: Most of the grizzlies I've seen on my northern trips high-tailed into the bush as soon as they saw me.  There were two exceptions:  The first was in 1984 along the Hood River, Nunavut.  I was photographing a huge herd of caribou, when three grizzlies (mom and two cubs) spotted me and galloped towards me. I think they thought I was a baby caribou.  I was not armed so I flattened into the tundra, assumed a protective dead-quiet fetal position and prayed they'd go away. They did!

Polar bears: I've had 11 polar bear encounters on my trips to Hudson Bay, all on the North Knife and Caribou Rivers in Manitoba.  Once, a bear chased our canoes across the river several times and followed us downstream for about a mile; another time, a female bear and her cub curiously came into our camp.  We fired a shot over her head.  She stopped and looked up quizzically. I spoke quietly to her and seconds later she turned and ran away, cub in tow. I don't think our lives were seriously in danger in any of these encounters. 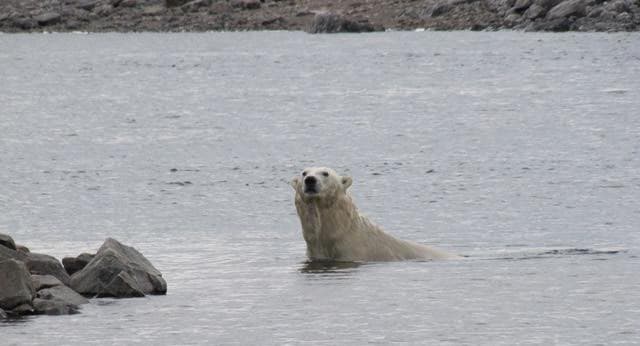 Guns and bears: Admittedly, it is wise to go armed (that is, ONLY if you're competent with guns) when canoeing among the big bears, but even without a gun, if you keep your wits about you, you'll probably be okay.  Bears respond to your body language:  If you look, talk or act frightened, they will take the upper hand.  But if you act in control--but not a threat--they will usually leave you alone.  The real value of a firearm--and to a lesser extent, pepper spray--is that it sublimates your fear and allows you to talk quietly and confidently.

Bottom line? Yes, you could be mauled by a bear, but it is way down the list of things that are likely to happen.

#2 . PADDLE OVER A FALLS OR DROWN IN A RAPID
In all the canoe trips I've made, I cannot recall a single instance of a canoe going over a waterfall. Yes, we've had close calls and capsizes, but people were rescued quickly. If you're wearing suitable clothing and a PFD, your chances of drowning in a rapid are small. You can hear the sound of rushing water some distance away, and your ears quickly become attuned to the gurgle of riffles and the thunder of dangerous drops. When you see dancing horse-tails ahead, you backferry to shore or into an eddy for a closer look. Then, you scout the rapid. If it looks doable, you run it. If not, you line or portage!

Yes, you can drown in a rapid or paddle over a falls, but like "bears", it's down the list of things that will probably happen.

#3.  GETTING LOST
Daniel Boone was once asked if he'd ever been lost.  He thought mightily then replied, "Never lost, just a mite confused once for three days".  Every tripper--from novice to expert--has become confused from time to time.  My longest period of "confusion" (before the days of GPS) was a full day.  Where? In the delta of the North Knife River, Manitoba.  Confusion occurs frequently enough on northern canoe routes that most experienced paddlers assume it's just part of the "wilderness tripping game".

Yes, you will become confused from time to time as you thread your way across big, complex lakes.  But unless you do something really stupid, no harm will come from it and you'll eventually find your way.

#4. BUGS
It has been calculated that an acre of swarming bugs in the high Arctic could drain your blood in about three days!  This said, it won't happen if you bug--proof your body and your camp. Despite the advent of new chemicals, DEET still works best, as do head nets and body nets (like the Susie Bug-net designed by my wife, Sue Harings), and fully-netted tarps and tents.  Bugs may drive you batty, but you won't die from them.  And if you go prepared, you'll be reasonably comfortable.

#5. BEING STRUCK BY LIGHTNING
During a storm along the Gull River (Ontario) my friend's canoe was nearly struck by lightning as it approached what he thought was the "safety of shore".  The top of a tall birch tree exploded and sent debris raining down on the canoe.  The crew was very lucky.  Lightning is a more realistic danger than the others listed above, but in the scheme of things, it's still down the list.

The oft-quoted advice to "get to shore as soon as lighting strikes", is more theoretical than practical.  High winds whip up waves which can send your canoe crashing into a rocky beach. Best stay farther out in the water where you have control.

A cone-of-protection extends outwards about 30 degrees from the top of the tallest tree. Stay within this cone but not so close that lightning may jump from the tree to you. If lightning flashes your camp, sit up on your foam pad, knees pulled to chest...and hope. This position will minimize burns if lightning strikes your tent or a root that goes beneath it. Outdoors books recommend that in a lightning storm you should leave your tent and huddle in a protected low area. Right! I've never known anyone to do this. Exiting a nice warm sleeping bag and protective tent in a howling storm is politically correct but impractical.

#6 CAPSIZING IN A RAPID AND WRAPPING OR DAMAGING YOUR CANOE BEYOND REPAIR.
Those who regularly canoe difficult rivers have plenty of stories about canoe-wraps and damaged boats. But with rare exceptions, and sufficient muscle, they are usually able to salvage the canoes. If you have the right repair materials (fiberglass, epoxy, duct tape, wire, clamps) you can usually repair a severely damaged canoe to "paddleable condition". Ask Rob Kesselring about the Mad River solo canoe a client wrapped in a rapid on the Rio Grande River. Rob fixed the boat "well enough" to finish the trip. Afterwards it went out with the trash--it just wasn't worth fixing. 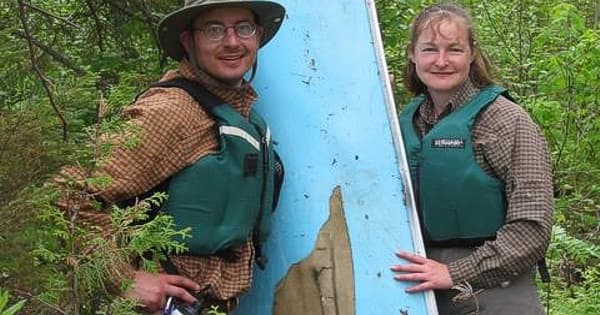 My point of this article: Yes, there are a lot of things that can maim or kill you on a canoe trip, but the real dangers are seldom what you imagine. Next week, I'll look at list of real dangers that should be of more concern than these six events. Stay tuned!

Cliff Jacobson is one of North America’s most respected outdoors writers and wilderness paddlers. He is a retired environmental science teacher, an outdoors skills instructor, a canoeing and camping consultant, and the author of more than a dozen top-selling books. His latest is available as a free download at the following link:  www.cliffcanoe.com 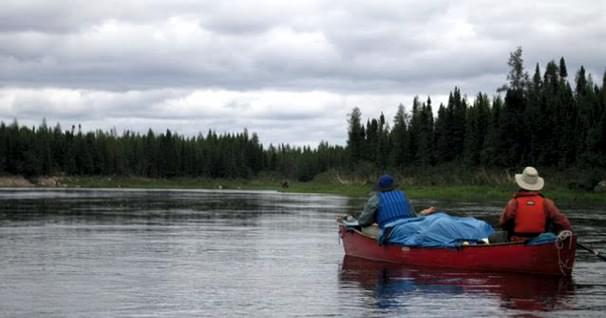