We've had conversations about my neck surgery. More slicings are probably on the distant horizon, but for now I'm good. I have some loss of function concerning my right hand, but that's all. My handwriting is lousy, but my typing skills haven't diminished a bit. You age, you compromise, and you keep your personal bow pointing toward a destination while savoring the journey.

We've also had conversations about my job situation. I managed to find *a* job within a week after being laid off. It is not *the* job, so my search continues daily. It's been said that you never leave fish to find fish. Such is true in the job market now. As with fishing, there is a lot of pressure on the "job" resource these days. Likewise, a small fish (my current job) is better than no fish (unemployment). I do the best I can where I'm at now. However, I can still check the job boards from my phone during lunch. So, if I can search for an upgrade while at my current job, why not do it from the water? GO FISH!

THE PLAN: So, with no excuses in front of me, I planned a day on the water, a Monday. I'm notorious for over-planning, over-rigging, and over-planning again. I also have tackle in a number of different places. See, sometimes I fish a little before I go in to work, so I have a tackle tray dedicated to stay in the truck. Then sometimes I use live bait while I fish from the beach, and I have a tackle tray for that. Then of course I have a boatload of tackle that I use when I fish from the kayak. There is absolutely no way I could fit all of that on my boat, so I did have to spend a little time getting tackle together. I did rig 3 rods with my favorite lures and tossed a few things in my milk rate.

THE DESTINATION: The destination: Fort DeSoto. I've spent more time here than at any other location in Florida, but there are still areas I haven't covered yet. Here is a map of it, showing the general area where I'd be fishing 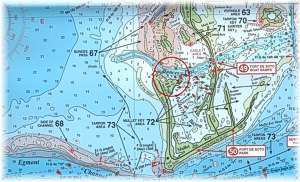 As you can see, it ranges from shallow to real shallow. If you ever fall out of your boat while at Fort D, don't panic … just stand up. That chart really doesn't do this location justice, so how about a post card view: 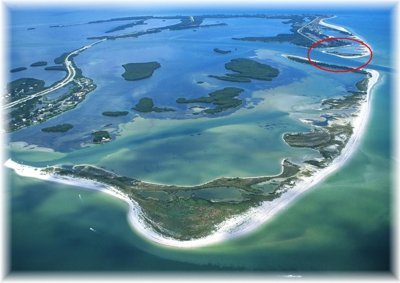 Here's a better look, thanks to Google Earth. 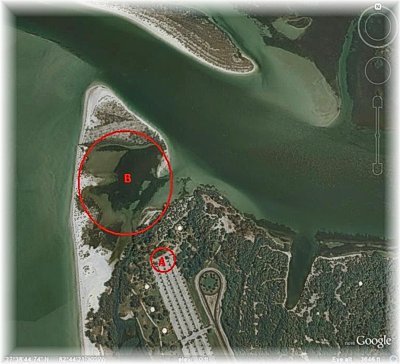 The glory of this area is that you can almost always find a break from the wind, or the sun, or your fellow man. It's also a very fishy area with easy access to the beach, the flats, the mangrove shorelines, you name it.

This is a magical time of year in west central Florida. We have a tree called a "jacaranda" with breathtaking purple blooms. Pretty, yes. But when they bloom it also signals the beginning of the breeding season for snook along the beaches. So, I was hoping to paddle the short distance across Bunces Pass and try my luck at some beach snook from the kayak.

THE WEATHER REPORT: No rain in sight. But, the wind would certainly be an issue. The forecast called for 15-20 mph winds, so I'd be seeking shelter from that. The temperature would reach the mid 80's.

DECISIONS, DECISIONS: I decided to take my smallest boat, the ten footer. I would be by myself, so I'd be wise to take the lightest boat. Still, I used a cart to get it to the launch, which was only about 60 yards from where I parked. I took 3 rods, rigged with a jerk bait, a jig, and a suspending hard bait. I kept the gear minimal, less to load, less to unload.

IT'S TOO LATE BABY: Now, it's too late. By that, I mean I got to the destination at about the ideal time to be going home. I got on the water around 10:00 am. Once the sun gets high it makes sight casting harder, but the water starts to heat up, reducing the oxygen content, and fish simply don't feed as actively. Still, the "cove" where I launched was very protected, so I had a pretty easy paddle making my way to the back side of the beach. Fish don't always stick to the accepted patterns of summer angling, so we shouldn't either. I've caught snook in the surf in the heat of the day with kids splashing all around. You just never know when lady luck will smile upon you. 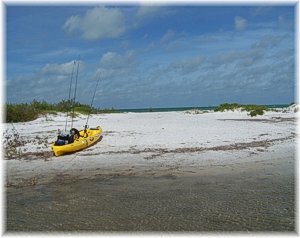 Fishing for snook on the beach is normally best when you can sight cast for them. They'll normally be found in a foot of water or less. However, that would be impossible today, thanks to the wind. 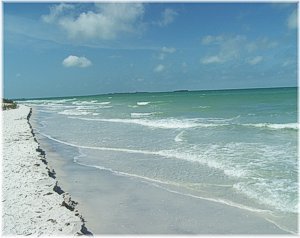 I walked the beach a while, made a few half-hearted casts anyway. I watched for birds and bait, didn't see either. As is often the case, once I don't catch anything on my initial casts, my adventure turns toward exploring and taking pictures. Since I'd never paddled this area, I took advantage of the circumstances and did some recon. The area I was in would actually be a very good spot early in the morning. And, after looking at the Google map, if the beach area on the west is too windy (which it was), I could have worked the area of beach facing the north (at Bunces Pass) and may have found some protection from the wind. That would also be a good spot to search for pompano.

So, after some picture taking I opted to beach the kayak, walk and wade a bit. But most important, I took the opportunity to RELAX. 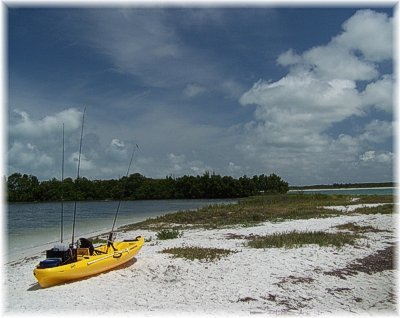 There were a couple guys wade fishing in an adjacent cove, so I enjoyed my shore lunch while I watched them fish. They were using live bait, but weren't having any better luck than I was using lures. And they were very serious about this whole fishing thing - rarely speaking to each other - watching their rod tips closely. I was more interested in my sandwich. However, if one of them hooked up I may have changed my stance.

PEACE OF MIND: There is no doubt that I'm a paddler that fishes, not an angler with a kayak. I love the process of fishing, but it doesn't take a lot to distract me. On this day, I got several distractions that were long overdue. I took a couple hundred pictures (and doesn't that polarizing filter make those clouds look nice?). I got some exercise as I did my exploring, and that can never hurt. I was also able to check my e-mail and the job boards from my phone during lunch, and that gave me the "peace of mind" I needed to round out the day.

Everyone is busy, traveling at the speed of life. But in order to stay on top of your game, you do have to recharge your batteries. If you're reading this, then you're like me, and that recharge can only take place in the presence of water. So …

Well, it's over. Football season I mean. It's a sad thing for sure. So now, what will I do with my free…