Well, it's over. Football season I mean. It's a sad thing for sure. So now, what will I do with my free Sundays? Damn right, time to create my self some good luck.

As I reported last month, the long span of cold weather has taken its toll on Florida. Vast fish kills have been documented. The snook and tarpon populations have taken such a hit that their closed seasons have been extended. Granted, for the poachers they could care less about the extension, and there aren't enough law enforcement officials as it is. But, it's a step in the right direction if we want to protect our resources.

"Luck" is often described as that moment where preparation and opportunity meet. Wintertime fishing for me has been pretty unlucky. It may be a nice day with good conditions for fishing, but other things demanded my time. Or, I'd have the free time but it would be windy, cold, or raining. Opportunity was certainly lacking.

Plus, even though my fishing gear is much better organized than before, it would still take me a while to gather up all the pieces and get the truck loaded. So, I could make some strides toward being better prepared to go, given the opportunity.

So, the plan was set in motion. Get the proper gear ready, and then jump at the opportunity when it presents itself.

OPPORTUNITY / LOCATION: As of this writing, the local water temp is in the mid 50's. Spotted sea trout can handle that, as can grouper, and cobia. Sheepshead tolerate these temps as well, but don't take well to artificials. Redfish and snook either go dormant or go belly up. Fish still need to eat, but the main thing on their mind is staying warm. If they can find warmth, they'll eat if they can.

So, that left me with some options:

PREPARATION / WHERE: There are some magical places right now that consistently contain warmer water. Power plants. Yep, the warm water outflow of power plants can be very productive in times like these. Baitfish, predatory fish, and even manatees seek comfort in these areas. If there is any sort of opportune location to be found this time of year, this is it. There is a power plant about 15 minutes from my front door. I've never fished the outflow there, but I've heard stories. Magnificent stories about the huge numbers of fish that congregate there in the winter. I've also heard stories about hapless anglers that have ventured too close to the outflow, ended up in the "no entry zone" and took home a citation instead of a fish story. So, I did a little internet recon, found maps of the boundaries, and decided this is definitely the place to go.

PREPARATION / WHAT: Luckily my favorite fish to target can be found in large numbers at these power plant outflows. That would be the Jack Crevale. Not a fish suitable for table fare, but pound for pound they put up more fight than any other fish I've ever tangled with. Below are some pictures of jacks basking in the warm water at Homosassa Springs State Park a few winters ago. State Park = no fishing allowed. 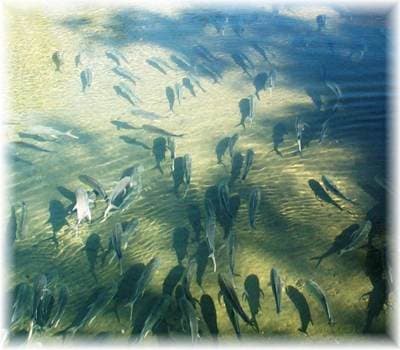 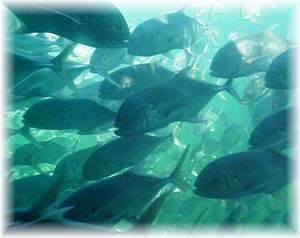 These fish are very hardy, and can certainly tolerate catch and release better than other species right now. They are bad, bad boys and can test the limits of anglers and tackle alike.

PREPARATION / HOW: As far as tackle goes, it's a matter of go big or stay home. These fish can reach over 20 pounds, and have a very rough mouth. So, 40lb leader is necessary, doesn't need to be fluorocarbon though. I have one reel that is loaded with 20lb braid, so that will be my main rig. Concerning lures, surprise surprise, I'll be throwing top water plugs, with the barbs on the hooks pinched down. If I do find fish, I'll probably lose a few lures, so I'll probably use some "seasoned" lures before I break open new ones. Who am I kidding - I can't wait to throw those brand new lures.

Chances are good that it will still be cold, so I'll need to be prepared. Sweat pants under breathable waders, toasty socks, a wicking t-shirt with some other layers on top of that. I'll top off the top with a windbreaker. Most heat in the body is lost through your head, so I'll have that bundled up too. If it's a sunny day and the wind isn't howling, it could possibly warm up in the afternoon, so I may need to shed some layers as the day progresses. To dream the improbable dream …

In my most recent outings I've been taking my 10' kayak. I love everything about it. Jerry be nimble, Jerry be quick. However, for this trip I'll be taking the 14' boat. Why? Cows … Sea Cows … MANATEES. They too are drawn to the warm water. They lay on each other to conserve heat and end up looking like potatoes in a pot. Docile and friendly to a fault, these gentle giants will allow you to paddle very close to them. Problem is, if one spooks, they all spook. They're real cute and cuddly until they get spooked. Then all hell can break loose. Imagine an underwater stampede. Pagan sea cows. They can easily flip a paddle craft. So, just like Chief Brody mentioned in Jaws, a bigger boat is sometimes better. Pagan sea cows indeed.

PREPARATION / WHEN:
I can't control the weather. If I could, I'd probably own Florida by now. But, I can certainly stay on top of the weather, wind, and tides and hopefully make the best of the situation. A word to the wise for any of you folks traveling to Florida. Trust the NOAA weather forecasts and even the Weather Channel above local news. It's my firm belief now that the Chamber of Commerce owns the local weather forecasters, since that always seems to be a prettier picture.

EXECUTING THE PLAN:
It finally looked as if the weather would give me a much needed break. The day before (Saturday), I did a little recon out by the power plant. Here is how it looked then. Nice and flat … perfect paddling conditions. 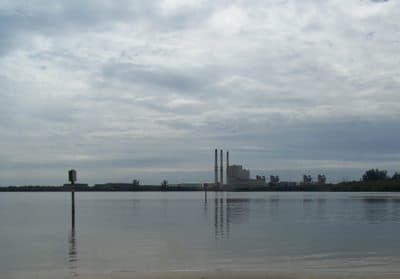 However, when I showed up on Sunday morning it was a different story. The wind had definitely picked up, which would make for a less than desirable paddle over to the power plant. But that didn't slow down some fellow anglers. 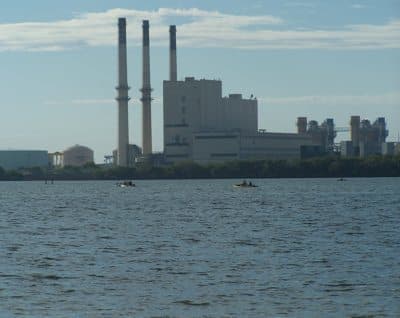 There was also something else that was different than my recon trip - the smell. Like I mentioned earlier, due to the recent cold weather, there have been substantial fish kills. So what happens when you get a warm day, a little breeze, and some ripe fish? Your guess is correct. As a result, I didn't even launch the boat. Sure, I could have managed the stench if the fish had been biting. But you have to consider how you feel after breathing that junk for several hours. It wasn't worth it. So, I left. But, I still fished a bit. I simply had to drive another mile and fish at a different location. I opted to make a few casts from shore, soak in some sun, and try my luck.

CATCH OF THE DAY: No fish were harmed in the writing of this article. The fish that survived the cold weather didn't receive any extra pressure from me. The catch of the day was me simply catching the fever of fishing again. So, after a few dozen casts I called it a day. I scored this as a successful trip and am looking forward to going again, and finally getting the kayak wet for the first time in 2010.

A GOOD DAY FOR THE BLUES: No, I'm not talking about the song by Storyville (though you should check it out). By stopping my fishing excursion early, it gave us the opportunity to go to a local blues festival a little earlier than we had planned. Hot guitars kept the rain away, and we stayed until the last Stratocaster had been placed in its case. Score this day in the WIN column.

See you out on the water … or playin' the blues …