After a long day of portaging through a bug-infested bogs and paddling across windy lakes, there's no other way to wind down then to munch on some original GORP mix while sipping elegantly on a "Bush Martini." Why not? You can't choose a snack more suited to camping then GORP, and the martini itself resulted from a gold miner wandering out of the wilderness and into a saloon in Martinez, California (1862). He wanted an empty whiskey bottle filled with something worth the weight of his small pouch of gold, and thought just plain whiskey wouldn't cut it. So the bartender filled it with a concoction of lesser-known spirits hidden behind the bar, plopped an olive in it, and labeled the drink after the town. 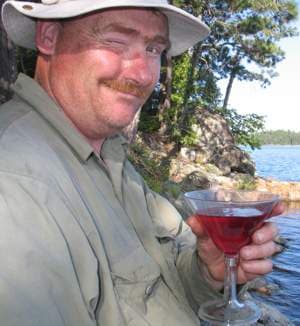 There are as many Bush Martini recipes out there as there are reasons for dragging yourself through the wilderness in the first place. Most outdoor enthusiasts are far too complex for the common gin and vermouth mix.

Beginners usually go for the simple (but effective) pouring of equal parts gin and cherry flavored Kool-Aid in an enamel coffee cup - shaken, not stirred - then transferred to a Nalgene water bottle. But this presentation is less than civilized.

The ultimate, however, is what's called the "Blue Sky"-- an ounce of vodka, a quarter ounce of sweet vermouth, a quarter ounce of Blue Curacao, and, to finish, garnished with three plump blueberries squired on a dried up pine needle. Now that's the perfect Bush Martini. GORP Eating Etiquette No matter how you make your GORP, it's crucial that the proper eating etiquette is followed. No "high grading" allowed. No one picks and chooses only the bits and pieces they like in the GORP bag. They must blindly grab a handful of the entire mixture and munch away.

First ever trail snack The Greek army was the first to use high-energy trip snacks. In 150 B.C. supply officer, Philon of Byzantium, made up pellets mixed with sesame honey (for protein and carbohydrate), opium poppy (to control hunger pains), and a medicinal root called squill (acting as a stimulant). It probably tasted horrible but did the trick.

Kevin Callan is the author of eight books including 'The Happy Camper: An Essential Guide to Life Outdoors' and "The New Trailside Cookbook." He is a recipient of the National Magazine Award and a regularly featured speaker at North America's largest paddling events. 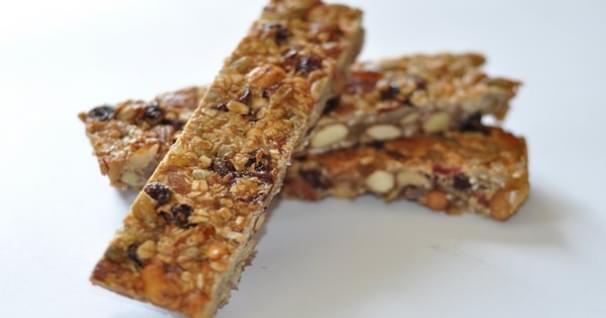 Granola Bars: the good, the bad and the ugly

Many outdoors enthusiasts, students and busy office workers have turned to granola bars in their quest…

Nothing is more appealing than a day spent on the water, either in a canoe or a kayak. And along with…