"All day I've faced a barren waste without the taste of water, cool water.Old Dan and I with throats burned dry and souls that cry for water- Cool, clear, water."- From the classic country-western song "Cool Water" by Bob Nolan

It's a required scene in nearly every Hollywood western - a parched and ragged form crawling along the desert, past a half-buried sun-bleached skull, hopelessly seeking a drop of water to moisten his cracked, flaking lips. Dying of thirst!

Most water related activities probably don't even conjure images of being thirsty in the first place, even though the need is clearly there as well. At least with fresh water beneath our hulls, most inland paddlers have a quick, if not cautious, fix when the thirst meter starts to redline.

The perception of thirst as depicted in the movies is much more dramatic than the reality of becoming dehydrated in the real world - adventurous or complacent. In fact, most humans are already into the mild stages of water deprivation before they even know it.

What is "dehydration" anyway? Obviously it means being de-hydrated, without hydration; without water. Basically our body is dehydrated when more water has left the body than has entered it. It's important because sixty-seventy percent of the human body is composed of this liquid of life. Nearly every system in our body depends upon water - it's our principle chemical component. It's contained in our blood, digestive juices, urine, and perspiration as well as in our bones, lean muscles and fat. Some of the main functions of water in our body include:

Unlike camels, the human body doesn't hold large reserves of water. We need to make sure we keep our body's adequately supplied - in intracellular spaces, in blood vessels and even in the spaces between our cells.

• Men have a higher body water content than women

• Eating provides about one liter of water - the rest you must drink - and don't wait until you feel thirsty.

• Unlike a camel, humans do not store water

• In a survival situation, don't eat much if you don't have water

Mechanisms of Water Loss In his survival book, 98.6 - The Art of Keeping Your Ass Alive, survivor instructor, Cody Lundin explains that a person at rest needs about 6 cups of water daily while that same person can lose up to 16 cups (a gallon) in just one hour of heavy sweating!

Even the sedate couch potato loses water just sitting around - through breathing, perspiration, and urine/bowel functions. Add illnesses that cause vomiting and diarrhea and the water loss goes up. In general, the average rate of loss of water in humans depends upon many factors including metabolism, activity levels, the weather and even the food we eat. 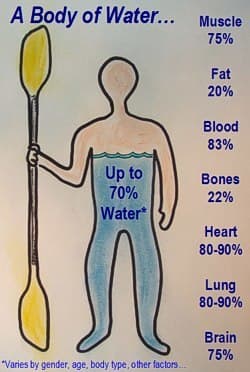 Some of the common causes of dehydration include:

Symptoms By the time you feel thirsty the dehydration process is already underway. While thirst is an indicator of water need, steps to re-hydrate should begin before thirst sets in. Symptoms vary from person to person, influenced by factors such as age, environment, physical condition, etc.

So what are the symptoms of dehydration? It manifests itself in three stages: 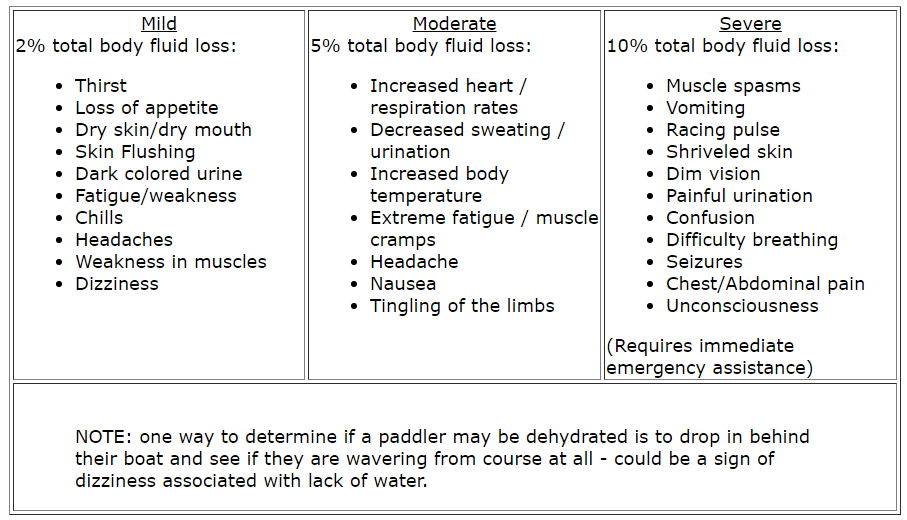 Children are especially vulnerable to dehydration. Some of the common symptoms that suggest kids need water are: dry or sticky mouth, few or no tears when crying, eyes appearing sunken, lack of urine for 12 hours (or small amounts of dark yellow urine), and dry or cool skin.

The best and most obvious way to prevent or treat dehydration is simply to drink plenty of water. How much depends on several factors but the general quantities most often recommended are at least six to eight, 8-ounce glasses of fluid each day. The Institute of Medicine recommends an adequate intake for men is to drink about 3 liters of total beverages daily - that's about 13-15 cups or nearly a gallon. Women need about 2.2 liters or 9-11 cups - almost 3/4 of a gallon. Shorts bouts of exercise may require up to an additional 2.5 cups of liquid.

Drinking water before and after an activity as well as several times each hour at intervals also helps keep you hydrated. If you are nauseous and can't keep large amounts of water down, try sipping liquid instead. Try to avoid caffeine (coffee, sodas, tea) as it is a diuretic and you don't need to be losing water through peeing!

Another situation that can lead to dehydration is activity at higher altitudes. For paddlers that may only mean that the opportunity may arise at a mountain lake or paddling across Lake Titicaca?

Eating fruit for its water is better than drinking fruit juices because they contain as many calories as sugar sweetened sodas. Fruit also has nutritional value and fiber content. Food can provide up to 20% of one's daily water requirement (but digesting protein rich foods requires more water than other types). 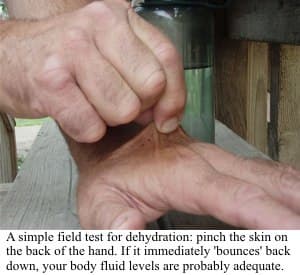 Sports drinks (such as popular Gatorade ) that contain minerals such as sodium and potassium and drinking them helps restore those lost minerals to regain and maintain an electrolytic balance in our system. Those levels can come out of balance during more strenuous activities. That being said, "mineral" waters may contain too much salt that can cause the body to retain so much fluids that it causes swelling. The human body does rid itself of excess sodium which, in turn, results in less fluid retention. Fluids containing no more than 30mg of sodium/100 ml of water are recommended.

If too much water is drunk, our blood can become diluted, our kidneys can't excrete enough. This results in the sodium in the blood to drop dangerously low - a term called hyponatremia. Most of the time eating some salty foods will be enough to replenish levels in the body.

A brimful of advice

The best and most basic treatment for dehydration is to simply drink water. Plain, ordinary water. Some survival experts have their own methods, including Cody Lundin who suggests "Four Factors for accelerated maximal hydration":

If you generally don't feel thirsty during the day and can urinate at least six cups of clear or light yellow urine, you are probably adequately hydrated.

As a paddler, for your own health and the health of others, make sure you carry plenty of water. Our boats offer ample space for several days under most conditions. Learn how to find water in emergency situations and make sure you are equipped with adequate and accessible water during your outing.

The bottom line on dehydration may have been best summed up by Mark Twain:

"Water, taken in moderation, cannot hurt anybody."
Be safe, have fun – and stay hydrated out there! 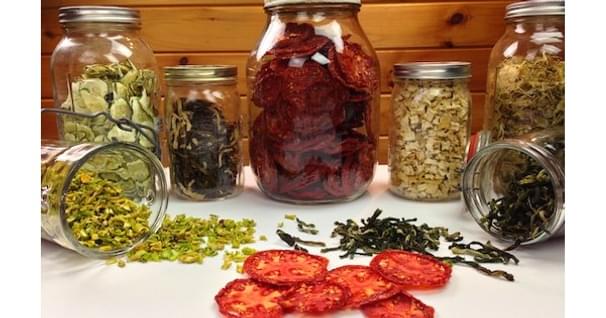 A World of Sandwiches

Don't worry: I don't intend to take you back to those horrific high school days, when you woke up so…

Delicious in salsa, sweet or savory sauces, fruit salads, smoothies, vinaigrettes or in cereals, the…