Priced right and built to last, AIRE's Tomcat Solo is a fun, stable kayak for paddlers just exploring the whitewater world. With vinyl bladders and a rugged PVC outer shell, this durable inflatable will continue to be a reliable boat as your skills improve. It comes standard with a comfortable inflatable seat, bow and stern dodgers, a mesh drain system, improved shape, flip handles, welded seams and bow/stern d-rings.

Read and submit reviews for the Tomcat Solo.

Read reviews for the Tomcat Solo by Tributary as submitted by your fellow paddlers. All of the reviews are created and written by paddlers like you, so be sure to submit your own review and be part of the community!

After retiring from hard…

After retiring from hard shell kayaks I can't say enough about the convienence and fun of a well made IK. The Tomcat is easy to set up, comfortable , agile and has good lash down points. My previous IK had two air valve systems which made borrowing a pump imposible. The Aire has universal valves. The best feature about IK's is they pack small (large duffle bag size) and you don't need a truck, or roof racks to portage. This boat is tough enough for Class III and can handle a week worth of camping gear if you pack light. fun!

Rented a couple of these…

Submitted by: Anave26 on 9/8/2014
Rented a couple of these several times. For what they are they are pretty nice boats and fun to paddle.

The Pros:
Only rented so I can't really speak to the longevity of the boats though when I asked the guy at the shop about it he said they swap out their boats about ever 3 years... For rental boats that see a lot of time on shallow waters that doesn't seem too bad. Can't really speak to how long they last after the shop sells them on the second hand market though.

Maneuverability: They turned well and handled the mild white water we used them on (Upper Verde river, AZ) maybe class II is places. A lot of tight channels on that section of the river and the boats handled it nicely.

Pretty comfortable to sit in. Though we were only in the kayak for about three hours my back and buttocks were happy enough with the ride. At least in the boats we had you did sit on the floor of the boat so your going to get a little wet.

Handles shallow water pretty well. I did get stuck on one sand bar, but that was entirely my fault I was too busy looking at the scenery to pay attention to where I was going. Other than that, I'm a fairly big guy, about 250, 6'6" and had no problem gliding over section of water that were as shallow as about 8 inches. Based on that and the maneuverability these should be pretty good 'creak boats' for the price.

Speaking of price, these are pretty good boats for the money going to be tough to find a better IF Kayak for the same price point.

The negatives:
Depending on what you want to use this boat for these negatives could be significant on not matter much at all, but here they are.

Wind: Ugg, even for an IF kayak these things do not handle wind well. If you are looking to get in shape by way of paddling, then get one of these, turn it into the wind and go to town. After 3 hours of hard paddling you should still be close enough to the launch point to here the lunch call...

Tracking: All IF Kayaks have sub par tracking by comparison to their hard shell or skin on frame counter parts, that is a fact of life however, while I found these boats to be a lot of fun on the narrow, shallow river we were on I would not want to paddle this thing across a lake, even on a calm day. Tracking is poor, even for an IF kayak. (It was amusing watching a few member of our group turn circles for the first 5 or 10 minutes of the trip though...)

It isn't the stiffest IF kayak I have ever paddled. That didn't really both me on the mellow river we were on but I'm not sure how I would feel about this boat on a class III or IV... Could taco on you in big water. To be fare this was in no way an issue for our trip though.

In all this was a nice boat for working class I, II, or III rivers and creaks where your not going to encounter a lot of wind. If you are okay with the limitations and are comfortable with the size of the boat from a cargo stand point (again 6 1/2 feet tall and I was quite comfortable in the boat with a day trip cargo load) you are going to have a difficult time finding a better boat for the money. It is fun to paddle and very responsive. Arie did a nice job with this one.

I have used this model kayak…

Submitted by: guest-paddler on 6/8/2011
I have used this model kayak on several guided white water trips over the years and always thought they were well built and handled well. I recently bought one for surf kayaking and was surprised at how well it handled in the 4 to 6 foot waves at the beach. It stores easily and is a great addition to my beach camping trips.
A very well designed kayak for the money.
1

We rented two of these things…

Submitted by: paddler232776 on 7/25/2008
We rented two of these things so family could join us on a flatwater/fastwater trip. Think "floating refrigerator." They are water pigs. Even several strong men familiar with kayaking found them truly awful. A conventional two-seater is like a sports car compared to these tubs.
5

The Tomcat is a very…

Submitted by: paddler230558 on 5/17/2004
The Tomcat is a very versatile, fun boat and is an excellent. value. It's a little heavier than Aire's higher end models, but still weighs under 50 pounds with paddles, PFDs, and a pump... so it is easily packable. It's rigid and maneuverable enough for whitewater, and comfortable and roomy enough for long trips- We spent a week on the Teslin and Yukon Rivers and we fit all of our gear plus a big-ass cooler (this is the Tandem model). This spring, I added a swivel chair mounted on some 1x6's that allows me to ride higher while fishing. It's a bit ghetto but it is very handy. Rarely have I been so impressed with something that I've invested in.
4

Submitted by: paddler230546 on 5/3/2004
I just bought 2 Aire tomcats; solo and tandem. What a deal paid way under retail; $375 and $410 respectively (delivered). A very, very nice boat for this kind of money. Way better than anyting on the market. They are both very reminnessent of Aire's caracals in all repsects except warranty. Blows up very stiff, and paddles true. Haven't tried the tandem yet, only solo. Not quite as good as my Lynx but I could buy two tomcats with money left over round-trip gas. Bails nicely and tracks well, only alittle heavier than the lynx. The only draw-back seems to be the valve system; you need that special adaptor to blow the things up. I hope you can order extras in case one is lost. Luckily I have 2.
4

I just purchased this boat…

Submitted by: paddler230385 on 10/14/2003
I just purchased this boat last week and i can tell you that this is a exceptional boat for the money. The kayak blows up pretty stiff and the self bailing air floor removes the water quickly. The boat is not tippy like my previous kayak: the sevylor pro and the innova safari. The downside of this boat is that it is alittle heavy (35 lbs), the backrest not very supportive (recommend a aire cheetah chair for $60), and the bow is alittle short (making for alittle more water splashing in the boat). However, all in all, i still think this is the best inexpensive inflatable kayak on the market for under $500. I paid $405 for mine. Don't forget your lifevest...
Tomcat Solo
by Tributary
Submit Your Review
Learn More 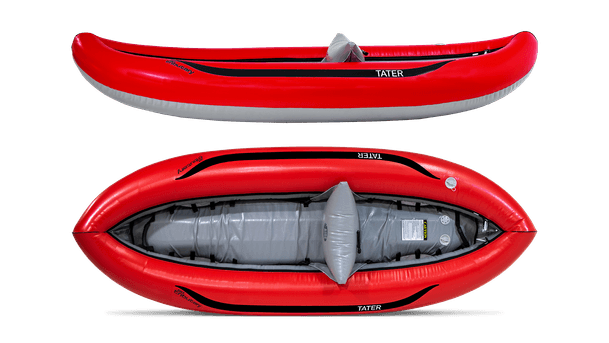 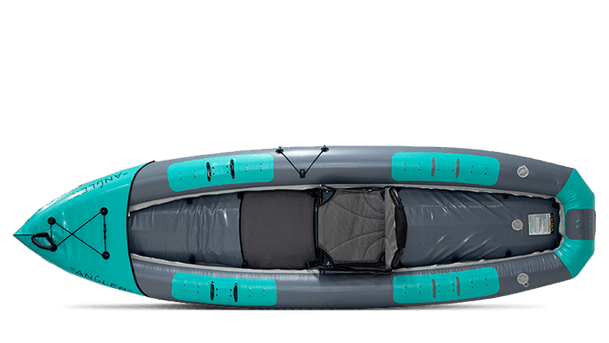 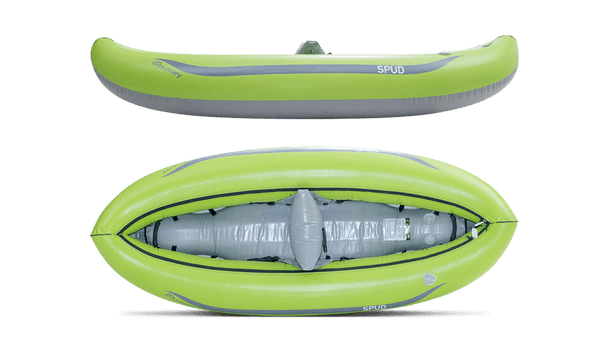 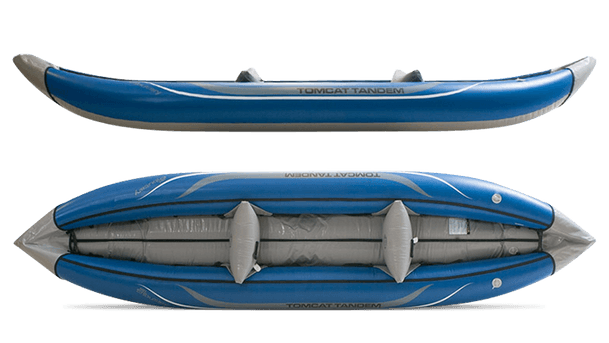