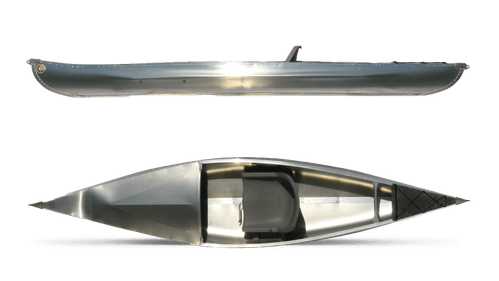 A recreational kayak that lasts! Combining both lightweight maneuverability and durable design into the world's first aluminum kayak - Osagian's superior craftsmanship and attention to detail comes through with an all new design. This kayak truly is a work of art for the next generation of Osagian paddlers! This is the standard model which includes side sponsons and elastic straps.

Read and submit reviews for the Osagian Kayak.

Read reviews for the Osagian Kayak by Osagian Canoes as submitted by your fellow paddlers. All of the reviews are created and written by paddlers like you, so be sure to submit your own review and be part of the community!

I have one without the top…

I have one without the top and have had it for 6 years. Ive not used it as much as i'd like too, but it paddles easily, moves fast, straight, and is aluminum tough. As stable as any kayak and holds more pounds than most (Im over 200 lbs). I saw the seat mentioned. I replaced the seat with one that is just the same except with padding. Not hard to do if you are mechanically inclined but not super easy either. Wont matter for most people but I like some padding. I like the kayak and its a great deal for the price. Would buy again.

I highly recommend this…

I highly recommend this kayak. Weighs under 50 lbs, and all aluminum makes it very strong and should last for a lifetime. It paddles fast and tracks extremely well. The plastic seat could use some padding to make it more comfortable but I think I have an older model so it might be different now. In some rougher sections of river I took some water over the bow but so did everyone else in my group, it was easier for me to dump out the side than my friends who had to remove their plugs and stand up their kayaks on end to drain.

It is great to throw in the…

It is great to throw in the back of truck to fish ponds and small lakes. Tracks real well paddles nice and you have something that a little different. I love the durability of aluminum store inside outside no worries just load up and go