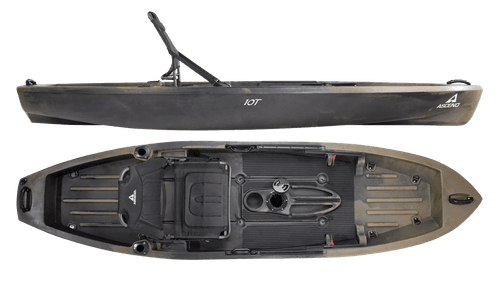 Read and submit reviews for the Ascend 10T.

Where to Buy the Ascend 10T

Read reviews for the Ascend 10T by Ascend as submitted by your fellow paddlers. All of the reviews are created and written by paddlers like you, so be sure to submit your own review and be part of the community!

Was super excited for my…

Was super excited for my kayak. Like a lot of the reviews. The weight is misleading. My fiancé is 160 pounds and those scupper holes were taking in water. Hard to move around without tipping over. Very unstable, can’t relax, and any small movements, you’re going over. My fiancé 250lb sit pelican for $300 feels way better on the water.

I hope I can take this back, because it was a lot not to enjoy.

After just two outings I…

After just two outings I noticed the Weathertight deck storage plate for my Ascend T10 kayak was cracked in multiple places. This part is essential in keeping my phone, key fob and other essentials dry. I have been dealing with this for over a week and spent several hours attempting to resolve with Ascend. Their latest response is that I need to take it to the nearest dealer which is over an hour from my home (one way). It is hard for me to justify spending another half day and 125 miles driving to replace a flimsy plastic part that can't cost Ascend more than few dollars. Perhaps they should have made a better part in the first place. Poor customer service.

I only gave this Kayak 1…

I only gave this Kayak 1 star because 0 stars was not an option. 325 lbs is very, very misleading. At 250 lbs and no gear it held water non stop. Very displeased, do not buy this kayak! Believe me!

Submitted by: paddler871880 on 9/9/2020
I bought the 2019 model from Bass Pro Shops here in 2020. For price the boat comes decently equipped. The seat does not attach to the boat, it must be securely tied down. If you tip (you will), that seat sinks like lead. Second beef, I’m 5’10 and weight 245 pounds. Total weight capacity is listed at 325 lbs. I figured I’d be good go. Nope, immediately took on water and VERY unstable. Had buddy who is 5’8 185 try it and he had exact same issues. Zero stability and poor tracking. Very disappointed.
2

The first issue I have with…

Submitted by: paddler865461 on 8/31/2020
The first issue I have with this kayak is that the weight capacity is misleading and false. As another reviewer posted it is not for big guys. The weight capacity should be determined by the weight the kayak can take while on the with out scupper plugs before it just turns into a piece of plastic taking on water. For us big guys the weight capacity and price range is a what we look at. The price may vary but honest descriptions and specifications are essential in a our trust in a brand and quality product. In this case I was looking to try out kayak fishing and came across this kayak and I was definitely impressed by the railes, folding seat, floor padding, rod holders and ample space for a stay dry bag and yak box. But the kicker was the weight capacity. I thought even if it’s rated up to 325 lbs. I weight 240 plus tackle/ fishing gear, so I thought there’s no way I’ll be close to the limit. The first time I went out fishing, I put no scupper plugs in thinking I’ll try it and adjust as I go. If any water comes over it’ll just have some where to drain. As I paddled across the lake, water keeper coming in from scupper plugs and was taking on water. 10 mins in I was on the shore trying to flip over my kayak to drain about maybe a gallon of water sitting at the back of the kayak. So I got it drained and got all scupper plugs in as far could go and off I went. I needed up just anchored somewhere off the shore. Not what I wanted to do and go paddle around my to hit different spots. The kayak is slow and unstable. Definitely not for a lake with moving water or any kind of small waves. It’s not like other kayaks that have a higher bow and stern, it is flat across the top. Small waves do come over often. It is a cheap kayak just for being a way to be on the water. Now it’s just me, two rods and a small plastic bait/ tackle box bc I’m not risking adding More weight to the kayak. So no use for kayak rails, front or back area for storage for me. 2 stars because it does keep you on the water and has some good accessories if you can use them. The weight capacity was the biggest turn off, it the kayak would have said weight limit at 275 or below 300 I would have not been interested in this kayak. I should have known seeing Jon B purchase this kayak add accessories and never made another video or mentioned it again lol. Excuse my rant, Thanks just trying to be as honest so other don’t make this mistake of a purchase if they are in my weight range.
3

Submitted by: 700feetabove on 7/26/2020
The Ascend 10T fishing kayak looks to be a great fishing kayak. I've paddled is multiple times. Is pretty stable and have a comfortable seat and seating position. I fish mostly saltwater marshes and harbors. I find that it dosen't track very well and moves through the water like a brick. Over all the kayak is in my opinion mediocre at best.
2

After purchase I couldn’t…

Submitted by: paddler770663 on 5/4/2020
After purchase I couldn’t wait to get this thing wet. I have a sit in, and tried out a friends sit on top and loved it. I’m 5’10” and 260lbs. This boat is not for big guys. Up to 175lbs your good (maybe). As soon as I got on the boat 4 of the rear plugs popped out and I started taking on water. Went to shore drained it out and pressed in the plugs as tight as I could. No more water rushing in. I took on some water from the front and there was no way to drain the water with out going to shore. I been on sit on tops before and the water is supposed to drain through the holes. This one didn’t, as soon as I pulled a plug to drain, water rushed in. My wife tried it out she’s at about 130lbs. She wouldn’t have been able to take out the rear plugs with out taking on water.
5

Sit on.Very stable,racks good.Have used it in ocean and it does great. It's made well not the cheapy feel plastic. Can carry a good bit of stuff for your outings.

the seat will rust / corrode…

the seat will rust / corrode within the year, beware, replacement is about $100 for another one that will rust out.

This review was written…

This review was written after my second trip on my Ascend 10T kayak; I will update after I have made a few more trips with it. I purchased the kayak because the large open bow gives my dog enough room to move around comfortably, and it is stable enough that he can do so with less risk of falling in the drink.

On the first trip out, I went without my dog on a lake in a state park. While he has kayaked with me before, I wanted to get a feel for the Ascend before adding the extra risk (and joy!) of 50 pounds of happy dog moving around. There was little wind, and the Ascend tracked pretty well on the lake. I did not have any extra weight in the bow, and I have heard that helps it track a little better. After watching videos of people standing on the 10T, I tried it myself and was shocked to learn that I could use it like a paddle board on my first trip out! I was even able to launch it standing up! This kayak is incredibly stable.

The 50 pound bundle of love joined me on the second trip out on the Ascend. He settled quickly into the bow despite there not being much cushion there for him yet. He stood, sat, and walked around. I never once felt like the Ascend was going to tip over even with all of his weight on one side. It was a windy day on a different lake, and the Ascend was a bit of work to paddle and keep straight with the wind, but not enough to take any of the enjoyment away.

Moving this kayak around. It weighs 66-67 pounds as delivered. I got a stand-on-top kayak cart, and it is easy to move around. The most challenging part is getting the kayak cart through the scupper holes. Handling 66 pounds and trying to maneuver a two-wheeled cart is cumbersome, but not impossible. I'm 5'1" and weigh about 140#, and I have been able to load and unload with little more effort than loading my older 36# one. Getting this kayak did definitely inspired me to USE gravity to my advantage rather than struggling to work against it.

Overall, I am very pleased with this kayak and so is my dog! 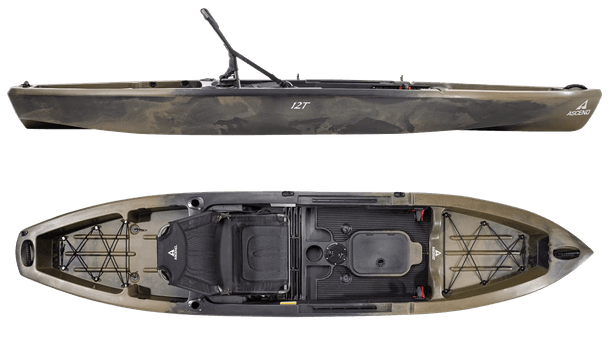 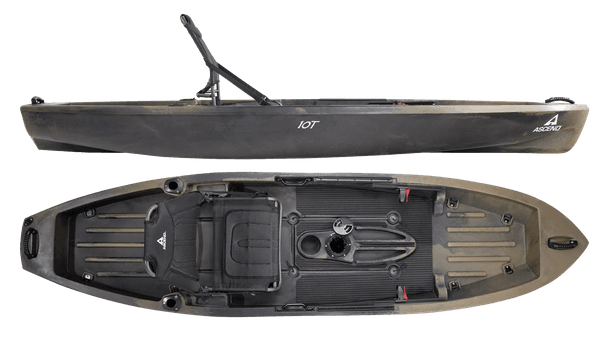 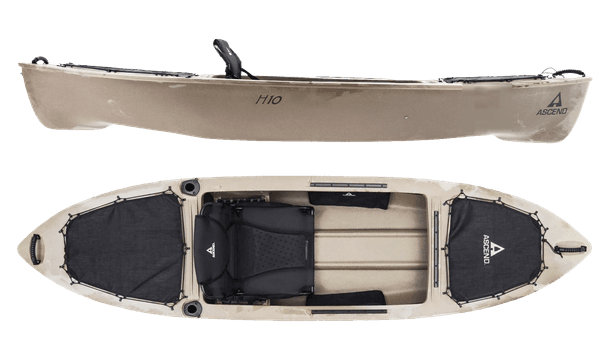