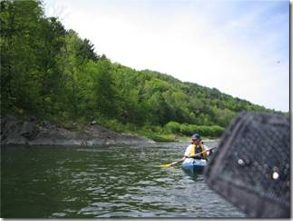 After scouting a section of White River in Vermont, about an hours drive from our New Hampshire home, we decided it'd be perfect for our first kayak-river trek. We had been watching the weather and decided the next day, May 19th, would be ideal; low 70s, sunny, no chance of showers.

We set out early that Wednesday morning with two vehicles as the set in and end point were about 15 miles apart. We lost each other on the highway due to heavy traffic and an unclear exit decision. (That won't happen again.) But since we had been to both spots the day before we knew where to meet, although that set us back about 45 minutes. I parked my truck in Hartford's City Park, got into his Audi and we headed up to Sharon, VT to begin our first river adventure.

Entry point is North of Sharon at a small town river parking area called Chelsea Park. We had to carry the kayaks and gear about 50 yards to the edge of White River. So far no bugs, sun was out and we were ready to go.

White River is fairly shallow although rocky with some deep smooth areas with MANY small rapids and ledges along the way. It is rated between Class 1 and 3 according to the Appalachion Canoe and Kayak NH/VT guide.

The river flows in a mostly quiet, scenic rural area along Vermont Rte 14, although many bridges cross over it including Hwy/Rtse 89 and 91.

Within the first 3 miles I took my first kayak dump after charging over what looked to be a small rapid area. I completely capsized, lost some gear, got some bumps and bruises, lost my paddle, but my husband, Jim, rescued me and got my kayak to shore. It happened so quickly that I still don't understand how it happened. Anyways, after my husband calmed me down he ran about a half mile along the shore to rescue my paddle. He did get it, but I did lose the skirt and a few small items. My feet had gotten entangled in the skirt which pulled me under a few more times before my husband reached me which scared me more than the capsizing. The most remarkable part of my first spill, and the memory of being underwater stuck briefly between my kayak and a big rock, was how clear my mind became. First I was told I was not going to die so calm down, and then to go up for air etc., etc. Fortunately also, the water was not too cold as my biggest fear was hypothermia. 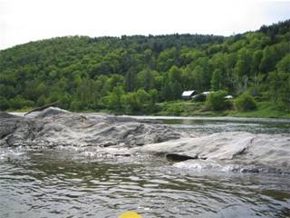 After about 45 minutes of drying off, taking stock etc., we headed back onto White River. I was pretty nervous and every little rapid began to look like Niagara Falls. Jim became better at scouting ahead to find the easier (safer) side of a rapid/ledge to paddle over or if it looked to ominous we ported the kayaks or pulled them from the shore ( we had tied ropes onto the bow handles at the beginning of the trip- That was probably the smartest prep we made that day!)

However, we soon came upon another rough spot. Jim yelled at me to go to the left side of the river, but I had gotten caught in a strong current that I was unable to paddle out of. I hit a rock and was turned backwards and was quickly heading for a big rapid. I was terrified. I hit another rock and managed to grab it and held onto it for dear life. I was about a foot from going over the rapid backwards and knew that I would end up capsizing again as this was bigger and faster than the one that got me earlier. Jim was on the other side of the river. He got out of his kayak and walked across the rocks. I thought for sure he would get knocked over or fall and break an ankle, but somehow he reached me and was able to push me into the rapid at an angle that was manageable.

I was now beginning to 'read' the river, seeing the current, looking for the "V" over a rapid area and the rest of the trip was fun.

There were several small sand bar-islands which made for good break areas after that.

We originally figured it would take 4-5 hours from beginning to end, but because of the multiple mishaps, one being our lack of experience, our first river trek took almost 8 hours.

It was definitely a worthwhile adventure, but one that we probably won't take again for awhile. We are both in our fifties and were pretty lame for a few days. We were also very fortunate to have come away with only bruises.

On hindsight, I look at it as very symbolic of our marriage-one never knows what is around the next bend

White River follows VT Rte 14West off of Hwy 89 or Rte 4 outside of White River Junction, VT where it meets the Connecticut River.

We used the Appalachian Kayak/Canoe NH/VT River guide, which we brought with us and read during our breaks to see what might be ahead of us.