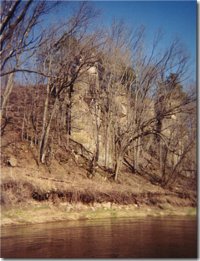 Carl and I were anxious to get out on the first paddling trip of the year. It's been a very long, cold winter, and it was time to get out. It was a beautiful day with a sunny sky and highs in the 60's. The river was flowing high, fast, and cold. High is a relative term though, when speaking of the Volga River. It is normally a very small river, and "high" means flowing about 4 or 5 feet deep according to the somewhat unofficial measurement of dipping the paddle blade down to the bottom occasionally. Although we brought fishing gear along (as the Volga is supposed to contain a good population of "small" smallmouth bass), we never even made a cast- Just enjoyed the scenery and wildlife. Fishing would have been tough, as the river was high, and fish-holding structure would have been tough to identify in these conditions.

We dropped Carl's car off in Littleport, just downstream from the bridge. There is a street there on river left near a row of abandoned houses. They are abandoned due to a series of floods, most recently in 1999. We then drove on to the Osborne nature center, where they have a display pen with some elk and buffalo. We put the canoe in near a little picnic spot at the end of a dead-end road, not really an official canoe access, but it worked O.K. 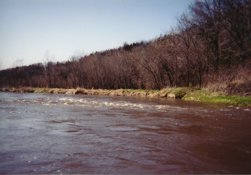 It wasn't much work canoeing the Volga. Little paddling had to be done, with the exception of some steering, and avoiding some boulders and downed trees. There were some little rapids areas that spun us around a few times and made things interesting, but luckily never tipped us. We saw quite a bit of wildlife, including a flock of about a dozen turkeys that flew across the river right in front of us. It is a heavily timbered area, and really gives you that "getting away" feeling. We only passed under one bridge (at Mederville) during the ~ 8 mile trip. Large limestone bluffs tower over you in several areas, and some interesting rock formations have been carved away by erosion. It would be interesting to make this trip again, when the water's a little lower, and try the fishing.

The exit point was an experience in itself, as it turned out to be a little steeper than I had anticipated. With the swiftly moving water, we missed our first spot, and Carl almost ran us into a downed log in the river, but we made it out about 20 yards downstream, and "lifted" the canoe up onto the bank. This trip took about 2 hours & 45 minutes. I would plan a much longer trip next time, as the water will be lower, and I'll be doing some fishing.

This is a beautiful area to paddle, but would be difficult during late summer if water conditions are low. During late summer, I would recommend the nearby Turkey River.

Osborne Nature Center is north of Strawberry point on Hwy 13. Littleport is on the map, but don't expect any provisions in this tiny town.