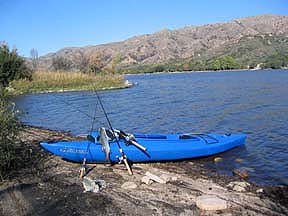 What a difference a year makes. If you wanted to camp at Silverwood Lake this time last year youd need a gas mask and a fire retardant tent. But the 2004 fall camping season has turned out to be ideal. Recent rains have brought color back to the charred hillsides of San Bernardino Mountains; trout plants have plugged most Southland Lakes; and the stripers are biting at lakes like Silverwood, Skinner and Castaic.

In fact, it was the striper photos from Lake Silverwood submitted by Greg Silks (one of the Wests top 30 anglers and Silverwood fishing guide) three weeks ago that got my blood pumping. The weather was a bit dicey at the time with heavy rainfall and generally snotty conditions, but it brought out the big boys for a week of striper fishing that saw plenty in the 20-pound range and one 36 pounder.

At my first opportunity I threw the kayak on top of the camper and headed to Silverwood. The rains had created mudslides along the charred hillsides surrounding Silverwood and for one day each week the campground was closed. But rangers and workers at the state recreation area were speedy in clearing a path for anglers and campers and I was assured by local officials the lake was open for business.

When I arrived at the lake the hills were bursting with fall colors. Yellows, reds and a carpet of green welcomed me to the campground, which is well designed with plenty of space and camper privacy.

That first night I was concerned about the full moon. Clouds had cleared and the white orb was burning at 97 percent, lighting up the campground all night and eliminating the need for a flashlight. I was worried the stripers would be eating all night by the light of the moon.

Dawn saw a thick layer of frost over everything. When I launched the kayak into the fog-covered waters of Silverwood there was a beautiful silence beautiful for paddling, terrible for stripers. No sign of fish chasing bait or breaking the surface, just quiet calm water.

I was armed with big Z-Plugs, AC Lures and Charlie Megabaits. Casting in to shore the large lures hit like bowling balls in the silence and created a false excitement for boaters just pulling into the Cleghorn Arm of the lake. They believed the sounds of my lures were active stripers.

As the sun burned off the fog a clear, bright calm lake emerged before me. A beautiful place, with green hills and fall colors rolling down the waters edge. But still no stripers. I knew that the great weather and full moon had sabotaged my fishing.

After a fine morning of paddling the lake I headed back to enjoy the campsite. It was an excellent day at Silverwood and the surrounding area is loaded with great hiking trails and mountain biking paths. Settling in at the campground for the weekend also gave me the opportunity to socialize with my fellow man, which is one of the prime benefits to camping.

The next morning I was forced to wait an extra hour to get on the lake due to the time change. At one point I considered changing over to trout gear, but resolved to give the stripers another shot.

I set up a trolling pattern that combined deepwater coverage with the coves and points. I had a Fenwick rod and Abu Garcia reel loaded with a Charlie Megabait in rainbow trout colors ready to cast to any breaking stripers. My first bite came in the middle of the lake on the troll. It was a smaller striper, 21/2 pounds, but promising. I released the fish unharmed, mostly because I was confused about the limit. I thought the limit was only two stripers, which is true throughout most of the state, but in the Southern DFG District and Colorado River District the limit is 10.

As I approached the end of Cleghorn I saw a striper boil on bait about 20 yards from shore. I blasted my Megabait to the spot and was hooked up immediately. This fish was better, charging back and forth, diving and finally coming to the boat in a huff. I threaded the 4-pound striper to my stringer and paddled on with new optimism.

Throughout the morning I kept my eye on the other anglers fishing from boats. In hindsight, Im sure the stealth qualities of the kayak allowed me into the striper zone with spooking this wary species. Three more stripers in the 4-pound range came to the boat while casting at boils or jumping fish and I continued to release them thinking I could only keep one more. I was hoping for something really big.

In the end I was satisfied with my journey to Silverwood. I didnt get into the really big stripers, but the season is just beginning. Im anxious to get back to that lake and Skinner this fall. Camping is just the ticket to enjoying these lakes in full.

Great campground, good marine with boat launch, but the swimming beach is the best place to launch a kayak.

Campground fees if you stay overnight. Day use fees are less than $10.

From Los Angeles take I-10 East to I-15 North to the Silverwood Lake exit (Highway 138 east) on the Cajon Pass a few miles before Hesperia. Take 138 east 12 miles to the lake.