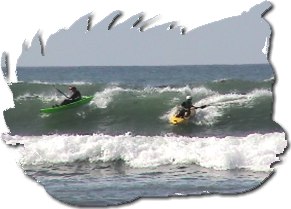 San Onofre Surf Beach is located south of San Clemente and North of Camp Pendleton Marine base, about an hour north of San Diego and at the far south end of Orange County.

This area was famous during the Nixon years as the Western White House. In fact Nixon had a role in getting this area turned into a California State Park, one of his better legacies. San Onofre is famous among kayak surfers and many web sites have links to the San Onofre Kayak Association and their info on surf maneuvers and surf etiquette

The surf beach is found at the end of a dirt road along the beach and adjacent to the San Onofre Nuclear Power Plant. It is known as Old Man’s Beach by locals. Kayak surfers are only allowed in a small area of the beach between a drainage ditch and the power plant property. There is a sign on the hill and from the waters you can see letters that say O K; if they appear to read K O then you are out of bounds and you need to paddle and surf further south and closer to the power plant.

The day we surfed San Onofre we camped at the San Mateo Campground located about 2.8 miles away as the crow flies. This is a nice campground with spots for RVs and tents and not as crowded as beach campgrounds. In the winter (late February) it was very uncrowded on a Friday night and easy to get a spot. Currently the San Onofre campground on the bluff is closed, it will reopen in the summer but reservations need to be made many months in advance. This February the water was a warm 60 degrees F.

The day we were at San O their was a pretty good south swell, unusual I think for Winter months, but more common in the Summer. The beach orientation looks like it gets the best waves with a south swell. The surf was extremely forgiving for surf kayaking, with the waves breaking a long, long way out and giving super long rides. The day we were there the biggest sets were 6’. The waves were spilling or mushy with most of them just with enough power to really surf but not breaking by dumping so it was very easy for experienced kayakers to get out through the break, and a nice place for beginners to learn to paddle out through the surf. This is probably the best place to get long rides in southern California. Our group surfed all morning for about five hours until everyone was too tired for more and the waves finally died down.

We met Mike Johnson a legend in surf kayak design and one of the fathers of waveskiing. We also met a few local waveskiers who were very territorial about their beach and were pretty obnoxious. Several in our group were beginners and could have done a better job about giving priority to more experienced folks on the waves, but these were the most obnoxious surfers I have encountered.

In the summer this beach is supposedly very crowded on weekends so either visit after labor day or come on a week day morning. Definitely worth a visit if you are in the area and not afraid of surfing in the shadow of a nuclear power plant. Southwind Kayaks in Irvine gives surf classes on the beach here, it looks like it would be a great way to get introduced to surf kayaking. This also looks like a good spot for launching sea kayaks to explore the coast line to the North. Unfortunately the coastline to the south is largely off limits for about 15 miles as part of the Marine Base.

A restroom near the beach. Camping at San Onofre Campground or San Mateo Campground nearby. Lots of motels and restaurants in San Clemente or Oceanside.

$5 dollar entrance fee. You need to follow the rules about where to surf in kayaks.

Take I-5 until just south of San Clemente, exit at San Onofre/Basilone Road Exit, follow signs to Surf Beach or Surfing Access, then follow the dirt road along the beach to the end, their is a $5 dollar admision, ask at the booth for directions to the kayak beach or "old Man's".