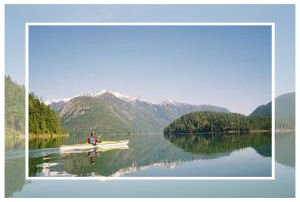 What little is written about Ross Lake in North Cascades National Park, invariably mentions how uncrowded and unvisited it is. The reason given is that its really difficult to get to. Except that its not. We took a 5-night kayaking trip on Ross Lake and the logistics were no worse than for any of our other kayaking expeditions. Yeah, you gotta take a ferry to a truck to speedboat, but its all lined up for you and its really easy.

The place to start organizing is Ross Lake Resort; they rent the kayaks and will explain the transit situation. For being the only game in town, Ross Lake Resort is a pretty good outfitter. The one weird thing about their inventory is that they dont rent wetsuits. Ross Lake stays around 40F all year, so if your kayak went over, youd want to have a wetsuit on. I guess no one ever tips on that lake.

Incidentally, Ross Lake Resort is a resort. Its rustic, to be sure, but it is most definitely a resort. So in addition to the beautiful scenery, clean water, and abundant wildlife, when you head out on your trip, you will get to feel superior to the people in the lounge chairs who wont be scrubbing their pots with pine cones later that evening.

Being flatlanders from Chicago, we're always suckers for snow-capped peaks. And that's what you get at Ross Lake for 360 degrees. Ross Lake is long and narrow, bordered by mountains on both sides along its entire length. And there is no lack of water falling off the sides of those mountains. You can't go more than a mile or two without passing another cascade. 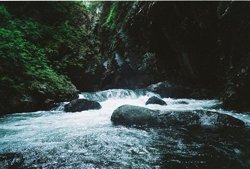 One of the more interesting cascades is where Devil's Creek runs into the lake. To get there, you have to paddle down a narrow fjord. As you get deeper in, it gets eerily quiet and a lot cooler. A quarter-mile from the open lake, the fjord narrows to 20 or 30 feet across. Close enough to the creek to hear it ("creek" implies tiny or trickling; almost all the creeks running into Ross Lake involve a lot of water moving fast) but not close enough to see it, there was a logjam blocking the entire width of the fjord. There, we came upon a power boat, its passengers looking dejectedly at the logs. Their vacation would not include seeing Devils Creek crashing into the placid waters of the fjord. However, our vacation would include that. With a kayakers-will-rule-the-earth harrumph, we slipped past the power boat, started working our way through, over, and around the logs. We broke through to the other side, into what was, at least temporarily, a de facto wilderness area. We paddled around the last corner and there was the creek with the spigot turned all the way up. We played in the current for a few minutes, trying to see how far up the rapids we could paddle. Once our common sense returned, we made our way back through the logjam and out to the lake.

Our first campsite was on Cat Island, a 12-mile paddle from the resort. We took one of the spots on the west side of the island. We had a view of two waterfalls across the lake. We fell asleep to the distant roar of those falls, which, oddly, sounded just like my neighbors air conditioning unit back in Chicago.

The next morning we paddled to the east shore, dragged our kayaks into the woods, and started on the trail to Desolation Peak. The trail is steep. Before long youre high enough to get a great view through the occasional gaps in the trees. Youll want to take a picture. But dont bother. The views keep getting better. On the way down we wondered why we had spent so much time on the way up photographing these humdrum vistas. 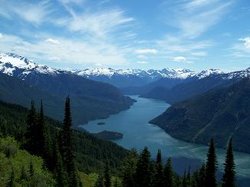 After two hours of climbing, about halfway, the trail breaks out into the open. At this point you can start taking pictures and not be embarrassed about it on the return trip. There great views of the lake that go on for miles and the ground is a kaleidoscope of wildflowers. 30 minutes from the top we came across our first patch of snow. We all obeyed our inner 8-year-old and threw snowballs. Eventually the snow banks covered the entire trail, but by then we could see Kerouacs firewatch at the top, so we bushwhacked (snowwhacked?) the rest of the way. The view from the top is stunning no matter which way you look. Use this opportunity to burn through your cameras memory card.

At Cat Island, out in the middle of the lake, we hadnt seen any mosquitoes. We made the mistake of thinking the whole lake would be like that. The next day we paddled eight miles south to the Big Beaver campground, located at the mouth of Big Beaver Creek. The campground is tucked away in a big delta, so the mosquitoes could operate without so much interference from the wind. And operate they did.

The next day we walked the Big Beaver Trail. It meanders through an ancient cedar forest, following Big Beaver Creek upstream. The cedars along the way are comically big. We finally passed a couple ponds with beaver lodges; answering my question of whether or not the trail, campsite, and creek were named after local residents, or just a fabrication of the Ross Lake Marketing Department. We marched several miles until we hit the wilderness area. We walked ten feet into the wilderness area, turned around, and walked back.

If I ever find myself at Big Beaver again, this is what I will do instead: I will pack a wetsuit, a PFD, and a helmet, and I will head out for that same hike. Six or seven miles in, when the trail breaks away from Big Beaver Creek, I will put on the three things I packed along, jump into the creek and float home. Big Beaver is a big, swift, emerald-colored creek with few patches of white-water. It would be a great float.

Big Beaver has a lot of tent sites. It was almost entirely empty while we were there, but it seems like it would be uncomfortably crowded if it were close to full. The fishing season on Ross Lake doesnt start until July 1. We went during the third week in June. We saw just a handful of boats and people during our trip. I was told that come July 1 the lake gets a lot more popular.

Ross Lake is a spectacular paddle trip. I would be happy to do it again. But the lake is there because of a dam and there is a strangeness to the whole place. The shorelines dont look exactly right. In the shallows you can see the tree stumps that used to be a forest. If youve been on enough lakes, you can feel that this one is different somehow. In the end, Seattle has to get its power from somewhere, and if it has to be a dam, it might as well create a great place to kayak.