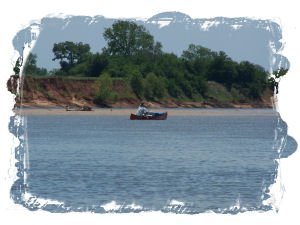 When most paddlers think of the Texas Red River, if they think of it at all, they consider it a prairie river of muddy flow hosting whirlpools and suckholes with arid brown banks devoid of trees, quicksand in the riverbed and water moccasins lining the shore. And they might very well be right, at least when thinking of the stretch that runs through the Texas panhandle and then forms the Texas-Oklahoma border. But at Denison, Texas a huge dam halts the Red to form the massive 89,000 acre Lake Texoma. The silt and minerals that give the Red its muddy color settle down into the lake bottom. The water released from the dam for power generation and flood control is cold and clear, and the river has made a transition from West Texas into Northeast Texas, with its heavier annual rainfall and correspondingly increased vegetation. At this point the Red is a clear running stream with tree lined banks.

On May 17, 2008, Chuck A., Wes W., his 10 year old son Canin and myself put in our 3 canoes into the Red River 12 and a half miles below the Denison Dam at the Carpenters Bluff bridge. This bridge connects Grayson County, TX to Bryan County, OK. It was built in 1910 for the Missouri Oklahoma and Gulf Railroad. It has since been converted to automobile use. There is a wooden pedestrian walkway on one side, but it is in disrepair. The bridge is a favorite destination for bikers on their scooter runs. Our goal was to float the 20 mile stretch from the Carpenters Bluff bridge to the Hwy 78 bridge north of Bonham, TX.

We put in on the Oklahoma side of the bridge. It was a steep, narrow, twisting trail cut into the side of the red sandy bank before letting out onto an open gravel beach. All three of our vehicles got down ok but only two got out. I got stuck right at the top on the way out. Fortunately Wes had a chain and a four wheeler and quickly pulled me out. (Over on the Texas side was a boat ramp but it was on private property. After the trip was over I asked some locals who told me if I had just knocked on the guys door and asked he would have probably let me use the ramp. Next time)

Soon we were afloat and leaving the bridge behind us. The skies were blue with puffy white clouds, the current was moving about 2 mph, we had a light breeze at our back, all in all a fine day to be on the river. We were pleasantly surprised to see that our preconceived notions of the Red were off the mark. This water is surprisingly clear, and the riverbed is lined with huge sand bars of a light red color. The steep red banks , about 10 feet high, are topped with thick green stands of tall pecans, oaks, elms, cedar, cottonwood, and many smaller plants and vines. Often the tree line would open up to lush green pastureland, and we saw a lot of cows on the banks and sometimes in the river bottoms. So it was very colorful in the sense that we were enjoying clear green tinted water, light red sand bars blending into dark red bluffs topped by banks of varying shades of green under a blue and white sky.

This is a remote stretch of river. We may have seen one or two houses at the most, and a couple of fishermen and a farmer or two working on their tractors. The two wildlife sightings of the day were a herd of wild hogs and a bald eagle. Very exciting. 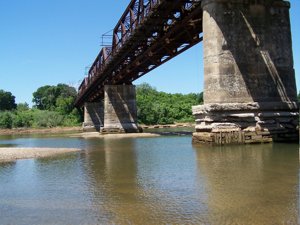 At about 8 miles below the Carpenters Bluff bridge the river bends to the north, right at the mouth of Murphy Creek which empties out on the Texas side. Up until now the river had been running in a south east direction. After this bend to the north, the sandbars turn from red to white, and the texture of the sand from soft to somewhat coarse. The vegetation and water quality remains the same.

We paddled 4 more miles before making camp on a big white sand island opposite the mouth of Pepper Creek, Oklahoma side. There were not any good campsites on the banks. They were steep and privately owned. Pick the highest points on the highest sandbars to make camp, and pull your canoes way up, because when the dam starts generating the water levels go way up.

Supper that night was T-bones with sautd mushrooms, baked taters, green beans and some kind of bread I think, followed up by some cheap cigars and priceless conservation. We slept under a near full moon , woke up to eggs, biscuits, sausage and lots of coffee, then loaded up and headed down stream, 8 miles from the takeout. Two miles downstream from camp the river bent to the east, at the confluence of Chico Creek which flowed in from the Oklahoma bank.

This section of the river was pretty much the same as the previous day, except for the difference in the sand and soil on the banks and sandbars. At one point some rock ledges shelved out into the river parallel to the bank, just under the surface of the clear green water. If there had been cypress trees on the bank I might have thought were on the Guadalupe. The river was shallower too since the dam had stopped generating, and we had to get out and drag over the shallow sandy bottom several times. Where the shallow water met the deep is where you would find quicksand. Be careful.

As we got closer to the takeout we begin to see more people. Some had driven ATVs down onto the sandbars to fish and swim. This is an excellent fishing stream, we saw many fish, some quite large, all during the float. We passed the mouth of Sandy Creek on the Texas bank, just over a mile above the U.S. Highway 78 Bridge take out.

The takeout is on the Texas Side, just past the mouth of Cottonwood Creek. Not a real easy take out in that its steep, about 45 degrees, and rocky with a lot of loose slippery gravel. It leads up to a rest stop and picnic area. This spot is known as Sowells Bluff, after an early settler who ran a ferry here. On the Oklahoma side of the river is an ATV park. The banks on that side arent real high but they are steep.

This is a nice flatwater float. Nothing even approaching a rapid. The scenery is pleasant, if not spectacular. Plentiful sandbars to overnite on, just camp high enough to stay dry if the dam is generating. Strong headwinds could be a nuisance. Prevailing winds around here are from the south and the first 8 miles of the trip head in that direction. Wear sunscreen, a broad brim hat, and take plenty of water. The river bed is very wide and youll have to make your own shade. Youll also have to arrange your own shuttle.

If you need a place to stay before or after your Red River trip, there is Eisenhower State Park on Lake Texoma close to the dam. Right below the dam on both sides of the river are Corp of Engineer campsites. If you want to do this trip and need some info please dont hesitate to shoot me an e-mail.

Corp of Engineer campgrounds below Denison Dam and all around Lake Texoma.

"Texas Rivers and Rapids" by Nolan and Narramore