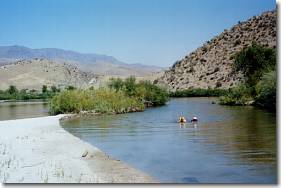 We finally got to the put-in near the Montour Wildlife Refuge in the late morning after missing the turn for the bridge once. I was hoping that missing the turn would be the only problem we'd have on this trip. It had been more than 15 years since I had been in a canoe and Beth (my wife) and Erika (my 13 year old daughter) had never been canoeing before. It wasn't yet noon and the temperature was already in the low 90's so we were all looking forward to an afternoon on the river to keep cool.

We had driven up from Boise that morning after I rented a 17' Mad River "Revelation" canoe from a local river outfitter. (www.idahoriversports.com) Beth had packed sandwiches in an ice chest and we stopped in Emmett to stock up on cold sodas and ice to keep our food cool on this blistering day. After figuring out how to get to the access point, (the dirt road down to the river bank is actually a few hundred yards south of the bridge), we unpacked the gear and got the canoe down from the pick-up. After loading the canoe, we all gingerly took our seats and pushed off without anybody flipping out of the boat. First obstacle had been overcome. I was feeling pretty confident. 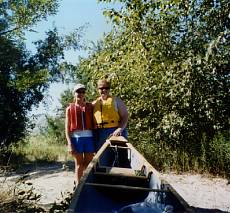 The Payette River is world famous for its whitewater but it is often overlooked for many short sections of quiet water. The guide book that I had used to plan this trip said that the current on this part of the river could be tricky for novices, which we definitely were, but after a few strokes I started to get comfortable and settled into an easy rhythm. This section of the Payette is very winding. I was in the bow using my new GPS (a birthday gift the month before) to navigate and Beth was in the back trying to get the hang of steering the boat around the many bends and twists in the river. Erika sat in the middle and dragged her hand in the cool water and did as good a job of sitting still as one can expect from a pre-teen.

While using the GPS, I learned that it is of limited use when trying to navigate a winding river. Our "take-out" was going to be the upper boat ramp at Black Canyon Reservoir, about 3 miles, "as the crow flies". I had entered the point into the GPS when we dropped off the shuttle car. I was surprised to see the GPS would often indicate that we were only a mile or less from the take-out when the map indicated twice as far to paddle due to the twists in the river. It was also odd to see the pointer on the GPS pointing left or right of us as we traveled down river. At one sharp bend it even pointed slightly behind us. Lesson: Don't rely on technology; trust your old fashioned map.

As the fast moving Payette River slows down, just upstream of Black Canyon Reservoir, the sand & sediment that collects here creates a maze of sand bars and islands. The sand bars are a real challenge to maneuver around especially for beginner paddlers and we got stuck several times. Whenever this would happen, I'd hop out and pull us to deeper water and we were on our way again. Beth and Erika took great joy in this and yelled "Mush, mush!!" and motioned "cracking the whip" at me each time. The islands that are created as the water slows down also are a haven for birds and small animals and we saw our share. We crept up on a Great Blue Heron before he spotted us and flew up from the river. We saw an Osprey snatch a fish from the river and watched as a pair of Bald Eagles glided over a ridge and disappeared. 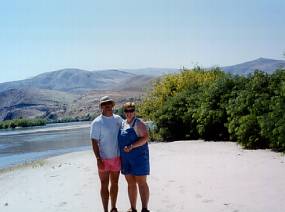 About an hour and half into the trip Erika said she was starving so we looked for a spot to pull off. We found a large sandbar with heavy bushes along one side. We pulled the canoe up, spread out a blanket and had a picnic. After eating and stretching on the hot sand we were ready for a swim. We decided to break the cardinal rule and didn't wait an hour after eating. I took off my PFD and took a quick dip in a shallow side channel. Erika and Beth had fun floating in the current with their PFDs on. After we had our fun in the water we packed up and continued down river.

As we left the river channel and entered the upper portion of the reservoir the warning that I read about in the guidebook regarding afternoon headwinds became apparent. Although it made for difficult paddling, the wind was welcome relief from the heat. After some hard paddling against the wind we passed the park and picnic area just upstream of the boat ramp. We gave a wave and shouted "Hello" to a group enjoying a picnic in the park and we headed for the ramp.

This afternoon adventure was a great memory for me and my family. It was remote and secluded enough to be exciting, but calm and short enough to be a perfect introduction to the sport of canoeing. I know I am hooked and I look forward to many more of these trips.

From Boise: Drive North on State Hwy 16 to Hwy 52 Turn onto Hwy 52 at Emmett towards Black Canyon Dam. Continue past Black Canyon Dam 7.5 miles to Montour Road Bridge. Look for signs for Montour Wildlife Refuge after the dam but before the turn for the bridge.