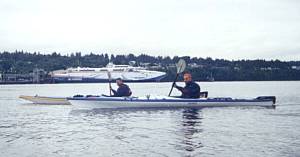 In July when my wife and daughter were on holiday in Saskatoon I received an invite from Rob and his wife Jackie for supper. Rob had been out on his first paddle with Paul and I in the Chemainus area a couple weeks before. I suggested to Rob that we go for a paddle before supper. I wanted to look at a kevlar kayak for sale on Protection Island. I picked up Rob at his home in Nanaimo and we headed to the water.

Just south of the Nanaimo Yacht Club is a great little launch site by a sign for the Queen Elizabeth II Promenade. The launch site and the promenade entrance are located in Nanaimo on Newcastle Avenue near Benson Street. There is usually free parking close by and the distance that the boats need to be carried is short and not very steep.

The launch area is a very small sandy cove that holds only a few kayaks at high tide, but is much larger at low tide. This site is probably the best kayak access to Newcastle Island Passage, Newcastle Island, Protection Island and Nanaimo Harbour.

We unloaded the boats at the park and then I parked the 4-Runner nearby. It was a warm sunny day but there was some wind and chop. Fortunately the launch site is protected and calm. The stretch of water from Nanaimo Harbour to Newcastle Island Passage seldom becomes very rough, but can have winds to paddle against. Outside the gap past the two islands is a different story. We stowed our gear in the hatches and put on our sprayskirts and PFDs (personal floatation devices). Rob grabbed the sterns of both boats and I grabbed the bows. Down to the water we went and off we paddled.

Crossing the Passage took less than two minutes once there was a break in boat traffic. Once across we started following the shore of Newcastle Island heading south. Newcastle Island is a large Provincial Marine Park (about 2 km. long as the crow flies and 10 km. in circumference as the kayak paddles). It offers camping, hiking, swimming, a museum, cafe and a lot more. 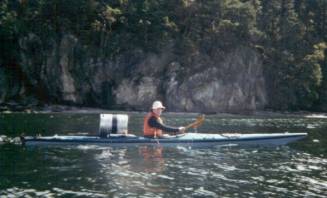 Quarries exist on the Newcastle Channel side. The sandstone blocks were used in several famous buildings along the West Coast. Herring salteries, ship yards, and a rich First Nations history are all part of the discovery of this once luxurious Canadian Pacific Railway recreational park. Bill Marilees has recently written a book titled, "Newcastle Island - A Place of Discovery" on the history of the island (ISBN 1-895811-58-9). Once around Bate Point we followed the shore eastward across Mark Bay. There were some beautiful boats anchored in Nanaimo Harbour. We paddled close to a few that had people out on deck and spoke briefly to them as our boats glided by. We've met some interesting people this way. Once past Mark Bay we crossed over to Protection Island and started looking for the landmarks that I was given.

I was told to look for a sailboat and rowboat moored together after a yellow house but before a brown house. This won't be easy I thought, as it seemed every house was either yellow or brown and most boats in view fit the rest of the description. However, on shore I could see a couple carrying a kayak down to the water's edge. As we got closer, I recognized the couple and knew we were in the right spot. We slipped up onto the sandy beach and got out to look at what might become my daughter's next kayak.

Besides the obvious handling and comfort performance, a boat, in my mind, needs easy access hatch covers and should to be beautiful to look at. Although this boat was light as a feather being kevlar, it lost points elsewhere. When Sandy told me that she hadn't really made up her mind about selling it, I had already decided it wasn't the boat for Katherine. Sandy insisted that I take it for a paddle, which I did. It handled very well, but after owning four kayaks and paddling many others, I had become fussy.

Rob and I decided to finish paddling "the Gap" between Newcastle and Protection Islands and see how rough it was on the outside. As Rob hadn't been to Newcastle Island before, we pulled into Brownie Bay to look at the camping area. Rob has two small children, Dalton and Sienna, and the family enjoys camping. After a brief walk, we were back in the boats.

The wind had calmed as we left the Gap, but there was still a breeze. We turned north and traveled along the outside shore on Newcastle Island and admired the view of the snow capped mainland mountains across the Straight of Georgia. After what seemed like 20 minutes we came to the large bay on the Vancouver side of the island.

It is named Kanaka Bay after a Kanaka (Hawaiian or South Pacific Island native) who axe murdered his First Nations wife, in-laws and his child in 1868. The police found him at a campfire near the beach here. He was convicted and hanged in 1869. Neither the First Nation people nor the area Kanakas would accept his body for burial. He was finally laid to rest in an unmarked grave near Kanaka Bay. Unfortunately, 30 years later his casket, which contained his skeleton and well preserved leather shoes, was accidentally dug up when a new coal mining shaft was started there. A coroner's inquest was held and the forgotten tale Peter Kakua the axe murderer was brought to light once more. Peter was buried once again in an unmarked grave near Kanaka Bay. His ghost stalks the campgrounds on Newcastle Island nightly, or so the story around the campfire goes.

We came in the southern entrance to the bay. At low tide this entrance is dry. After beaching the boats, we walked along the shore to the northern tip of the bay. Actually we waded most of the way as the water was clear and the marine life was fantastic. It was warm enough for a swim, but we were content just to wade.

Back at our boats, we paddled out the north entrance and debated going the rest of the way around the island. As it often does here on sunny summer days, the mid day wind had abated. It was around 4 p.m. and I was getting hungry for the promised meal at Rob and Jackie's place. I knew that we would be at least an hour or two getting back. We decided to head back the way we came, but stop at the main beach near the old pavilion. Gabriola Island was picturesque in the distance and the small ferry that services it could been seen just offshore. After pulling up at the main beach near the old pavilion on Newcastle Island, we went for a short walk and visited the museum, sandstone quarry and coffee shop.

During our first trip, Rob had been an extremely slow paddler and not very adept at paddling in a straight line. This surprised me as he has broad shoulders and strong arms. After leaving the main beach by the old pavilion, Rob shot by me and I had to work to catch up. I commented on this to Rob and he smiled back that he had figured out the knack of paddling. We saw other kayakers heading out as we got near the busy south end of Newcastle Island Passage.

We waited until a few motorboats went by and then crossed. Two-thirds of the way across Rob pointed to a bump in the water out in the Nanaimo Harbour and said, "Is that a bird?" It looked like driftwood to me but maybe it was moving. Most of our paddling isn't in a straight line. We go from "what's that" to "let's go in there" and explore lots of nooks and crannies. The bird turned out to be a very much alive, full-grown immature Bald Eagle that was waterlogged.

What to do? The eagle was riding low in the water and started using his wings as oars when we approached. He was a good distance from land and most of the shore was rocky and hard to climb out on or busy with people. One close look at that beak and I knew that I didn't want to pick up this huge wet heavy bird.

We decided to escort him back across Newcastle Island Passage to a secluded reef off Newcastle Island. We kept our boats about 10 feet apart and the bows even with the eagle. If he became anymore waterlogged and started to go down, I figured that we could help support him with a paddle between the two kayaks. As we started crossing Newcastle Island Passage a 20-foot motorboat had to slow down and detour around us. Next a 40-foot sailboat was bearing down on us. We didn't budge and neither did it. I started to get nervous. The sailboat people saw the eagle and finally veered around us. We backed off as our slow swimmer neared the reef. I gave a triumphant shout as he climbed out of the water and stretched out his dripping wet six-foot wingspan to dry. We turned around to head once more across the Newcastle Island Passage and saw that we had gathered quite an audience of assorted boaters. Soon we were loading the boats on the car. I pulled out my mini-binoculars and had a look at our friend. His wings were now folded down but he hadn't moved. How did the bird become waterlogged? That was the question on our minds. Had he hooked a salmon that was too heavy and couldn't let go quickly enough? Or had he just been young and inexperienced and made a miscalculation diving near the water?

Our paddle had only been about been about 6 or 7 km, but with hiking and all, I was ready for Rob's barbecuing and Jackie's cooking!