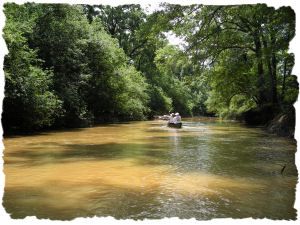 That was a great paddle. Most of the river is very wild and you see almost no evidence of human habitation. There is the typical river trash (cans, bottles, bait containers) that wash up on the shore or collect at logjams, but very little otherwise. There are a few shanties just after the put-in at route 7 and a few more as you get closer to route 94. Some of them are pretty trashy and run down, unfortunately.

On the whole, however, the trip is very scenic. If the gauges at Neches and Diboll start to approach or dip beneath 4ft, you're going to have a LOT of logjams to contend with. The gauge at Diboll was reading 4.35ft while the gauge at Neches was reading 4.90ft by the end of our trip. A small limb saw is a wise addition to your gear for a trip on this river. We made good use of one. When the water is low, there are very few places where you can actually get out of the river channel to portage around an obstacle, so you have to either climb over or cut a way through. We did both on a case-by-case basis, and there were quite a lot more strainers just 6 in below the surface. Navigating this river in mid to low water in a kayak would also be a major challenge. In a high water situation (like the 12-13ft level it was at the end of May when I paddled from Anderson's Crossing to Route 7), boat choice is much less of an issue since most of the timber is far below the surface.

This river is also very slow. There are very few places where you can just float and allow the river to carry you along. To get anywhere, you have to actually paddle.

This is a good stretch of river for wildlife sightings. From the beginning we were seeing alligator tracks in the mud along the banks. It wasn't until about halfway through our trip that we actually saw a small alligator (about 4ft long). Christine and Jimmy saw two other alligators when they were paddling ahead of everyone else, but the rest of us didn't see them. We saw a lot of wading birds, mostly herons.

Some of the little backwaters along the river appear to offer outstanding fishing opportunities. One such backwater was full of fish jumping and a couple nearly landed in my canoe. In a high water situation, it might be possible to paddle into the lake on Pine Island, but at the water level yesterday, there were no flowing channels from the lake to the river. It might also be possible to paddle the old river channel, but the main flow does not go that way and it would probably involve hacking more trees and possibly even walking a few stretches.

We did hear some gunshots at some point, and I'm told that there is a private hunt club along the river. I imagine they've got a firing range and that's where the sound was coming from. Otherwise, the river was very peaceful. We were serenaded on several occasions by barred owls and we saw a few of them along the river. We also saw a red-shouldered hawk, some turkey vultures, and a duck that was having a rather difficult time getting itself airborne. There were a fair number of turtles in the river, too. I got good looks at a map turtle and a red-eared slider. I saw a few turtles poke their heads out of the water for a breather, but I couldn't identify them from that point. 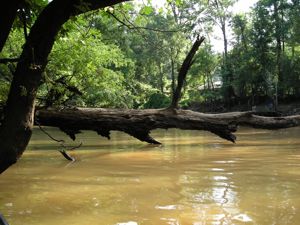 East Texans seem to have some fascination with putting school buses along the river. From Anderson's Crossing to Route 94, I have personally seen five school buses parked along the river, all of them at run-down fishing shanties. The owners probably call them 'cabins' but I certainly wouldn't call a shack made from a random assemblage of corrugated steel and plywood a cabin. Funny thing about them is that they all have satellite dishes, too.

I've become aware of several issues surrounding the Neches River since I moved to Texas. I'm told that the city of Dallas wants to build a reservoir on the upper reaches of the river (it would be the third such reservoir on the Neches). The US Fish and Wildlife Service also wants to designate a wildlife refuge in that same area. The issue is currently floating around in the court system because some landowners sold their property to the F&WS to create the refuge, which made the reservoir project proponents pretty upset.

Additionally, there's a building movement to designate 235 miles of the Neches as a Wild and Scenic River. The stretch of the river included in the proposal runs between the two current existing reservoirs and through the proposed wildlife refuge (and proposed new reservoir). It seems that most locals and even the timber companies who own land along the river oppose the creation of the reservoir and prefer preserving the river in its current state. The refuge would be built from purchasing land from willing sellers only, and from what I understand, at a better price than those owners would receive as compensation if the reservoir were to be built. As an aside, I hear that the timber companies who own land along the river do permit paddlers to camp on their land.

A friend who invited me on this paddle trip also knows the author Richard M. Donovan, who wrote the book, "Paddling the Wild Neches." She helped Mr. Donovan unpack the second printing of his book, and brought me a signed copy that I've started reading. Mr. Donovan has paddled all 235 miles of the Neches that are part of the Wild and Scenic River proposal and is a strong proponent of the designation. I'm only one chapter in, but I'm told it's a great book that covers the natural history of the river as well as a good bit of the river's human history.

Access at route 7 is very good with a concrete boat ramp.

Access at route 94 is poor. There is a dirt road for access, but it is rutted and can be muddy. 4WD is recommended for best access. Exit from the river is tricky due to a lot of mud. Regardless of vehicle capabilities, you'll have to portage your boat some distance. The large number of bars and liquor stores at the takeout makes me nervous about leaving a vehicle for very long. We left an old pickup truck for a shuttle and it wasn't bothered. I hear that improvements to river access are anticipated when the route 94 bridge over the river is improved.

Take route 7 W. from Nacogdoches, TX. Shortly after route 103 intersects from the left, look for river access on the left side of the highway just before the bridge.

From Lufkin, take route 103 W. Shortly after Route 7 intersects on the right, look for river access on the left.

Takeout is on route 94 W of Lufkin. Access is on the S. side of route 94 just before the liquor store.

"Paddling the Wild Neches," by Richard Donovan is very good.