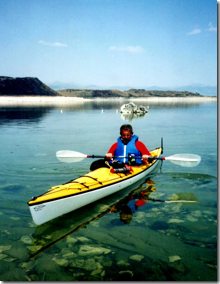 Mono lake is a very interesting place to explore. It is located in the Owens Valley near to Yosemite, Mammoth Lakes, Bodie Ghost Town, etc. If you are visiting the California West, Mono is a place you may consider. Mono is a well-known lake that has no natural outlet. It's salt content is twice that of the ocean. The paddling is generally "easy"; it is a lake to explore, not one on which to have paddling challenges. However, portages can be long and winds can suddenly "come up" in the early afternoon. This is a desert, after all. Signs warn that boaters have been rescued or have lost their lives when unprepared for windy conditions on Mono.

Mono is the largest nesting/brooding area for Sea Gulls in the West. 80% of all gulls in California are hatched here. Mono has been the subject of controversy and outrage in California; the Los Angeles Department of Water and Power has diverted water flowing into the lake and the levels dropped. This allowed predators to take a new land bridge onto Negit Island and attack and eat nesting birds. This situation has been changed and the birds are in much better shape now. 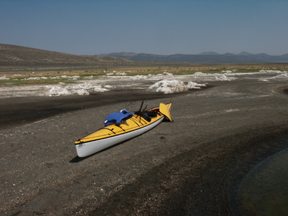 Mono is, again, a salty lake that is 14 miles across. Mark Twain called it the Dead Sea of the United States. There are many interesting geologic features of the lake, including large Tufas, which are towers made from mineral precipitates due to volcanic activity. The lake also features very specifically adapted plant and animal life. Plant life includes bushes adapted to the lake's environment and the animal life includes brine shrimp (harvested for goldfish food) and many flies that feed on the algae, and I believe, shrimp. The flies form a black carpet in spots, but do not land on humans!!!

Our paddling adventure was very rewarding. The salty water was very calm and like a mirror until 1pm when we got off the lake. We went to Negit and Paoha Islands which are barren, but volcanic and basaltic. Paoha featured some remnants of a settlement there that was established in the '40's. That settlement was a small health spa and goat ranch. We observed some wooden remnants of that.

I have been told that there is an old movie set on one of the islands; a big wooden "volcano". The Clint Eastwood movie, "High Plains Drifter" was filmed on the south shore of Mono, but the set is long gone. 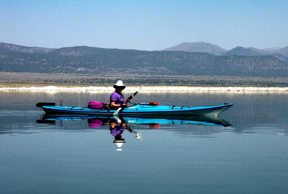 I highly recommend a visit to Mono, it is eerie, primordial, and hauntingly beautiful. It is a huge departure from calm lake shrouded in foliage. Heed the weather warnings and use commons sense. Consider launching from Navy Beach to see the tufas. Consider launching from Black Point ONLY if you are hardy and don't mind a long portage and are particularly interested in seeing at least two islands.

None at lake per se. There are forest service interpretive and guest areas that are of interest. We suggest that you launch from "Navy Beach" on the south side of the lake off of state highway 120. We launched from Black Point on the north side of the lake. We were closer to islands, but the portage was 1500 feet from the parking area instead of the promised 500 feet promised by a friend with a poor memory.

There are many fine facilities for food, lodging, recreation, fishing etc. Mammoth lakes, California, is 30 miles to the south on 395, Reno is 100 miles north, Bridgeport is 30 miles north, Lee Vining is on the west shore of Mono Lake, etc. Mono is a great lake to visit when one visits the Sierra Nevada on the Eastern Side.

Two sea kayaks...one Cape Horn 15'-9" boat in Kevlar and one QCC 500 16'-10" in Kevlar. We took pfd's, extra food, rescue equipment, an extra paddle, but, most importantly, about a gallon of water. We left the cell phone at the car which was not particularly prudent, although we were close to others on this day. (A guide service that "works" the lake regularly.)

My most important instruction is to: Prepare for a confused and difficult and windy sea, but you may not see that. Don't be seduced by a glass surface in the am; you may get "bitten" which is typical on the desert. Take more water than you think you will need. Stay on all official roads; don't make your own trail near the lake via vehicle or you very likely will get stuck.

From the south, Los Angeles area, take 395 to Lee Vining, California, and you will see the lake, find the Chamber of Commerce, etc. and get many directions. From the North, just take 395 South. Mono is a big lake and stands out on any California state map. Mono is in the Eastern Sierra area and is 120 miles south of Reno and close to the east entrance to Yosemite National Park.