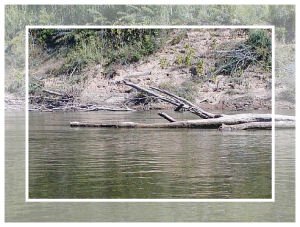 I have been kayaking with friends for about (2) years and my addiction to the water has grown deeper with each trip. I began pestering some of the leaders of our crew to do an overnight trip sometime in early 2008. I had my sights set on the Edisto River, until my friend Jake told me about a 31 mile section of the Pee Dee River that was ideal. He sent the first email in July.

I hit Google Earth and did some figuring on possible beach camp sites. I brought the trip up in every conversation, but no one seemed interested in taking the lead in planning this trip. So I took on the planning my first river trip. I started in mid Sept. polling people to determine who was really interested. The core of our group is law enforcement officers in diverse fields, so scheduling proved to be difficult. We finally settled on the last weekend I felt comfortable, weather-wise, going on the river as a Novice (Nov.1 & 2). With the date set, our numbers dwindled to three from the core group and 2 friends.

2 of us are in forensics, so nearly 100 emails were sent back and forth to arrange the equipment and menus. Don't mistake our thoroughness for OCD. We even met to dry fit the boats. That proved to be smart. As big as my boat seemed, my backpack dry bag just would not fit. 5 smaller dry bags proved to be the way to go.

The 2 weeks before the trip, things broke loose at work Remember that 2 of us are in forensics. I think the final tally was 5 death scenes. To say that we were ready to get away on this trip would be the biggest understatement of the year. Even my wife was looking forward to this trip for me.

It was chilly as we descended the steep concrete ramp to the river. A blanket of Fog hitched a ride with the current, which moving at a steady pace. The world as I knew it faded, or in actuality was out shined by God's creation. We got the boats packed and slipped into the frigid water. I was amazed by how beautiful it was and how far from civilization we were. I was in awe of the towering red bluffs and the hundred year old trees struggling with the bluffs to stand. The edge of the river held numerous victims that lost their battles. I soaked in the peacefulness and quite stillness of my surroundings.

The first four miles flew by as my head swiveled side to side to take it all in. The guys in the Hobies were ready for a stretch, so we beached on a pebble shoal in a slight bend of the river. We all had that honeymoon morning smile as we wandered around the rocks. Bo and John found some fresh water clams and got some cool photos. We found evidence of impressive sized deer on the banks, along with several large cat tracks. This helped encourage me to get moving.

As we continued on, we began to see more grey heron and wood ducks. I could hear the crashing of hoofs against dry limbs in the thick bush along the banks. I remembered the Google Earth overview of the river and how large the stands of woods were so far away from any civilization. I imagined how large the deer would be as they bolted away from the sound our conversation. I continually gave thanks for what I was experiencing.

We were on a slow pace and ate lunch as we paddled. 1 of the guys that came with us was new to paddling and in a Hobie. The peddling was easier for him, but the distance we had undertaken on this trip may have been too much for one of his first few trips.

As we approached the 13 mile mark, the discussion turned to when or what distance we would stop to make camp. Mileage calculations made us concerned that we would not reach the beach that was two-thirds the distance to the take-out with enough time to make camp. We took a break on a beach I had marked as a halfway point suitable for a campsite. I pushed for the second campsite. My thought was on day two muscles would be sore and tired, making for a long day. I also hoped to finish the trip with enough time to see my family.

We decided to press on and muscle out the next 6 miles. We discussed possibly running 2 kayaks ahead of the group to set up the tent and start a fire, but we stuck it out together. As we approached the camp site beach, we observed for the first time, people on the river. It was a group of hunters on four-wheelers parked on the pebble beach. We had a brief conversation with them and paddled around the 90 degree bend to the sandy beach. We beached and stretched our legs for a minute. We then heard the four wheelers getting closer. The hunters had come around to investigate who the crazies were crashing on their hunting club's beach. The conversation was polite, but tense. It did not help the situation when one on the hunters made a "Deliverance" reference. The older gentleman of the group made us for cops fairly quickly, thinking we were State agents. We informed him otherwise and the conversation turned to the work on the death scenes he had seen in the news. They finally felt comfortable enough with us to leave and even invited us to a party 2 miles in from the river.

We got down to the business of making camp. We worked with great efficiency, be cause we were tired, hungry and ready to crash. Bo brought chili and got it warm just as it grew dark. It was just the ticket for tired paddlers and the dropping temperature. I listen to the crackling fire and laid back to take in the billions of stars dotting the black sky. This is the life. We all turned in a little after 9pm, but the sound of four wheelers in the distance concerned me somewhat. 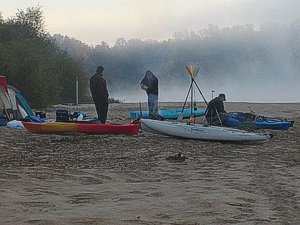 I woke up around 6 am, but did not mind too much. I was able to uncover some of the coals and start another blaze with very little effort. Morning priorities in camp 1) fire, 2) coffee & 3) food. There is nothing like sipping good coffee in the freezing cold while watching the fog rolling on the river. My now roaring fire encouraged others to wake up, so Bo and I started on breakfast. Grits, eggs and sausage (fat boys in SC, did you expect granola for breakfast).

We had a slow start and moved farther off my unwritten schedule. But, surprisingly, I did not mind. The brush on the banks thin slightly and the conversation was less, so I saw the whitetail bedded down near the edge of the river. We also spotted more grey heron. In the distance someone pointed out what we thought were hawks. As we paddled closer, we realized that these huge birds were turkey vultures. Obviously they smelled how tired we were from the mileage we were grinding out. The banks of this section are lower the first section, but the scenery was still outstanding. About 2 miles from the takeout, we picked up a stray. A lost beagle with a tracking collar saw us in the river and decided to follow us as long as he could. He made it about three quarters of a mile before running into too steep of a slope and an oak that had lost its grip on the bank.

With less than a mile to the take out, we heard and saw the riffles of this shallow and rocky section. At this point the Hobies had to pull in the fins and paddle. If you do have a Hobie or a deep draft boat, you may not like this section. Remember to go right of the pebble island and then left of the rapids when the bridge at the SC 34 landing is in sight. Some of us are planning to go back to tool around in this section when it warms up. Some of the rapids look to be class II.

This was an outstanding trip and helped me to be revitalized. I was a little long for some of the guys, but I plan on doing it again. Planning and physical preparation is a must, but the scenery is worth it. SC law states that up to the waterways high water mark is public right of way, so beaches and sand bars are fair game. Weekend paddles are ideal because the weekly water release is on Tuesday and hits this stretch of river on Wednesday. Another good tip, request extra patrols from the Darlington Co. Sheriffs Office if you leave vehicles at the landings.

Tent and a Beach

google earth and a GPS