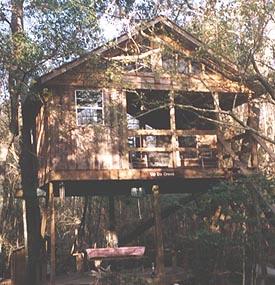 Ever dream of a simpler life in a simpler time? How about wonder what Henry David Thoreaus life in the woods was really like? Thanks to a tree house on the Edisto River near Canadys, SC I no longer wonder, because I know.

I met Scott Kennedy, the founder and owner of Carolina Heritage Outfitters, on a cool Sunday morning. The sky was blue, the river black, and I was filled with anticipation. Scott, who had the relaxed and confident appearance of someone who had truly found his notch in the world, went over the itinerary for the next two days. The plan was simple enough, put our canoes in approximately twenty miles upriver and float back down to the outfitters. We were to stop half way at his 150-acre wildlife refuge, which among other things contained a couple of tree houses. There were three of us on this trip, my friend Jim, Uncle Carl (My wifes Uncle actually) and myself.

We slipped our canoes into the water at the landing near Whetstones Crossroads and were on our way. Each would be paddling solo this trip, one to a canoe. There is little development on the river, an occasional river house or camp will pop up here and there but for the most part you have a wonderful feeling of solitude. In fact we only saw only two other boats in our two days on the river. After paddling for about four hours the first tree house came into view, it had stairs that led up to a deck complete with a grill and picnic table and then more stairs that led up to the tree house. My heart sped with excitement, I felt like a boy on his first overnight scout campout. Our tree house was further around a sharp river bend putting us behind the first tree house.

Arriving at our accommodations for the night we stood in view of a majestic tree house with a raised deck directly below and a carved sign reading Up Da Creek nailed to it. The tree house was surrounded on three sides by water, the river in front and a creek making an L bend covering the back and one side. Behind the tree house was a footbridge that encouraged sobriety. It hovered just inches above the small but swift creek and leaned ever so slightly to one side. The bridge led to the paths taking you to the other tree house, a cabin, out house and numerous trails throughout the wildlife refuge. We unloaded the few supplies we had brought along and carried them up to the top of the stairs. Up Da Creek was as wonderful on the inside as it was on the out. The tree house had an ample kitchen stocked with tin plates, coffee cups, old-fashioned percolator, cast iron cookware and a well-used wok with a lid that had a stag handle. There were all the necessary seasonings as well as corn kernels and directions for wok made popcorn. Situated over the porch was a large sleeping loft complete with mattresses and a great view of the river. Decorating the house were game boards, books, kerosene lamps, candles, a Native American drum and hand carved flutes. On the porch there were a couple of rocking chairs, more candles and a wonderful washtub bass that gave out a great rhythmic thump when plucked bringing out a feeling of primitiveness from deep inside. No electricity or running water was to be found, the closest thing to modern convenience was propane, which ran a large grill, heater, stove and one light in the kitchen. After a thorough inspection we left the tree house and hit the trails.

Crossing the bridge felt like crossing over into a much simpler and meager time. A feeling of being in Henry David Thoreaus book Walden overcame me as I walked the wooded trails. There were several well-marked loops that led past cypress bays, small creeks, ancient oxbows, primitive tent camps, and a couple of ponds. The layout of the property made it feel much larger then its 150 acres. A person could spend weeks here and never discover all of its secrets. Trees of all types and sizes abounded from brush oaks and small pines to large tall cypresses. This place is truly a Lowcountry treasure and I wished desperately I had one full day and my fishing rod instead of just an afternoon and my hiking boots.

Around the deck there were several Tiki torches that we soon lit after our return from the woods. Torchlight reflected off of the water and trees making the woods and river seem enchanted. Three big beautiful steaks were thrown own the grill and the aroma that formed from a mixture of searing meat and torch smoke was heavenly enough to make the most dedicated vegetarian fall off the wagon. Upstairs in the cabin good old-fashioned baked beans were warming in the cast iron skillet. On the table sat a loaf of sweet bread, three tin cups and a bottle of Greek Red Wine. A better meal I have never had. After dinner talk was all about the days events. It seemed that work and worries were non existent, no mentioning of deadlines or things left undone to make the trip ever made its way into any of our conversations since our arrival at the tree house. A feeling of such freedom is rare in most peoples lives, and we were lucky to get the chance to experience it.

Before hitting the sack I walked out on to the porch sat in a rocking chair and lit a cigar. It is then I noticed the trees on the apposite riverbank. It seems the full moon had risen from behind the tree house and all of the trees were engulfed in glowing moonlight. A more beautiful ending to a more perfect day I have never known.

After a night of blissful sleep aided by the sounds of rushing water it was up and at um. A quick breakfast of sausage and pancakes, a little tidying up, washing dishes, and stretching sore muscles and we were on our way. The canoe glided forward to our destination, but my heart yearned for the tree house. I found my canoe set on cruise control and my mind reliving the past two days adventure.