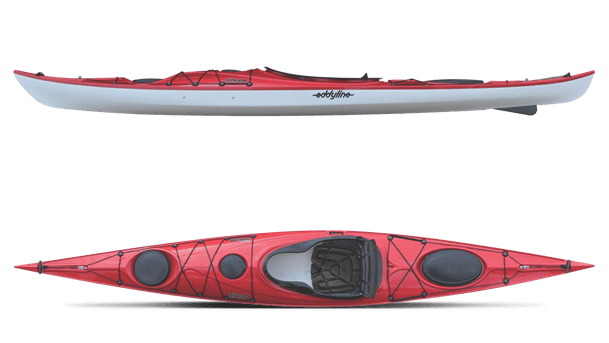 I purchased this boat with the intention of taking it out to large rivers and lakes in Oregon. At the same time, I wanted a sea-worthy boat that could be paddled in Puget Sound. The Sitka LT has not disappointed me yet!

If you're accustomed to wider boats such as I was, the Sitka LT will feel a bit "tippy" at first. But don't let that put you off as like with any new boat, you have to take some time to learn how it responds to you on the water. In my case, I felt completely at home on the Sitka LT after just a few hours of paddling. The chines while on edge feel very...defined. Like it's either "on or off". I'm not an advanced paddler but I have found that with some mild edging, the boat has an excellent turning radius. I have no problems maneuvering around and weaving through trees in the Tualatin River. This also feels like a fast boat for its category. Compared to other thermoformed and rotomolded kayaks I have recently paddled, this boat glides effortlessly through the water and can be brought up to speed with ease. You'll really just need to demo one to know what I'm talking about.

Tracking of this boat is also great. Point where you want to go and you're going there! I have also paddled through windy conditions where I found the adjustable skeg to be a useful component. Speaking of the skeg, I love how Eddyline incorporates their skeg control. It's a metal rod with a plastic nob sitting inside a recessed rectangle to your side. Sliding it all the way back fully deploys the skeg. Sliding it partially down allows you to feather the skeg.

The Sitka LT incorporates a day hatch located at the front of the cockpit. It's a bit small compared to a Delta front day hatch but it's more than enough space for my keys, wallet, phone, couple granola bars, and still with some room to spare for small items. I don't think if this was intentional or not, but the day hatch has a flat smooth surface with no logo on it. This makes it the perfect spot for a GoPro suction cup mount. I can even swivel the camera by rotating the day hatch left and right. Really love that because without it, I would have to figure out a new way to mount a camera while keeping it level.