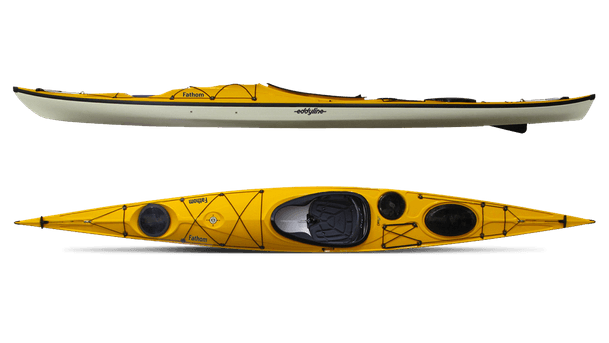 I have owned my Fathom for nearly a year now. I paddle several times each week from ice-out to freeze-up, usually March thru December, with some pool time in the winter. I am 67 years old, have been paddling for over 50 years but since I live in the flatlands most of my paddling is in pretty calm water so I consider my skill level as only intermediate.
I am 6'4" and 200 pounds and the Fathom is a good fit for me. I paddle with the adjustable seat all the way back to best fit under the thigh braces but there is several inches of adjustment to the foot braces forward and back for anyone who wanted the seat further ahead or for anyone shorter. Best of all there is plenty of toe room as long as I choose my footwear wisely - thick soled shoes, boots, or sandals will hit the underside of the deck. I wear mesh water shoes in warm weather and neoprene booties in cold weather.
I usually enter the kayak by sitting on the rear deck and sliding into the cockpit but the cockpit on the Fathom is large enough so that, with the seat all the way back, I can get my feet and legs in or out from a seated position in the cockpit, which is handy sometimes in rescue or re-entry situations.
The kayak weighs 50 pounds, just as advertised. The hatch covers open and close easily and keep the water out during rolling and rescue practice. All the rigging and fittings are good quality and well designed with a couple of exceptions which I will address later.
Performance - this kayak is my go-to kayak (I have a total of nine kayaks). The Fathom has great stability, both initial and secondary. I have had it out in conditions from dead calm to 25 mph winds and it never made me feel like it was even close to going over. It does an edged turn easily and is easy to keep on edge. The skeg keeps it tracking straight no matter the wind or wave conditions. I have found that I use the skeg in all but dead calm conditions to keep a straight course with out any other corrections but it doesn't seem that the skeg adds any noticeable drag to the kayak.
'Fast' is a relative term and although the Eddyline website and many reviewers claim it is a fast kayak I don't find it any faster than any of my other touring kayaks. It seems my basic sustained speed is around 4 mph in almost any kayak of decent design - maybe it's a paddling technique issue and not a kayak issue.
I only have a few issues that are negatives to me.
1. The seat bottom is very comfortable but the backband has a hard ridge all the way around it instead of padding on the edges that made if very uncomfortable for me, especially when doing roll practice. After numerous attempts to adjust it I finally removed and replaced it with a block of foam that just supports my spine. That also eliminated the nuisance of the seat back folding forward when doing re-enty from the rear deck.
2. The plastic tube that the skeg cable runs in came loose from the control box in the cockpit. I haven't been able to get it re-installed successfully - it doesn't seem to effect the function of the skeg other than that it allowed some flex to the cable.
3. Besides the added flex to the skeg cable that was caused by the loose fitting it seemed that the cable was not supported at enough places along its routing to the skeg box. This allowed even more flex to the cable. The flex limited the straight line push from the control knob to the skeg box that is needed for positive skeg control. This was improved by using some high quality duct tape to secure the cable tube to the inside of the hull. A couple extra factory attachments would be a big improvement .
Overall this is a great kayak and if it were ever stolen or seriously damaged I would by another in a heartbeat.