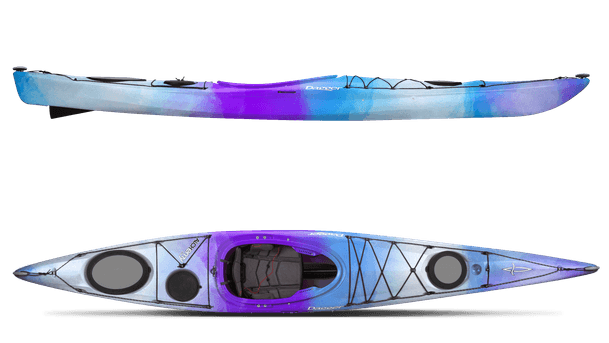 by Dagger
Details
I've had an interest in the Alchemy for several years, but had never had the opportunity to paddle one. Having sold my seakayak last fall, and having a trip to Hatteras Island, NC planned for this past weekend; I bought an Alchemy 14.0L without a test paddle.

After about 5 hours total paddling, I am very pleased with the purchase. First about me - 6'0", 210 lbs. Fairly experienced paddler in both ocean and whitewater, but have not paddled for the last year post a shoulder injury. In general, I greatly prefer maneuverable boats and don't mind trading some tracking or speed to get it.

Conditions - Ocean side, 1.5 - 2.5' shore break and swell. Also paddled at Cape Point in confused claptois type conditions. Sound side, winds about 15 and running across the 1' wind chop.

The Alchemy exceeded my expectations in the surf and claptois - loved how controllable it is on a wave. Several times, I was able to bring it back on line after starting to broach pretty significantly. I'm not a great surfer and was definitely rusty, so it made me look better than I deserved. Speed is acceptable, but if max speed is your objective you probably aren't considering an Alchemy.

Perhaps more surprising was how much I enjoyed the Alchemy in the wind chop. While it did weathercock more than I expected, it was highly responsive to the skeg. I could leave the skeg up and control with edging and sweeps; but found that by adjusting the skeg - I could paddle my desired course across or even away from the wind or waves without extra effort. Playing with the amount of skeg deployed reminded me of using a rudder and setting it to hold course.

The boat is lighter than I would expect for a 14' plastic boat and shoulder carries well. It is a wetter ride than many similar boats, owing to the relative low volume in the bow and low deck height. I particularly noticed this paddling into the waves and wind while on the Sound. Having barely paddled for a year, the impressive primary stability was appreciated. It felt a little less comfortable way over on edge, sculling than I expected with the hard chines to lean on. Perhaps just a function of my rustiness.

Overall, very pleased with my first weekend of paddling in the Alchemy 14L

by Liquidlogic Kayaks
Details
I have been paddling my Pisgah for 4 months now. Approximately 30 trips and 200 miles in and you can really see the compromise nature of this boat - good and bad. I am 6'0, 205 and the boat fits me well.

First the bad - some real quality issues: front bulkhead was not sealed fully, big enough gap to get my pinky through in two places. Appeared to be a miscut bulkhead as much as a lack of sealant. Hatch covers were super tight, applied 303 and they got super loose. They are difficult to get sealed securely and I have had them pop off when doing reentries. Plastic seems thinner than similar boats (Manitou, Carolina, etc) - my hull has deformed around the seat with one pronounced hump where the front left seat connection is. Scratches easily, but to be fair I have not babied it on the rocky rivers around here. In chop of 2' or more it oilcans much more than other rotomolded boats I've paddled. While probably harmless, it is disconcerting.

So all these negatives, what do I like about it:
Does everything tolerably. I can comfortably run it through Class I and II rapids, while not super fast it cruises comfortably (although with a noticeable bow wake), takes an edge well and tracks decently with edging - even in the wind. It is very responsive - with aggressive edging and weight transfer (i.e. leaning forward or back) it will turn tightly either into or away from the wind. The pronounced rocker at the stern makes it much more playful than this boat would otherwise be. I have successfully rolled it although it has been an effort to get there. Tons of volume. Surfs well - you can put it on top of a wavetrain and play pretty effectively for a 14' boat. I've had more trouble surfing wakes/waves; mostly related to accelerating quickly enough to get on top of them.

The boat is very comfortable and purchased used (read inexpensively) it has been a great step up for my rec boat. It has really allowed my skills to develop and by not going with the rudder it has forced me to pay attention to how the boat responds to my body and paddle.

Relatively low rating is related to the general quality of the boat particularly stiffness of plastic. Compared to other similar boats I've paddled, it seems better preparation for a "real" seakayak. I'm still contemplating using the Pisgah for a 10 day paddle next year on a combination of rocky rivers and big water. It will remain my boat of choice for river trips with long flatwater sections between ripples/Class I and II stuff.

by Perception
Details
he Montour 11 was my first kayak, purchased one year ago. Purchased from Dick's, it came down to a decision between a Perception America or the Montour. Glad I went with the Montour - while definitely a rec boat, it has some attributes that will make the transition to touring boats easier. I like the tighter cockpit, harder chine which makes it easier to edge and deployable skeg. The first time I paddled my Montour, I could not keep it from turning circles without the skeg - a year into it and the only time that I use the skeg is when the wind is really blowing. Compared to other rec boats I've paddled - Pungo, America, Aquasport, etc; I find the Montour to be more responsive.

What don't I like - at 6'0, 205 lbs I am pushing the upper size limit on this boat. The Montour has moved on to be my wife's boat and it rides much better in the water at her weight than mine. That said, the cockpit fit me pretty well with little adjustment - again compared to other rec boats I was able to "lock in" much more. One really annoying trait made worse by riding low to the water is the bow wake and general noisiness of the hull. This is not the boat if you dream of silently sneaking up on wildlife, at least not if you plan on doing that with much speed. I also wish the seatback was lower or it was easier to swap out for a backband. Carefully consider your PFD and how it interacts with the seatback. This is a real problem for my wife with her shorter stature.

I've paddled the Montour up and down my local lake, on rivers with Class I and II rapids, through salt marshes, inlets off the Chesapeake Bay and very briefly past the entrance to Murrell's Inlet into the Atlantic - okay, this was inappropriate. The Montour allowed me to experience all of those things, taught me a lot and made me much better prepared for my next boat purchase. Not bad for $349.

by Aquafusion Kayaks
Details
Paddled an Aquafusion Legend that was part of the fleet at Steinhatchee Landing in Florida this past weekend. Paddled a total of approximately 20 miles in two half day paddles. The Legend performed adequately on a variety of conditions - paddled up to the Falls (really a 1.5 foot ledge), carried past and ran back over it also a couple of riffles further down river; also paddled down to the mouth of the Steinhatchee and out into a placid Gulf a few hundred yards. The skeg was busted on this boat and it still tracked very well - a few times some swirly currents kicked the stern out but was easily corrected with a sweep each time. It is what one would expect - okay at many things, master of none. Moderately responsive, decent speed - less drop off paddling upstream than I would have thought. Ferried well. Very large cockpit made it hard even for me (6'0, 205) to really lock in. Significant bow wake and seemed to be a noisy hull design. Decent boat but overall would go with my Perception Montour/Dagger Blackwater for a boat with similar design and purpose. Liberty would be better if you needed an oversized cockpit.