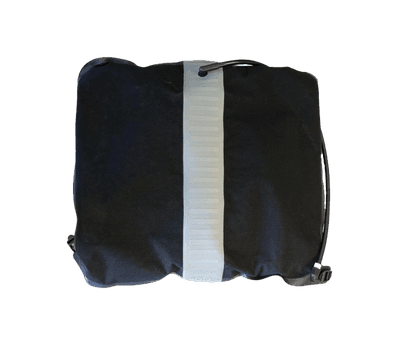 by Jackson Kayak
Details
Just the most comfortable kayak seat I've ever tried. The boat I use it in went from being torture to paddle to the most comfy one in the fleet. Molds itself exactly to your boat and booty. Nice & warm on cold days, too. 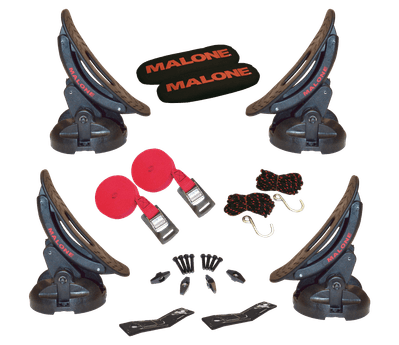 Have design flexibility that fits most any hull on contact. Rear saddles have removable glide socks that fit over the pads, which make solo loading from behind the car very easy. The saddles also pivot sideways, which allows easy loading from the side as well when 2 people load the boat, and the saddles pivot back into place with the hull of the boat as it's loaded on.

Easy to install and maintain, and very solid in use. Saddles don't go flat with use like some saddles do, or not give at all to hull shape like other saddles.

A little noisy when driving with no boat on the car, but that's zero issue when you see how well they work with a kayak.

Like the other posters here, I really like this boat a lot.
My comments are on the 2008 ocean cockpit model, which is a little different from earlier ones. And for reference, I'm 5'7" & 170 lbs.

Appearance is classic - an adaptation of a real Greenland skin boat to western physiques and uses, yet not bloated beyond recognition like so many other commercial kayaks. A good compromise between the old and the new. Looks as sporty as it paddles.

Quality of construction is now on a par with many North American boats, and attention to detail has increased significantly over older models. Shining a light through the layup shows inconsistent thickness or coloring of gelcoat on the bottom of the hull, but it is not obvious looking at the inside or the outside of the boat. I was just glad to see a British kayak that wasn't 90% gelcoat. Fit and finish are very good, and I found no voids or anomalies in the layup.

Skeg slider placement is very intuitive, and works smoothly. Skeg blade is large, and very effective in keeping the boat tracking straight in winds up to 25kt. The boat balances well for a solo carry, and is not heavy - maybe 50 - 52 lbs. Hatches are watertight, and bulkheads do not leak. Deck now has a recess for a 70P compass right in front of the front hatch. And speaking of hatches - THEY ARE ACTUALLY TETHERED TO THE BOAT. I can't count how many VCP, P&H, and NDK owners that I know that have lost hatch covers in the past. A welcome upgrade! Bow and stern toggles also have tethers to keep them on the deck and out of the water while paddling.

Deckline and bungee layout is very logical, and there are more bungees than you need. Recessed fittings are very well finished. Rear deck bungees and hatches aren't optimally laid out for a Greenland storm paddle, but it works. I'd have liked to have seen reflective decklines at this price, but you can't have everything. They're easy and cheap enough to replace anytime I like.

Seat feels high until you try to put your finger between the back of the seat and the hull - it's actually pretty low in the rear - as low as you'd get sitting on a foam seat. This seat isn't for everyone, though. I find it comfortable so far after a month of owning the boat. The backband is so-so, but I'll leave it in for now.

Paddling -- Wow! More maneuverable than any other commercial sea kayak of that length that I've ever paddled, yet easy to keep on course, especially with the skeg. The boat loves rough water & breaking waves, and is reassuring while still being a lot of fun to paddle. It catches waves easily, and surfs with good control characteristics. Turns on a dime in rock gardens, too. Steep waves bigger than 1.5 feet tend to wash on the decks, but I don't mind that. Boat rolls very easily, and is well suited for G-style rolling, sculling, and balance braces. Even hand rolls aren't difficult. I can layback almost to the deck with the stock seat, which makes rolling a breeze. If I scoot forward a little in the seat, I can bang my head on the rear deck.

Top speed isn't great. However, maintaining a normal cruising pace (4 - 4.5 MPH) is easy. I topped out at just over 6 MPH on a GPS when it became more effort than it was worth for any further gain in speed.

Overall, this is an excellent low volume day/play boat for the small to medium paddler that remains fairly true to its Inuit heritage. It's also one of the oldest commercial sea kayaks, which is a testament to it's design.

by Onno
Details
This is a foam-core carbon fiber skeg, and carbon-glass cassette with a foil shape, rather than a flat piece of plastic or metal. Kit comes complete with all necessary parts. 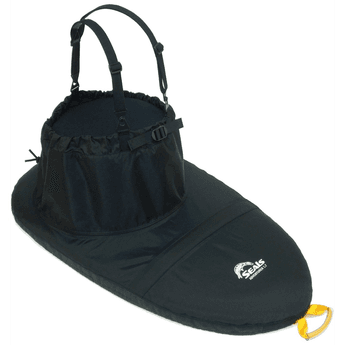 Non-neoprene breathable material with codura reinforcement around the cockpit rim area on top & a rubberized coating on the inside of the rim. This skirt features an implosion bar, large mesh pocket on top, adjustable bungees over the pocket, reflective stripe, and at least 10 attachment loops to clip things like VHF's, or a GPS to.

The forward tip of the inside of the skirt is reinforced with nylon webbing that is part of the grab loop. The grab loop itself has a large rubber handle on it, and is tethered to the bungees, which hold the handle in the same position at all times - a feature I really like, because it makes it all but impossible to attach the skirt to the coaming with the grab loop inside the boat. It also assures you that the handle will always be in the same place no matter what your situation.

There is a paddle park clip near the tunnel on the deck. A bit over the top, IMO, but useful on a windy day if you don't have sufficient deck rigging to park your paddle otherwise. It also takes a bit of learning to use efficiently, but it is secure when closed around a paddle shaft. The tunnel itself is tapered & allows excellent range of motion for rolling and for differing seat positions in various boats. The tunnel also has a rubberized rim and velcro waist adjustment. Heavier paddlers may find it a bit snug, as it took very little adjustment to conform to my 34" waist. Suspenders are included with the skirt, but I found no need for them.

With the skirt mated to a drytop, I found no appreciable leakage after about 10 rolls.

A bit pricey compared to neoprene, but worth it. The utility of the pocket and attachment loops is obvious --- you can keep your radio and emergency gear on your sprayskirt in case of a wet exit, even if you don't have a lot of storage in your PFD. Overall, I like the skirt a lot.

Excellent tracking, almost totally unaffected by wind. No rudder, no skeg, no need for either. A little slow turning, but responds well to a strong lean & sweep stroke. The low overall profile & low rear of the coaming make for easy layback rolls. This boat is very easy to roll anyway you try it. Surfs well, and handles rough water with ease once you get used to the light initial stability. Boat is fast at cruising speed, excellent glide, and top speed is slightly above average. Tends to run over small to medium waves & punch through the tops of larger ones.

Boat is constructed of okoume plywood sheathed in fiberglass. Layup is very stiff & strong. Decks are flat except around cockpit. Small ocean cockpit with wide coaming ridge, which makes attaching sprayskirt very easy. Hull has a few unfaired spots along the chines and keel, but they do not affect handling or performance. Beckson hatches leak slightly, maybe a quarter cup of water after a long rolling session or rough water paddle. Painted hull requires more upkeep than gelcoat, especially if you paddle near rocks or land on rocky beaches.

Overall, an excellent daytripping kayak for someone looking to paddle a hardshell boat that breaks away from the norm of super high volume commercial kayaks, and also for paddlers looking to learn advanced skills and Greenland rolls

by Voyageur Canoe Company Ltd.
Details
Excellent comfort, doesn't slip even on wet royalex, and can be removed and used in every canoe you own (Although this is not intended for whitewater use!). The pad is also very durable, and easy to clean. The pad's 35" width allows the paddler to easily change positions, which glued-in pads do not do well. Well worth the $35 I paid for it.

by Nashwaak Paddles
Details
Very smooth in the water, no flutter. The narrow blade provides plenty of power for acceleration when needed, but this paddle really shines when you don't overpower it, and concentrate on good technique. I switched it back and forth with my old paddle over the course of a day, and the Nashwaak felt far superior by the end of the paddle.

by Old Town Canoe and Kayak
Details
Fast, light, easy to carry....what more can I ask for? The Penobscot paddles well solo sitting, kneeling, and especially well heeled-over slightly Canadian style. Rough water and winds up to 15 knots are no major problem for it. A great all-around canoe.

by Current Designs Kayaks
Details
Have owned one for a year now (No skeg), and it just keeps growing on you. Handles following seas without a problem, loves big swells, and surfs well. Turns really quick when leaned out on its chines, yet still has good tracking. A lot of fun to paddle!