by Wenonah Canoe, Inc.
Details
We wound up with an Ultra-Lite Champlain after we bought it for a wedding gift. A tree fell on it during a winter storm before we could give it away (it also took out a fence, part of a neighbors roof, and crushed one side of a covered steel canoe rack). We had to buy a second Champlain for the Bride and Groom. The groom was a tall powerful Marine (now a tall powerful cop). His tactics are to beat the water into submission. We knew we needed to get a large canoe that would allow him live out his abusive water routines while he and his new wife still got maximum enjoyment out of the canoe. Owning nearly 20 canoes and kayaks, we had a good idea as to what would work and what wouldn't. Now fast forward a few years…

We had our Champlain repaired by Wenonah and, with a couple of small exceptions; it looks like it just came off the sales floor. We jokingly call it "The Beater Canoe" because after the tree hit it, it looked like a beater. In fact now, it's anything but a beater.

My wife and I finally took "our" Champlain out for a proper spin. It was on a large mountain reservoir, just under 5000 feet in the Sierra’s. The trip included the bare necessities and a small dog (see our trip report: California, Union Valley Reservoir). We got a sampling of flat water, choppy water, wind, gusts, mixed currents, bow/quartering/broadside/stern waves (from 0 – 12”), etc. We thought we'd be sorry with such a parachute and no load or spray deck to keep it on task. It handled flawlessly.

This canoe is almost a mind reader. It takes little more than a thought and it responds. Absolutely no surprises and no acute "points of no return". Everything is predictable, manageable, and reliable.

It won't replace either of our Wenonah Itascas. At times it might replace our Spirit II. And it's in a different class than our other crafts. But it won't sit idle when we have friends or family along either. Especially if friends or family require a lot of room and/or a large load… Or if they have some perverse desire to beat the water into submission.

I rate a canoe or kayak by how well it does what it is advertized to do. So I won’t rate a whitewater canoe using touring canoe expectations, or visa versa. That wouldn’t be fair. A perfect 10, means the canoe (at least in my mind) did everything it was advertized to do, and did it exceptionally well. This canoe easily makes the 10 grade, but if we ever get it out into the big stuff I might have to reevaluate.
Have fun and Keep your paddle blades on the bottom half.

by Coleman
Details
I either own or have paddled everything from the Old Town, to the Mad Rivers, to the Clippers, to the aluminum Grummans, to the Home made strippers and fiberglass kits, to the Wenonahs, to the Moore Venom Racer, and a few in between.
My sister gave us her old RAM X-15, and somewhere along the line we picked up a RAM X-17. Both of these were aptly named the "Orange Brick" and the "Big Red Brick". Thought she was doing us a favor giving us the first - she wasn’t really. It was great at times, because we could loan it to anybody and always get it back. We have about 17 canoes and kayaks. The Ram X is the only one that we never had to worry about because nobody could hurt it, and… because nobody wanted to hang onto it. Worse, we had to sit and wait for the darn thing to catch up every time we took people with us. Morning adventures became an all day chore. No fun.

I could see it as a cheap and reliable duck hunting boat if you mount a motor, but then it wouldn’t be canoeing, would it? Highly recommend it for a Boy Scout camp boat on a small pond without wind. I keep hearing "you get what you pay for". In this case, I think you pay much too much for what you get.
Let’s break it down: $300.00 - $400.00 = an uncomfortable outing, broken back, over worked adventures, and a maintenance free yard ornament.

Now I’ve purchased old beat up canoes for under $100.00. Fixed them up for another $100.00, and had them ALL out perform the RAM X hands down. Sure the other canoes require some maintenance (although not much), but then again, I could own a door mat for a lot less and get more use than I would out of a Coleman RAM. We happily got rid of ours. We now let our friends use other canoes we’ve resurrected, and good canoes for the fiends who know how to canoe. I’d rate this backache barge a -5 if it were possible, since I can’t really equate it to a canoe…but alas, I’ll have to settle for a 1…And I’m being nice.

I just think this beast gets way too much praise without enough research backing its appeal. I fear it will lead to well intentioned buyers being suckered into getting one because well meaning novices don’t know any better. 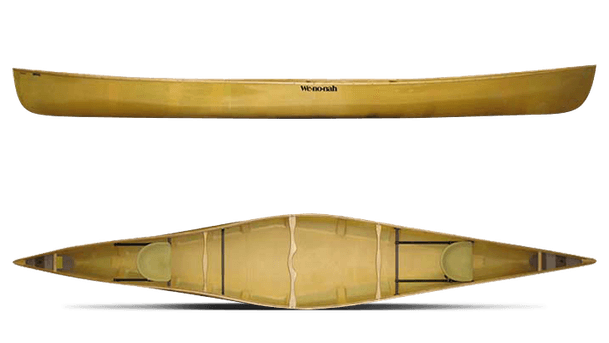 by Wenonah Canoe, Inc.
Details
Thought it was about time to write a review on our Itasca. You know, before the 08 season gets into play. We’ve had it for almost 3 years. We have 16 or 17 canoes & kayaks. We’ve paddled many more. We like wilderness expedition, but rarely get the opportunity. We’ve paddled most western states, & some areas in Canada.

Together my wife & I weigh over 400 lbs, & I stand over 6 feet. My wife, a few inches less. Our kids were raised in the bow of our Moore Venom Racer (nursing while I paddled). We’ve done our minimalist camping, but enjoy good meals & simple frills, so we don’t always pack light. Also, I’m an amateur outdoor photographer, with equipment weighing nearly 100 lbs. on photo ops.

We shopped a long time for our next “Perfect” canoe. It had to have leg room, be big enough for ocean, carry weeks of supplies, track well, and glide like a bird. Eventually we narrowed our search down to 4 different canoes and settled on the Kevlar Flex-Core w/ Gel Coat Itasca. Shortly after, I injured my arm. I was unable to paddle for over a year. I still can’t paddle a double blade, or match the racing strokes I used to love, but as a result, the maiden voyage of the Itasca was more than just a test of my passion…it defined our new canoe.

In high winds, and from the bow, my wife paddled a 9 mi. round trip in one day, & kept up with most of the rest in our group. After I was able to paddle again, we were victims of an intentional swamping prank. We rode quartering waves over 5 ft. from crest to trough & never went over. We did take on a small amount of water & the bow free-fell to the bottom with a slap, but we were still able to assist a flipped kayak suffering the same prank immediately after.

Insight & tips. This is a remarkable canoe. It instantly became our favorite. We ordered it with the Kevlar skid pads. Unlike after market installations, these are installed in the mold prior to laminating. There is NO additional drag. We got sliding/contoured seats, & a rear foot brace. After reading about wind problems, I was going to make a canoe cover. Not possible with my injury, so I called Wenonah. They told me: "Load extra ballast." An old trick we’ve used to trim out canoes for decades. But this required a lot of ballast & was soon abandoned. Our solution was a couple of $35.00 car top bags from Pep Boys. Empty or loaded, these shed the wind like a raincoat to rain, & give us a great & secure way to load the vessel. Speed is unholy for a touring canoe. It will never compete against a true racer, but for a tandem touring canoe it’s heaven.

Maneuvering was supposed to be a problem. After 20+ years in a marathon racer, it was no big deal. We use many of the same strokes the racer needs, & we can turn it on a dime in an instant. And the glide…it has a Gene Jensen glide. Need I say more. To launch, I just shove off & jump in. Initial stability is shamefully similar to a…er…uh…recreational…uh…floatie thing, but the secondary is so good you almost can’t find its limits. Get a light color, it hides the scratches better. Would be nice if Wenonah would offer pre-finished gunwale options for an additional price. It took me weeks to finish ours left handed.

The price was high, but worth it. Are there other great canoes out there? No doubt. So the down side would be this: I’ll probably never have a desire to find out. Feel free to e-mail me if you have any questions. Vern Matthews, keep your bottom wet!

P.S: I rate a canoe or kayak by how well they meet up to their advertised expectations. I won’t rate one based on improper applications (e.g. whitewater use on a recreational canoe, unless it functions well even when not used as intended). So a 10 does an incredible job doing exactly what it was designed to do. If I could, I’d rate this one an 11. I never thought flatwater touring could go to this level!

by Dagger
Details
In defense of the 16.5’ Cortez. We own 6 kayaks and will probably build another. We also own 7 canoes. We like distant travels, open water, secluded waterways, and are getting into coastal adventures. Santa chose this kayak for one of my sons. It needed to be a very fast poly boat with room for camping supplies and a taste for sharp turns that could handle coastal waters and photography from the seat. The “Santa’s” canoe and kayak specialty shop we got this from, tests all of their vessels on the Southern California oceans and lakes. This really made the tree shine.

The Cortez is a specialty performance touring kayak. It was designed to fill a gap in the sport. It’s one of the few rockered touring kayaks, thus making it highly maneuverable when need be, but hard tracking when the ruder is down, or when your skills are up. It’s not intended for the novice or the non-adventurous recreational yaker. My son, almost 6’ and about 180 pounds, pilots this kayak like it was a fighter jet (Note: all of our kids grew up in kayaks and canoes). We’ve spent a fair amount of time in high mountain lakes with all sorts of winds and navigational challenges. Though no long camping trips in this kayak yet, the blasted thing moves just as well loaded as it does running light. I’m about 6’2” and 235 pounds. For me it’s a little uncomfortable. My son can spend hours in it for days on end. It might just be my age showing, but after 45 minutes or so, I’m ready to get out.

For the record, I rate it very high because it does exactly what it is supposed to do, and then some. Also, I recommend this be paddled in the environment it was intended to be used in. I would not expect a Honda Accord to out perform a Humvee off road, and I would not expect the Humvee to get better mileage than the Honda Accord on the highway. If you are (or want to become) a skilled pilot of a high volume, highly maneuverable, hard tracking, poly touring speed demon kayak... this might be for you. Check it out first though. After all, not everybody likes the same pair of shoes.