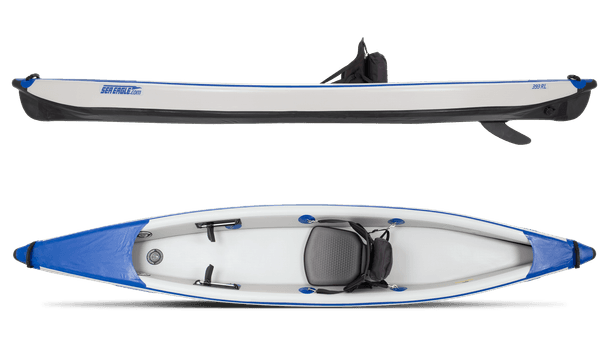 I bought my Razorlite 393rl this past spring, to replace my beloved Eddyline - which had been stolen off the roof of my car. At least if it's inside the vehicle, theft is less likely! The first problem - it was impossible to get the foot supports in. It turned out they were 1/4" longer then spec; once I had them cut down life was much easier. But the first month of paddling was without foot pegs, not impossible but not so comfortable, either. I also found it impossible to come close to folding it tightly enough to fit in the bag, until Sea Eagle pointed me toward their excellent video on how to do it - not at all like the written directions that came with the boat! And most of the places I paddle, I leave the skeg off - it's often shallow, and I've been in places where if I tried to back out, I can see the skeg anchoring me, or catching on branches under the water. It paddles well enough in a straight line without. If I know I'm going to have enough depth, I put it on (if I remember!) as it does track better and I do a lot of photography while on the water.

Early in the season, I deliberately tested how stable it was. It has excellent initial stability; I've never felt close to tipping over in my usual relatively flat conditions on lakes, ponds, flat rivers. But unlike the Eddyline, it has virtually no secondary stability - once you get it so the side is getting wet, you are over. Good to know! I'm not going to take it in real chop unless I am willing to swim!

The seat is too hard for me after about two hours. I use an inflatable seat cushion partly inflated; I'm only about a half inch higher, and it doesn't affect my stability that I can see. And another complaint others have had about no side handles, I solved by using a padded strap from luggage, hooked between the D-rings on one side. Problem solved - although I'm usually with others, and we help each other with carrying.

So those are the shortcomings. But it paddles really well; I have no trouble keeping up with the pack. It's heaven to get my arthritic joints in and out. I've overturned it once overbalancing on entry, and I've done that in most kayaks I've paddled enough times. This season I've been out 30 - 40 times, and while it's not the perfect boat, I'm not sure that exists! 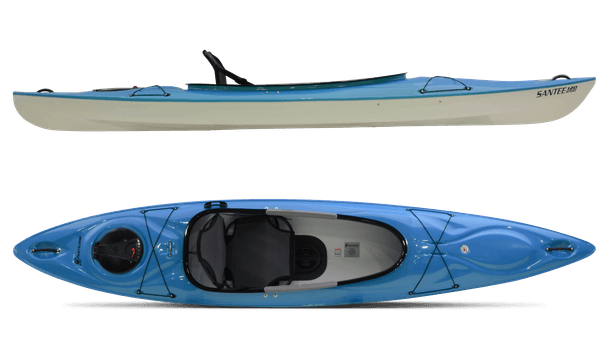 by Hurricane Kayaks
Details
I often paddle a Santee 120 Sport when visiting friends in Virginia; they have two, so I don't always feel I need to bring my own boat. It is relatively light, very stable, easy to move through the water and control, and has an even more generous cockpit than what I need - which is large! One of the things I particularly appreciate is the ease with which one can adjust the foot pegs. It's not my boat - unless I was the last one to paddle, they are always in the wrong place! It handles chop well, and rides the swells with ease on the lower Potomac River. The only thing I can say that is negative is that the lines are not as pretty as my well loved Eddyline Sandpiper. by Perception
Details
The Carolina 14 is my second choice boat, being much more unwieldy than my Eddyline. I've been glad to have it (and the skirt) when in 2' seas and chop, as it's much drier, but I always use the rudder - makes turning so much easier. But my biggest complaint is that both handles have failed. You are supposed to be able to use them to lift and carry it, right? The first one popped off because the locktight bolt hadn't been tightened; the second one because the bungie shredded. There's no excuse for not tightening nuts, and the cord to a handle should be cord, not bungie.
It's light for its size, and the price was reasonable, it does what I need when the water's rougher. 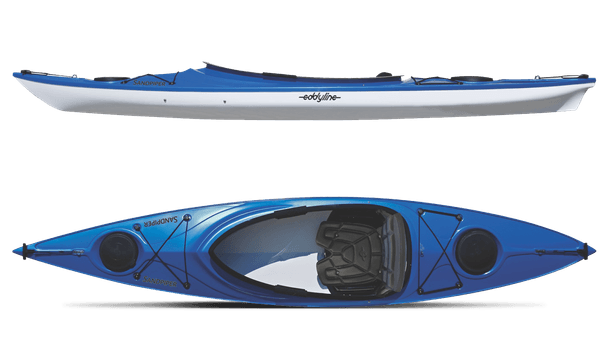 by Eddyline Kayaks
Details
I inherited an old Sandpiper - and although I own two other kayaks, it's my "go to" boat. It's old enough to have no hatches or bulkheads, and it's bounced off enough rocks and scraped over enough gravel banks to have needed repair to the stern keel to stop it leaking. And it's old enough (and light enough!) to have been blown off the top of a car before it was tied down, cracking around about 1/3 of the cockpit coaming - and it's still my "go to" boat. It's been around enough so that the seat back split and has been pop riveted together and it's STILL my "go to" boat. The light weight, maneuverability, comfort, beauty and style mean that when it finally completely falls apart, I'll have to go buy another one, if I can scrape together the money; there are few others out there with the light weight and good looks.