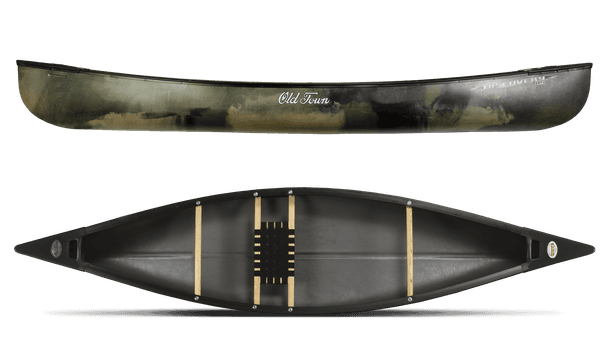 by Old Town Canoe and Kayak
Details
I bought this canoe specifically for using on a small Class I-II creek with lots of gravel bars to hop over. Being an almost exclusive kayaker for the past 15 years, I've found that jumping out of a canoe to pull across a gravel bar, is significantly easier than a kayak, so this is my 3rd try with a canoe.

Tried 14' canoe, and it was just too burdensome to try to turn in fast water, close quarters, etc..so decided this time to try the Discovery 119. First thing is of course that if you're going to use a canoe paddle, you'd better have a solid/comfortable J stroke, and be in no hurry. The side-to-side drift is terrible if you don't, and you certainly won't get anywhere in any significant head-on current. As stated by many here, a proper length, style kayak paddle is almost essential with this boat, or you'll work yourself to death, in wind, and current especially. To it's credit, this canoe did track surprisingly well on a glide on flat water with no wind. Primary stability was also better than I'd hoped considering what I'd heard about these canoes. The secondary stability however is as stated by most, and leaves a lot to be desired. It can be fished out of, but takes some getting used to.

The seat, although reasonably comfortable for the first 1hr., became increasingly uncomfortable after that.

I bought this canoe used, but like new for about half of the new price. I never would have paid the new price knowing what I know now about the canoe, although since I got a great deal on it, I have a place for it specifically for what I bought it for, only to run gravel bar creeks. It seems to have plenty of room for camping out of for a night, or two, and I'm confident that I'll be pleased with it.

I find this canoe better than most, and for the price, it's a real bargain if you can find it at a significantly less used price. I do not recommend this boat for flatwater, unless you're in an almost no wind/sheltered location. Otherwise, it's a nice little boat. I strongly recommend making sure your kayak paddle is of sufficient length, and has drip rings to keep water out of the boat.

Paddles well, is very stable, tracks well, and handles reasonably well.
I don't like the cheap seats, and after only 2 somewhat lengthy river trips the scratches on the bottom resembled more a canoe that had been used for many years. The plastic seems to groove out far more easily than the various other plastic boats I've owned. It was a good value, but I would not recommend this boat if you're going to use a canoe alot.

by Perception
Details
Paddles and tracks fairly well. Weathercocks pretty badly. Is very comfortable to paddle, and fish from, and the tray that is included is really handy. I do like that there are ample rod holders, however I do not understand why the front mounted holder is fixed/locked at only one rotation angle, and was not made to be adjustable locking. It would have been convenient to have had it to where one could lock it in at any spot of 360 degree angle. After paddling for nearly 15 years now, I can say that although I think that this kayak was a good idea/design, it has a couple of severe weak points. My seat broke at the point where the bottom front mounts at the floor almost immediately, and I'm not one who is abusive at all, but take great care with my boats. The bulkhead also leaked from the time it was new. Unfortunately after contacting the store, and also Perception, the hoops that I would have to jump through to get the warranty to fix are far too unreasonable, and they not only didn't appear the least bit interested in my feedback, but actually treated me as though I was bothersome, and trying to get something for nothing, which I never even asked for replacement. I must say I'm a bit taken aback by the attitude at Confluence. Sadly, this seems to be becoming more typical in America today with almost any product. They don't mind taking your money, but the second you have a problem, no matter how legitimate, they treat you like a thorn in their side, patronizing you, and immediately start giving you the runaround. And the ironic thing in this situation is that I didn't even really want my boat replaced, nor fixed. They just immediately, and automatically jumped to the conclusion as soon as I tried to give the feedback/problems I'd had. I knew that if I got another new one, it would probably be the exact same problems, and I knew that I could fix this boat probably better than they ever would anyway, so I had no intention of even asking for that.

Simply put, I cannot recommend this kayak due to it's design, and/or manufacturing flaws, and more importantly, the companies lack of concern, and unwillingness to even listen to the problems, much less offer to take care of it. It's fair to point out that I merely called Perception to give them feedback so that it might help them fix these design weaknesses in future boats, yet the people as Confluence immediately went into what I refer to as "defense mode" the moment I mentioned a "problem with my kayak". I feel people have a right to know how a company operates AFTER the purchase of a kayak, so I'm trying to be part of the solution by stating it here for all who care to know. I would have given this boat at least a 7, or possibly an 8 if the seat had not broken, the bulkhead had not been defective, and the company showed more concern/professionalism for it's product.

I will keep the boat, and will fix these problems myself. Needless to say, had I known all this before hand, (which is why I'm reporting the first review of this kayak here) I certainly wouldn't have bought it at the (what I consider to be) "premium price" it sells for. I'm hoping this will help someone else with making a decision of what they want/need. I truly wish I could have given a more positive review of this boat. Hopefully, Confluence will get it together, and realize that "our satisfaction" will be key to their success.

by Mainstream Kayaks
Details
Decent boat, and I think it was a potentially good design. Seats breaking appear to be a common weak spot, and bulkheads leak. It fishes well, paddles fairly well, and I hated to hear that they've had to discontinue these boats so soon after releasing them, but I thought it would be good to give the first review of them just in case someone found themselves considering purchasing a used one.

If willing to replace the seat if/when it breaks with some king of aftermarket one, etc...might be worth buying if you can get a used one at a cheap price. Otherwise, I can't say I'd recommend them.

FYI: The weakest point of my seat was where it attached to the inside bottom of the kayak. The bulkhead really needs to be stripped, and resealed with quality marine caulk. Would've given this kayak a rate of 7 if it hadn't been for the common problems. Local major store has several returned with these problems.

by Prijon Kayaks
Details
I bought my Seayak about 7 years ago. After paddling this kayak literally thousands of miles, and putting it through the wringer I am sold on this boat. I liked it so much, that I bought a second one just to have in case. I haven't had the problems with tracking, weathercocking, etc...that I've seen listed here. My seayak do have rudders for the same reason a car has power steering. They are simply more efficient. Without the rudder, the kayak does not track worse than any other seakayak I've paddled. In fact, it tracks far better. I find the Seayak very comfortable in every way. As though it's an extention of my body to the water. The first 3-4 years I had the Seayak, I was paddling around 40-50 miles 3 days a week. I would stop only a few minutes to have lunch, and a couple of 10 minute breaks only to stretch my legs occassionally. I've paddled the Seayak in every environment there is. From Below 0 temps, in icebergs, to well above 100 degree tropical heat, in ocean swells exceeding 15 feet from the trough, in severe gales, through thunderstorms, etc...I even was caught by a tornado once on a lake, and was forced to the shore by 80 mile per hour gusts. I finally found shelter, and left the kayak about 80 feet above the breaking waves on shore, and when I went back to retreive it later it was gone. I finally found it buried vertically in a tree, with the bow upwards, and the stern 10 feet off the ground. I looked the boat over throughly when I got home from this trip, and never found so much as a scratch from the incident. I've paddled the Seayak full force out of heavy surf onto the most jagged, rockiest shores imaginable with nothing more than a few minor scratches. There is no way a composite boat could hold up to this kind of punishment. I've owned many plastic kayaks, and canoes. Nothing holds up like the HTP that the Prijon kayaks use. Not even close. I've entertained at times, getting composite boats, but I've yet to find a need, and have many reasons why not to. I've paddled many composite boats, and don't see any significant advantages other than weight in carrying one to/from the water, or portaging. Still I have no problem with the weight. If I were a smaller, weaker person maybe that would be a factor. The only time I've seen any problem with "oilcanning" is when the straps are to tightly adjusted which seems to be a common problem I see with paddlers today. I can't tell you how many composite boats I've seen busted from overtightening, and how many plastic boats I've seen going down the road with straps adjusted so tight they could almost hold an elephant on top of the car/truck/SUV. Plastic bends. That's the nature of what makes it tough. The true value is in whether is warps or not, and the Seayak doesn't. I've had mine strapped to my rack for days in over 100 degree heat, and when I get to where I'm going, the little flex that is there comes out immediately without any loss of strength in the plastic at all. Each to their own, but I'd take function over vanity any day of the week. There's no way ANY composite boat whatsoever can hold up to what I've put this Seayak through, and it does everything I need it to do otherwise. If I were given the opportunity to trade my Seayak for ANY other kayak in the world I wanted on the basis that I was forced to keep it instead of selling it, or the like, I'd gladly decline that offer without a second thought. I am that satisfied with it. As I said. Each to their own, but I am under the belief that "the proof is in the pudding", and not in how pretty it is, or how much one pays for it.