by Cape Falcon Kayaks
Details
I built an SC-1 at Cape Falcon in summer 2007 - it's the design precursor to the F-1, and is an authorized skin-on-frame version of the Mariner Coaster. The F-1 is quite similar, although it has been further optimized for better behavior while surfing, and may be a bit faster, and is a bit narrower. From what I've read over at Qajaq USA, the boats behave very much the same. You could also read reviews of the Coaster for more feedback.

After paddling the SC-1 for three seasons, it is still my favorite boat. It is short, but not slow. The maneuverability is good, as you would expect - the skeg profile of the stern aids straight-line tracking while the pronounced chines (from the cockpit aft) allow the boat to carve lean turns fairly automatically. The forward part of the hull is narrow and Swede-form below the waterline, in spite of the blunt appearance of the bow. The wetted surface area is very low, so overall, the drag is surprisingly low - glide is impressive to everyone who has paddled it. I've loaned the boat to many people, and in particular women find the boat comfortable and easy to drive. I am not small, however, and I like it fine. I believe Brian tailors the F-1 to the paddler, which is a bonus.

My boat is 13'9" with a beam of about 23.5", and is quite stable at rest. For whatever reason, the boat is also comfortable in confused seas. This is the real merit of this boat for me, as I paddle in L.I. Sound and the Hudson, both of which are prone to swirling currents and really big boat wakes.

The max width occurs behind the cockpit so the hull does not really interfere with the paddle stroke, unusual for a short boat. The peaked fore deck is pretty high, which is nice for shedding waves and gives some space up front. The steep angle of the deck keeps the sheer away from your knuckles.

For me, the front of the cockpit is a little low and I may modify it someday. Some of my problem may be my seat - I have bought a new seat (Bumfortable), but it's not installed yet. However, I am an anomaly - most people with a sea kayak background find the cockpit roomy and prefer the normal pad seat.

In the end, I think the only thing you give up in a boat like this is some top-end speed. For me, this is not an issue, as I have little ambition to go fast. If I do, I paddle my Struer. Brian is a very talented designer, and the F-1 represents a significant amount of experience and experimentation to generate an advanced hull. The fact that it is hand-made may hide that to a certain extent, but don't be fooled. This boat is being made and enjoyed all over the world by better kayakers than me. In my opinion, it is the perfect answer to those who think a capable sea kayak has to be at least 17' long - it just isn't true.

Finally, no one should be dismayed by SOF construction, it is quite tough. Get a set of Spirit Line float bags and you'll be fine. I've paddled myself at flank speed up onto a rock in the middle of a reservoir in NJ, and had to knuckle-walk myself off. I only scratched the finish - no tears. Oyster shells haven't been a problem, but I'm careful around them. The only thing that scares me is hidden rebar at the shoreline, but that could hole a glass boat, for that matter. I give this boat a 10 out of 10 because it's everything it claims to be, plus I made it myself and why wouldn't I like it?

by KayakPro USA LLC
Details
I posted this on a thread, and realized it is basically a review, so this is an update to my earlier review below (07-11-2006).
I've been using an EZ-Vee Plus for two years now with no problems. I bought it because one of my boats has no attachment points for front and rear tie-downs. From May - September, it sees continuous use, at least 3 times per week.

The Mini factory bars remove completely in a couple minutes. I leave the EZ-Vee attached to the factory bars permanently, so the whole thing lifts off in one piece, which is very nice. I had to make custom attachments to mount it on the factory bars, which was not too hard.

If you had to remove the EZ-Vee from the bars, it would take a while as others have noted - there are 8 big Allen screws holding the EZ-Vee to the bars.

The bungee issue is a non-issue - people talk as if you are required to use the bungees, which is silly. You don't have to use them if they make you nervous, and in my case they are a backup system to normal straps. This should not keep anyone from using the system.

Hull damage - hasn't happened yet. I have added pool noodles over the straight mounting bars and strapped them in place with zip ties, and replace them when they get worn. This seems to solve the issue of stress concentration.

In addition, the EZ-Vee itself acts as a suspension, reducing stress on the hull. The boat is attached to the ends of the carrier which are 8' apart. The carrier is connected to the factory bars which are about 3' apart. When the car bounces around, the whole rack system can flex up and down an inch or two, absorbing a lot of the vibration. For saddles that are connected directly to crossbars, that vibration is carried directly to the boat. Also, the Vee parts are movable, so you can set them at the bulkheads if you like (I don't bother).

I like the system (obviously) and will be adding a second one to the Mini this spring. It's pricey, but the fact that Thule has copied it (not very well, by the looks of it) should tell you that the idea is good.

OK, sales pitch over - and no, I don't work for Gray, but he is a nice guy to deal with.
Cheers, Carl 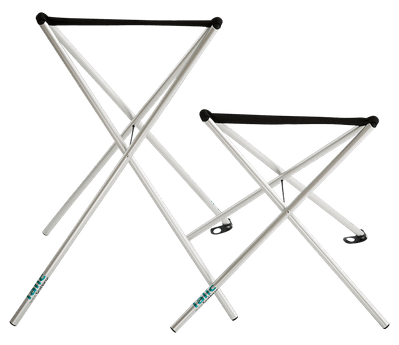 by Talic Storage Systems
Details
Bit the bullet and bought these and am glad I did. I have a wood flat water boat with understern rudder, and like to keep it off the ground as much as possible. I use it as a wash stand and also to work on the boat, installing float bags, fiddling with the footboard and rudder, etc. The 31" units get the boat up to ironing board height. When folded up the unit is around 39" long which may be an issue for small cars - I can't fit mine in the boot of my Mini. I thought about getting the shorter ones, but decided to save my back and just tuck the long ones behind the seat with my paddle. 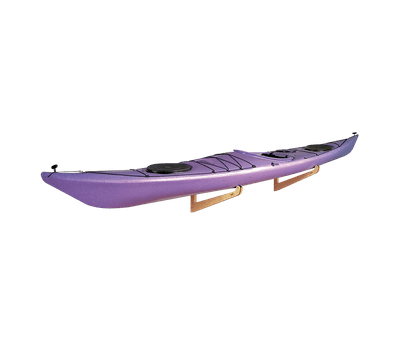 by Talic Storage Systems
Details
I was going to build my own rack, but the Talic design looked like a better version of my idea, so I decided to buy it instead. I've been using a single unit for several months now and am happy with it. I have it supported on bare 2x3 studs on edge in front of a brick wall - it's a rental garage, so I couldn't drill into the brick. It's not obvious from the website, but the arms rotate about the fastener that holds them to the wall mount. Because of this, the bare studs allow the arms to be raised to the vertical position when there's no boat on the rack - a good feature for me as the rack is mounted at head-height to clear the roof of my car. The only thing I would change is that the ends of the arms are bare plywood, and you can scratch a delicate boat if you don't lift it over them - I added a little foam padding there.

by KayakPro USA LLC
Details
I bought the EZ-Vee Plus so I could carry my gorgeous 17' wooden kayak on my 12' Mini Cooper. I specifically did not want to drill holes in the mahogany hull to add front and rear lash points. The EZ-Vee allows me to set my boat on the carrier, lash it with two heavy bungees and that's it - about a 10 second tie down, with no bow or stern straps needed. I've driven 7 hours to VA and 10 hours to Maine from NYC with no issues whatsoever. I'm a mechanical engineer, and will say that the heavy duty aluminum extrusions, welded joints and large fasteners are very well done. The carrier is made to fit either Thule or Yakima, but I adapted it (fairly simply) to fit on my factory Mini rack (I can email photos to the curious or disbelieving). It was a little expensive, but I have no regrets due to its strength and the rapid loading - at the end of a long cold paddle in the rain, it's nice to have the boat loaded in under a minute. I generally use a Lasso Lock in combination with the bungees for theft protection and as a fail-safe, but it hasn't been needed. In fact, I get as many questions about the EZ-Vee as I do about my Struer flat water boat. Comes in different lengths based on hull type - highly recommended. 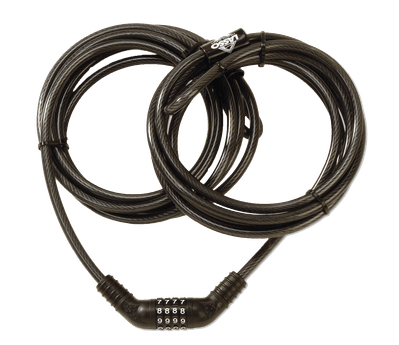 by Lasso Security Cables
Details
Very nice locking method. Two piece cable has a loop on each piece to go over the ends of the kayak - then you snake the rest of the cables around your rack and plug the halves of the combination lock together. The cable is very flexible and has a soft vinyl coating - hasn't marred my wood boat yet. Coils up fairly small (8-10") and goes in its own stuff sack, very nice. Combination lock looks fairly secure, and is easy to use with cold wet hands. I also like the idea of a fail-safe line on my really nice boat. IMO better than other methods I've seen.