For starters, let’s acknowledge that the Mariner fan club tends to cheer any boat designed by the Broze Brothers. To hear them tell it, these boats are an evolutionary step beyond other designs. The Express is a very decent boat, but it’s by no means the pinnacle of kayak evolution.

Let’s start with the good. First off, Mariner construction is excellent. The boat is strong where it really counts (solid end pours, beefy seams), but light enough to carry. Second, a lot of thought has gone into the hull to balance several characteristics: maneuverability, tracking, speed, surfability. The result is that the Express is pretty darn good in all four areas, which is an impressive design achievement. Third, because of its short length and high volume bow/stern, the Express is a good boat to have in confused waters. Fourth, all that volume also translates into lots of space for gear for trips.

Now the less than good parts. The Broze Bros felt that hatches and bulkheads were leak-prone, heavy, and totally unnecessary, so they built their boats without them. The entire kayak industry felt differently, with the Brit builders in particular demonstrating beyond a shadow of a doubt that bulkheads can be made strong and hatches can be made waterproof, and expedition paddlers the world over showing their preference for such hatches. In short, the Mariner position, while exotic, is an evolutionary dead end. Having tripped out of an Express for several years, I can’t tell you how big a hassle it was to have no hatches. That, plus the need to use a seasock for safety, drove me crazy.

Another Boze design philosophy was their condemnation of skegs and rudders. Again, they considered them failure-prone and unnecessary. And again, the entire industry moved in a different direction. I’ve had my share of jammed skegs or rudders that won’t deploy fully, but I’ve also spent enough time tripping in big winds or confused waters where either a rudder or skeg saved me from fatigue and frustration. With its blunt stern, the Express could easily take a rudder, and due to its cockpit placement, there are occasions when it could definitely use one (see below).

There are other drawbacks to the boat. The high rear deck impedes layback rolls. The cockpit might have been large for its time, but compared to modern boats it’s a bit short. This means that people with 32” inseam or longer will have to contort themselves when getting in and out. Finally, in high winds (30 knots) this boat will leecock, which is no good at all, requiring the paddler to load the bow heavy. That wouldn’t be a huge problem in a boat with a front hatch...except this boat doesn’t have one. A rudder would solve this problem too...

So while the Express was a classic of its time, it needs a fresh look. Adding bulkheads and rubber hatches would be a vast improvement. Adding a rudder would make this a very complete all-rounder. 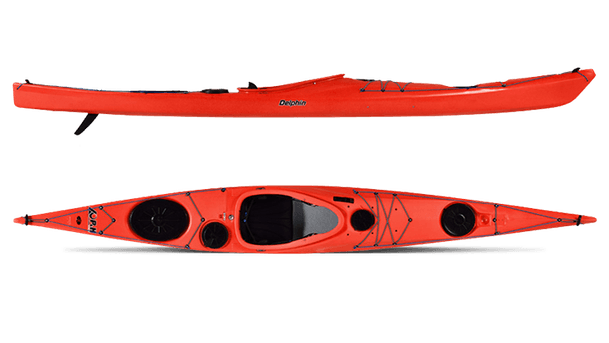 I have had the Delphin out in surf, tide races, and strong winds (30 knots). It is an excellent boat for those conditions: stable, maneuverable, relatively wind neutral. I like the cockpit for my long legs and I like the outfitting for contact with the boat.

I’ve also tripped out of the Delphin from class 2 river to open coast. My longest was 10 days on the west coast of Vancouver Island. On that trip, I packed very light and resigned myself to the Delphin’s slow speed. What I got in return was a boat that was easy to launch/land in surf and handled rough, exposed conditions well.

So it’s a great little boat. Now for the downsides. First, it is a complete beast to carry. Heavy and awkwardly balanced. Second, the day hatch is a leaker. Finally, that flat hull will oilcan. I don’t know if that affects performance much - it can’t get much slower! 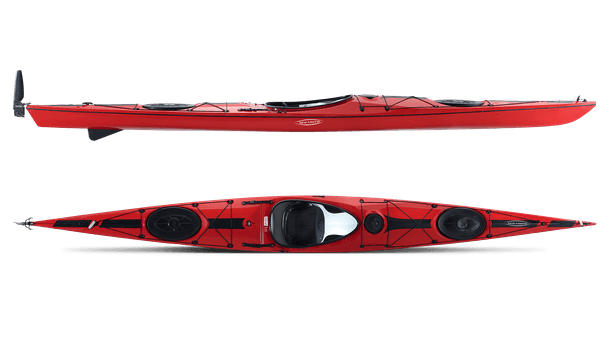 The low rating is for the stock version of the boat. The glass layup of my boat was thin and weak, causing undue flexing in the stern hatch when loaded. The coaming separated from the deck during a cowboy scramble. The glass seat cracked and rubbed partly through the glass of the hull below it. The end pours seem shoddy so I am reluctant to drill holes for a robust grab handle. The bayonet pin rudder assembly broke so that the entire assembly would fall out when the boat was capsized. The local rep said that it would not be a “fun” fix. Finally, I cracked the Smart Trek footpeg plate by pushing hard when trying to catch a wave.

So I did some repairs: kevlar reinforcement in the back hatch; carbon reinforcement of the coaming; glass patches under the seat; new foam seat, hip pads, and thigh pads; ditched the entire rudder assembly/footpegs and replaced it with a foam footplate against the bulkhead; glass keel strip and reinforcement on the bulkheads. The boat is heavier, but structurally sound.

With all the mods done the boat is an 8/10, 9/10 when I’m in a good mood. The stability profile is fun: a little tender on primary, very solid on secondary. Excellent roller. Maneuverable on edge. The low profile bow/stern mean that it is reasonably wind neutral for a 17.5’ boat. Storage is generous and the glove box is large enough for all sorts of day paddling goodies. The skeg is solid and all that I need (I am not a fun of the European rudder/skeg combo). And the hull is fast. The only drawback is that the bow plunges due to its very low volume, but that is a tradeoff for the low windage.

So, yes, I’m now very happy with the boat. But that is after a lot of work. 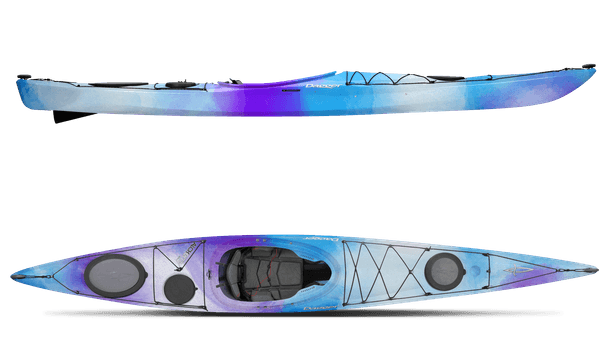 by Dagger
Details
I love the concept behind the Alchemy: a short, plastic, rockered day-touring and ocean play boat that is easy on the budget. I have used an S version in ocean surf, tidal races, rock gardening, and for teaching (it is the boat I put my students in since it handles so easily both on land and on water).

What I like about its outfitting:
The seat and thigh braces are excellent and provide lots of good contact. The footpegs are super easy to adjust from the cockpit (just lift and slide) and have not popped on me in rough water. The foam pillar and keel stiffener keep the cockpit structurally sound.

What I like about its performance:
The rocker makes it easy to spin. Stability is predictable and reassuring in confused water. The short length is very handy in rocks, caves, slots, etc. Despite its maneuverability, I find it quite neutral in the wind and a pretty solid tracker, even with the skeg up. Compared with a Delphin or Elias, for example, it's much less squirrelly. It also doesn’t feel slow, though obviously it's maximum hull speed is limited by its length. That said, I don't feel a struggle to keep up with others on a day paddle. And on land it's an easy carry (short, not too heavy).

What I don't like:
The rear hatch leaks on most Alchemy's I've seen. After a rolling session, expect 2 litres or so in the hatch. The front hatch leaks slightly and the day hatch is dry. The skeg is compromised by a wire slider and several Alchemy's I've seen have kinked skegs. I hope the newer boats have a metal rod slider. Finally, I've compared two Alchemy's side by side and noticed considerable difference in the rocker profile, so they're not coming out of the factory uniform in shape.

In short, the concept is awesome, but the application needs some improvement. Still, for the price this little boat is attractive and can suit the needs of a beginning kayaker or a more experienced rough water paddler. Again, I paddle the S version. I am just over 6', 170 lbs, with a shoe size of 10.

by Mysterioso
Details
The cat's meow. The bee's knees. I could go on, but you get the point. I have rarely been as impressed by a piece of gear as I have been by my Mysterioso M-tech TLS Longsleeve shirt. I wanted something for summer paddling when a drytop is too warm but the wind can still chill. I wore the Mysterioso on a 10 day trip and was amazed at how comfortable it was: warm enough without being too hot, quick drying and -- bonus! -- relatively scent-free at the end of the trip.

by Prijon Kayaks
Details
Ignore the 10 at the bottom of this review - it doesn't mean much. Here are some numbers that might be more useful: I am 6'1", 165 lbs, shoe size 10, 12 years paddling experience on Georgia Strait, BC. I've had the Kodiak for a year and put a couple hundred nautical miles on it, mostly day trips but also a 9 day trip.

The Kodiak is a big, fast gear hauler, suitable for going from point A to B. It is not playful, but it handles loads and rough water well. It is rudder dependent in wind. The rudder pegs are the gas-pedal type and work well. The neo + plastic hatch covers are very water-tight and absolutely cavernous: lots of room to swallow gear. The boat rolls fine if you pad out the cockpit with foam.

by Folbot
Details
The Greenland II is a tough, lightweight folding double that has the capacity for extended tripping. I have owned mine for 2 years and have used it on a number of saltwater trips here in BC, ranging from 3 to 7 days, and I have plans to push it to longer trips as soon as I get the time.

I bought the GII after using a friend's Klepper double and realizing that folding boats had some real advantages: the ability to store them in a closet being a big one. The things that sold me on the GII: it is very light for a double, it assembles easily and in reasonable time (25 mins solo), it is priced lower than the competition, and it comes with a lifetime warrantee. Those things still impress me, especially the customer support offered by Folbot, a company that is truly customer-oriented. No kidding -- these people want you to be happy with their product.

Now that I've paddled the boat for a couple of years, some other things impress me. First, the boat is very easy to load/unload for tripping and it swallows a ton of gear, thanks in large part to its deck zippers. In this respect, it behaves more like a canoe than a kayak. Second, the boat loves the rough water, handling chop, swells, and rebounding waves with aplomb. It's not a boat for major surf, but it will ride out breaking waves in comfort and give you confidence on those exposed crossings. Finally, it's tough. I think this boat will last as long as my friend's 20-year old Klepper.

Downside? It's slower than a skinny composite double. I travel at about 3 knots in good conditions. All in all, the boat is a workhorse, well suited to wilderness travel with lots of gear.