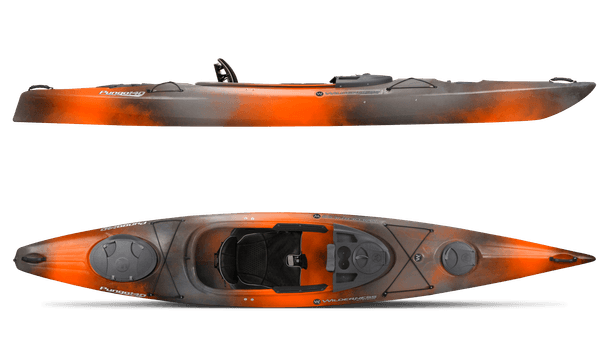 NOT EVERY UPGRADE IS AN IMPROVEMENT! I recently purchased a Pungo 140 and…

NOT EVERY UPGRADE IS AN IMPROVEMENT!
I recently purchased a Pungo 140 and have had it out on the water quite a few times for long excursions. I used it on 4 different lakes in various conditions & I usually paddle from 3 to 5 hours at a clip, sometimes longer.

I own 3 WS kayaks... a Pungo 100, a Tsunami 145 & now the Pungo 140. I'm a huge fan of WS & have always sung their praises due to their great design & quality build. I've been one of their biggest "unpaid salespersons" & have steered many people to their kayaks. However, for the first time I am disappointed with WS, specifically with the Pungo 140.

Overall, it's a good recreational kayak that can definitely be used for touring. It tracks nicely in a straight line & continues to glide after you stop paddling. It's roomy & very easy to get in & out of. Although it is no speed demon, with proper technique & form, you can have the 140 moving at a brisk pace, especially after you have a good rhythm going. Beginners as well as seasoned flat water kayakers will enjoy this boat. Because of the roominess, it's great for having a child or your favorite pooch sitting up front! The extra volume swallows up coolers, dry bags, etc.

WS "upgraded" the Phase 3 seating to the Phase 3 Air Pro seats. In some ways, it is a welcome improvement. The seating offers more support & is noticeably more comfortable for longer outings. The plastic rivets that affixed the seat cushion are no more. On my Pungo 100 & Tsunami, I've had to replace the seating after the rivets either came loose or the material ripped loose around the rivets. So I was pleased to see that change.

The major problem I have with it is the adjustability of the backrest. WS replaced the simple, single strap that went across the back of the seat with a two strap system that winds in & out to offer adjustability from the front of your seat. The idea was nice, but the design is flawed. The old system on my other 2 boats is incredibly easy to adjust on the fly. You can tug the one ring on the strap & it holds your desired position no matter how hard you lean back. It just as easily loosens when you want to recline the backrest & go into lounge mode for resting & or eating your lunch without having to get out of your boat.

The new system has 2 long straps winding through several contact areas, leading towards the front of the seat. I prefer a more upright seating position when paddling. The upright posture promotes better form & more powerful strokes, and prevents fatigue & lower back pain. I get more support & power when I have the backrest in a slightly more aggressive, leaning forward position. Unfortunately, this cannot be achieved with the new AirPro backrest. No matter how hard I tug & pull on the straps, I cannot acquire the same posture I can with my other two boats. The Air Pro seat lends itself to a more loungy position which detracts from having a smoother, more powerful stroke.

Once I have yanked the daylights out of the straps & have the backrest forward as much as humanly possible, I dare not touch or adjust them in any way while on the water, since its so difficult to get it right again. Even then, after awhile on the water, the seat ever so slowly, starts to recline on it's own. It doesn't hold firmly like the previous design. I'm only 5'9, 175 lbs, so it's not like I have a huge amount of weight pushing back on the backrest.

I spoke to a WS rep & asked if I could speak to someone in their Research & Development department to get advice on how I could remedy this problem and make suggestions for future designs. The rep told me they have R & D people, but they are not set up to take calls from consumers. I was baffled by this. If I were running a company like Confluence (they make WS & other brand kayaks) I would have a hotline directly from the end user to the R & D people. After all, isn't that what should matter the most... what the end user thinks about a product? My pleas fell on deaf ears & the rep simply reiterated several times that he's never had a problem with the Air Pro 3 Seating. I even offered to pay to have them install the previous style backrest strap. (He stated they couldn't do that). He suggested I take the boat to where I purchased it & have them look at it.

My observation is that this is an issue of over shooting with the design & making the "new & improved" seating less efficient.
Oh well. I'm left with having to drill holes & attempt to replicate the old strap system for the backrest. I hope that WS reads this & adheres to the idea that sometimes less is more. Keep it simple. And really take an interest in what a consumer has to say about one of their products that they just dropped a thousand dollars on!

I love Wilderness Systems boats (at least the previous ones), but because of the above, I do not recommend the 140 or the Airpro seating system. (unless you enjoy LazyBoy seating or you're ready to make some alterations to the design)