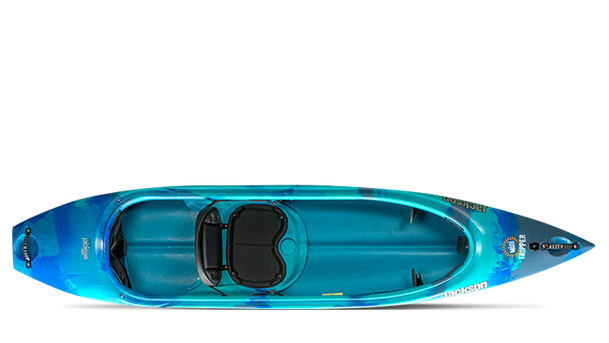 by Jackson Kayak
Details
First, ignore my number rating. I gave the boat a 9 because it has no obvious flaws, has decent quality, and does what it is supposed to do.

Now my review...
I bought this kayak used for my 8 year old daughter. She has been riding in our tandem canoe with me, or with her mom in a kayak since she was 4 years old. It was time for her own boat.

There aren't too many options for kids out there, and we narrowed our choices to the Perception Acadia Scout, Carolina XS, Wilderness Tsunami SP, or the Jackson Mini-Tripper. I settled on the MT because it had a reasonable price and an open cockpit. She likes it that she can carry her own stuff in it. Granted, the open cockpit makes this boat only suitable for calm water, but I wasn't planning on taking my daughter into much moving water anyway. In my mind, it is a bit safer in case of capsize for the cockpit to be easier to exit.

My daughter seems to like the boat a lot. She's been in it twice. The first trip was only about an hour, and she had a hard time making it track. However, the second trip was for 4 hours, and by the end of it, she was handling the boat well. I think it tracks decently for a 9 foot boat, and at 23" wide, it is surprisingly quick.

Observing my daughter in the boat, she never seemed "tippy", and she never complained of feeling unstable. She hopped in and started paddling.

My verdict:
This is a fine starter boat for a child. In a few years she'll move up to something more advanced, and her younger sisters will learn in the Mini-Tripper.

by Heritage Kayaks
Details
I don't own a Featherlite 12, but my father-in-law does. I've paddled it on two occasions. The first when I was a new paddler. All I did was turn in circles. The second time, I was a much more experienced paddler having paddling many miles in several different boats. I concur with the previous reviews. This boat will not track. There is a design or manufacturing flaw with this boat. Hands down, this is the worst boat I've ever paddled. When we travel to my in-laws home, I'll rent a kayak before I'll paddle this thing. by Ocean Kayak
Details
I purchased my 2006 Prowler 13 angler used in 2008. Since then, I've had the boat in just about every kind of water: slow rivers, lakes, whitewater, and ocean surf. I really like this boat. It is very stable, tracks well, and also turns easily.

Speed: At 13'4", I can outpace just about any rec kayak, including a paddling buddy's Pungo 120. When kayaking with friends in their 14 ft touring boats, I can keep pace, but I do work harder. However, in a sprint, the Prowler plows water quickly, and touring boats pull away easily. It is quick enough, but not fast.

Tracking/Maneuverability: Small streams have never been a problem, and I don't see the point of a rudder except under very demanding conditions.

Stability: I've had this boat in ocean surf and whitewater up to class III. It handles Class I-II with absolutely no problems. It is maneuverable enough to be a decent river runner, but it isn't a whitewater boat. In class III without thigh straps, I got dumped in a hurry. With them, you can surf it. However, the length makes all of this challenging. In normal conditions like handling larger boat wake, punching through surf, or river running, you won't get dumped unless you're just not paying attention. The Prowler is rock solid.

Capacity: One reason I bought the Prowler was capacity. I’m about 6'2", and at the time of purchase, I was 310 lbs. My weight made it a wet ride with the foot wells and seat being almost completely full with water. Now I'm 225, and the ride is much drier. Without scupper plugs, there is about an inch of water in the foot wells. Now, my 6 year old daughter will ride in the tankwell with no problems whatsoever.

Convenience: People tend to either love or hate SOT's. To me, you can't beat the ease of use. On a hot day, the ability to take a quick swim and climb back on is a real plus. If you do capsize, just flip it over and get back on. No problem.

Dislike: The 6" screw-in hatch is a PAIN. It has always been difficult to open and close, and now something appears to be warped, and I can't get the thing on at all. I'm replacing the hatch with a twist lock style hatch. Also, my boat has holes in two of the scuppers. A little Lexel caulk took care of it, but it does make me wonder a little about OK's build quality. Also, the angler addition is heavy, about 60 lbs. However, one person can car top it.

Bottom line: You can do a little of everything very easily with this boat, but don't expect to win any races. The Prowler 13 is a great all around kayak. I sometimes think about selling it to get a faster touring SINK, but then I think about the versatility that I'd be giving up, and I always decide to keep it.