In the mid-seventies, I shared an afternoon with the famous woodsman, Calvin Rutstrum, whose flagship book, The New Way of the Wilderness, inspired my love of wilderness travel. I was heading north to Canada and had an 18-1/2 foot Kevlar Sawyer Charger (a then, state-of-the art whitewater racing canoe) on my car. I thought it was the ultimate tripping canoe. Rutstrum walked slowly around the canoe, critically peering at it from every angle. Then, he stepped away and said:  "Well, it's big enough. But, frankly, I wouldn't take anything but an aluminum canoe beyond the trailhead."

I protested weakly, proposing that Kevlar would soon replace aluminum. At this, Rutsrum turned and faced me squarely.  "Cliff, if there was a better way of doing things, don't you think I'd be doing them that way?"

Novices often perceive experts like Rutstrum as highly opinionated. But experienced trippers know that small errors can cause big problems. Here are some "little things" that can make or break a trip. 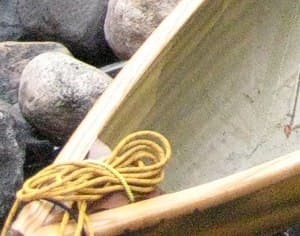 Lines coiled and ready You're paddling stern, sneaking along the edge of a dicey rapid, when a strainer suddenly appears. You pry the tail towards shore and back-paddle (backferry) furiously. As the stern runs aground, you jump out, pull the end of the coiled stern line and snub the canoe to shore. Thank goodness the rope reeled out perfectly.

Store your map before canoeing rapids

Map cases that are tied to thwarts or secured under loops of shockcord on thwarts can be ripped loose and lost in a capsize. Put your map in a secure place (e.g. inside a zippered thwart bag, etc.) before you start down a foamy rapid.

Clean the seals on waterproof boxes

Watertight boxes like those made by Pelican® and Otter® are reliable only if the seals are kept clean and free of debris. Inspect seals each time you open the box-use a wet cotton bandanna to remove trapped particles. Lubricate the seals with silicone at least once a year.

Bring twice as many stakes as your tent needs

Use the extra stakes to anchor stormlines when the wind blows up. Double-stake troublesome spots-two stakes through one hole, each at a different angle. My favorite tent stakes are 12-inch long aluminum, arrowshaft stakes. These hold rock solid on sand, gravel and tundra. Available from Cooke Custom Sewing.

When a storm blows up you may have just minutes to secure your camp. I carry 200 feet of parachute cord that has been pre-cut into 20-foot lengths. Adjusting cords during a storm--and removing them afterwards--is easy if you end your knots with a slippery (quick-release) loop. 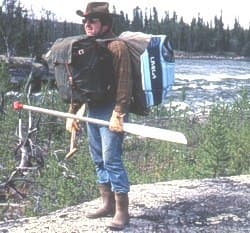 Bring a hard case for each pair of eye glasses

It should have a lanyard or carabiner hole so you can tether it to a pack. Tighten eye-glass screws before you leave home. The tiny Leatherman® Micra has a small screwdriver that fits eye glasses perfectly.

Do NOT carry packs on your chest!

Falls follow if you can't see your feet! Use a tumpline if you must double-pack.