Okay. It's time to admit it. You're a parent now. You're life is different. It's changed dramatically actually. And you're friends were right when they told you that the days of high-energy and adventurous camp outings are gone, or at least put on hold.

What many friends fail to tell you, however, is that camping trips with children are actually better then the ones prior to family life. They may not give you as much freedom as you once had, but they certainly are far more memorable.

My daughter was six weeks old when she went on her first overnight. My wife and I weren't doing it because we were extreme campers who had a deep philosophical view of introducing children to nature at an early age (even though that's not a bad idea). It was because we simply couldn't deal with being stuck inside with a crying baby anymore and thought being outdoors with a crying baby might be better.

Kyla had her third birthday on a twelve day canoe trip. That was her first real camping trip. All the others before that were weekenders at a not-so-remote lake or a busy campground. Our daughter was ready to take on the longer interior trip before that, but we weren't; especially me. I'm the most paranoid father in the world.

My wife and I leaned a lot on that trip. Practical things like where to camp, distances traveled per day, what to pack, and more importantly what not to pack. We also made sure Kyla's time out there was enjoyable (so we could selfishly go out again without her rebelling). But before I list all that, there's one learning curve we had while camping with Kyla that was a surprise. The biggest pleasure we gained by taking our daughter camping was what she herself taught us. Kyla slowed our pace down dramatically by spending time looking at things like bugs and plants with the outmost curiosity. It's not that my wife and I didn't do that as well, but we didn't do it as often. Through our more adventurous trips in the past we got caught up in that game of traveling far so we can see more. Tripping with a child brought us back to reality. I've never been so immersed in wilderness, so aware of my surroundings then on our twelve day trip with Kyla, and I'd have to say that camping with our child did not signify the end of my time in the out-of-doors, it represented the beginning.

Know your child's limits. Our three-year old daughter had a good hour-and-a-half in the canoe before she got fidgety and bored; and that's good in comparison. The average time kids under five can spend in a canoe or hiking a trail is only thirty to forty minutes. Take note that my wife and I got Kyla to that point slowly by going on a half day outing, then a full day, then a weekend, and so on. If you don't move up the ladder of progress slowly, your child will definitely come crashing down.

When to take them

The biggest question asked about taking kids camping, especially in the interior, is how old should they be before taking them. My experience has taught me the earlier the better. A child is easier to handle at the campsite when they are not walking. Once they're walking the campsite becomes a constant danger zone. Many parents decide to wait until they are a pre-teen. That's a huge mistake. No pre-teen wants to spend time with their parents.

What to feed them

Breast feeding is a huge advantage. But if they're past that stage then powdered milk may have to do. And don't feel you can't dehydrate baby food. Use a commercial dehydrator or just spread it out on a cookie sheet and dry it in a conventional oven at the lowest temperature overnight. At camp boil the dried food in a half cup of water and it turns right back to the original baby food. As they get older then pack what they eat at home. Don't depend on them eating exactly what you're eating.

One of the biggest concerns parents usually have with traveling with the two-and-under crowd is what to do about the diaper dilemma. First, there's the cloth vs. disposable debate. Both have their problems. Cloth diapers can be washed and dried at camp, but this means doing a serious laundry every day. Don't rinse them in the lake. Bring a portable basin and make sure to dispose of the contents of diaper and rinse water in the out house or at least 30 meters away from camp. Many parents find it much easier to carry disposable diapers, carrying out the used ones in a double lined garbage bag. I have seen some campers try to burn disposables in the fire pit before leaving their site. The diapers definitely don't burn, however. They just look like big crusty globs of charred plastic goop making the campsite a complete eye sore for the next camper who comes along. 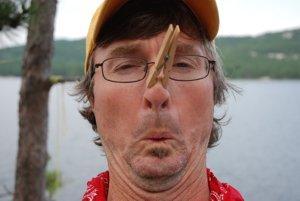 One parent I know recommends the stoop and scoop method. He packs disposables when camping with his one year old but lets the child go without diapers or pants for most days at the campsite. Another idea is to pack along cloth and disposable diapers, cleaning the cloth diapers on sunny days at camp and saving the disposables for the rainy days on the trail.

No one child is the same

All children have different limitations and all parents have various degrees of skill level, and stress level. So don't take the expert's advice on what your child can accomplish out there too seriously; this time you're the expert.

Be a parent and a leader

You're child needs direction out there. Explain everything to them, communicate with them, involve them in the trip, and never treat them like baggage tagging along on 'your' trip. Act more like a guide. Travel as fast as the slowest member, have an escape route planned, and depend heavily on repeat business.

Don't be cheap with gear

Yes, I know they'll grow out of that sleeping bag or rain suit in a year's time. And I know that even moderate gear is expensive. But don't go cheap or you'll be sorry, like when it turns cold and the zipper of their sleeping bag breaks or it pours down rain the entire trip and the rain suit you bought on sale begins to leak the first day. You should think about gear purchases for them as much as you do for yourself. If you don't have money then beg, borrow or buy used gear.

How to get them to wear a PFD

If you wear your PFD then they will wear their PFD. Period. Parents that force their children to wear a lifejacket all the time but don't wear theirs will definitely create an issue. And make sure the PFD fits and is comfortable to wear.

Where do they sit in a canoe?

We own a 17 foot canoe (I wish it was 18 feet). Our daughter is small enough to sit directly beside my wife in the bow and once in awhile will sit down in front of her. I've seen other parents place one or even two children sitting on the bottom of the canoe in front of the centre yoke. If you have two or more children eventually the parents will have to split up and stern two canoes. If you have an older child you might consider giving them a kayak to paddle.

Any portage over 400 meters is too long for a child under five. And having them walk it twice won't be easy. Our plan is to have my wife walk Kyla over the trail wile carrying a pack and Kyla with her own small pack (remember to make them involved). When she gets to the end a story is read while I return for the second trip.

How to deal with the bugs:

Be sure to use a mosquito repellent that doesn't harm sensitive skin (Johnson's Skintastic works well). A bug jacket might be a good idea, even a bug tarp. Or better yet, plan your holidays late in the summer when bugs aren't as much an issue. Those "after-bite" pens can also help relieve the nasty itch of insect bites.

Where do they sleep?

Pack a portable crib for babies and a car seat for inside the canoe. The older kids get to sleep in the same tent with mom and dad until they are old enough for their own tent. Choose a tent one size larger then normal and have a divider between your sleeping area and the kids. Nap time is either done in the canoe or on shore under a bug shelter. Just make sure they have their nap.

Know how to answer the word "Why?"

Our daughter went through the "Why?" stage during a full season of camping and I'll be honest, it drove me mental. Why are trees green? Why do mosquitoes bite? Why are you so afraid of bears? I answered each one quick and to the point. But let me tell you that there were many days I secretly wanted to just ignore her queries. But you can't. It would be far worse if they never questioned nature. Let them be inquisitive; after all that's why you have them camping in the first place. 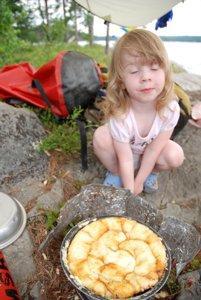 Be as Creative as a Camp Councilor...

Have games, songs and activities prepared in advance, and know how to make them fun. Kids don't care about how many bird calls you hear or how nice the weather is. They want to play on a beach, go swimming, be told silly stories before bed, burn marshmallows on a stick, feel comfortable and at home. Make a birthday cake for no apparent reason, hand out dollar-store gifts every morning, read them a book at the end of every portage, hand out wacky types of candy for each camp chore they do, bring musical instruments like spoons or an harmonica.

You're doing double duty on a camping trip. Not only do you want to entertain them, you also want them to be safe. And you have the sole responsibility to make sure they are safe. It's true that less accidents happen on a camping trip then at home but because you are somewhat isolated on a trip, injuries can be (or least seem to be) more severe.

Laugh and don't show your fear

Things will definitely go wrong while on a trip. Count on that. And your phobias (mine our bad weather and nuisance bears) are on high alert when you're with your family. But if you don't laugh at the misfortunes, the moderate ones at least, or reveal the fears you have of things out there, then they will do the same. Whether you want to admit it or not you are their role model, and they are little sponges soaking up everything you do and say out there. If you giggle at a tumble on the portage or sing a silly song during a downpour, they will too. 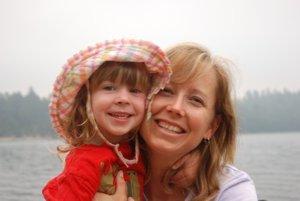 More tips from my wife:

How many times have you decided at the last minute to throw some gear in the car, load up the boat, and…

Without glasses, my entire mid to long-distance view is fuzzier than green bologna in the back of the…