Mention guns and canoe trips in the same breath and some folks are apt to go ballistic. Still, if you're traveling among dangerous bears it may be wise to go armed.

The following edited account is from my North Knife River (Manitoba) log, and relays the terror I felt when a polar bear chased my canoe across the river.

Coming around a bend, my partner Joanie points and says: "Hey, Cliff, look at that mountain goat up there." Seconds later the "goat" materializes into a full grown male polar bear who slides down the bank and swims straight towards our canoe. 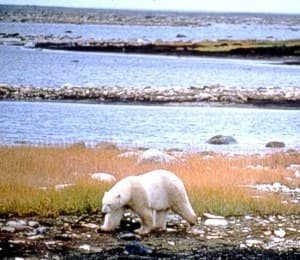 "Backferry"! I yell. It's like we're paddling through glue, and the bear is gaining ground. Soon as we slam ashore, I'm out, rifle in hand and the bear's still coming! I jack a shell into the chamber and pray God I won't have to shoot. I will if he comes much closer. When he's barely three canoe lengths away, I raise the rifle to my shoulder: Our eyes meet and he slowly turns and follows the powerful current around the bend. Will he come ashore and crash back through the bush towards us?

Seconds later, Dick and Finette arrive, sheet white. Suddenly, it turns into a comedy -- everyone massed in a tiny group, scared as hell, me clutching the half-cocked .444 Marlin while Dick drops shotgun slugs into the sand and Tom gropes in his pack for the plastic stinger shells. We're 75 miles from the Bay (Hudson Bay) and no one but me is ready to shoot. What a rush! Saw three more bears today; two swimming, one on land. Bear tracks everywhere. We've arranged tents like a fort. Perimeter teams have capsican (bear mace). I served everyone double shots of Pusser's rum tonight.

The Aftermath: Twenty miles from Hudson Bay we came upon Doug Webber's hunting cabin. The windows were heavily barred and huge spikes protruded from the door -- testimony to the destructive power of polar bears. We saw another cabin at Hudson Bay -- a decrepit goose hunting shack which had been invaded by curious bears. Everything -- cots, carpeting, you name it -- had been torn to shreds. We climbed on to the roof to get a better view of the ocean and promptly saw two more bears. After that, no one went out hiking without a gun."

Leave guns at home if you are not well practiced with them, or if your friends don't feel comfortable around them. A charging polar bear can cover 100 yards in about three seconds, which is faster than most people can fire an accurate shot. That's why bear experts unanimously recommend Pepper Spray over firearms. I carry both when I travel among the great white bears.

What Type of Gun?

Residents of Churchill, Manitoba, who have had lots of experience with polar bears, always carry a high-powered rifle or 12-gauge shotgun when they go out on the land. Canoeists who paddle Hudson Bay area rivers--especially, after mid-July when the bears are off the ice--are urged to do likewise! A 12-gauge pump-action shotgun with a short "slug barrel" is a good choice. The proven Brenneke Slugs have much greater penetration than 00 or 000 buckshot and are the preferred load for big bears at close range.

If you choose a shotgun you will want to carry some "fire-cracker" shells. They explode on impact with a loud bang and are often enough to scare troublesome bears away. Your state DNR should know where to get them. Caution: cracker shells can start a forest fire if they impact in a dry grassy area! Plastic "stinger" shells (available only to law enforcement agencies) are also useful. Your local police department may help you find them. Experiments in the Churchill area have shown that the hard plastic slugs deter bears (without injuring them) nearly 100 percent of the time.

The short-barreled lever action Marlin and Winchester "Guide Guns" which are chambered for the powerful .45-70 and .450 Marlin cartridges are another solution. These slim, handy rifles are easy to carry and they stow well in a canoe. My current "bear rifle" is a .450 Marlin Guide Gun, which I hand-load with 350 grain Swift A-frame bullets to a velocity of approximately 2000 fps. 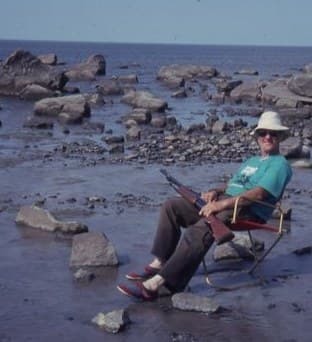 If you're driving to Canada (or through it on your way to Alaska), you must pre-register your gun with U.S. customs before you cross the border. Registration takes only a few minutes, and it's free. Be sure you keep the registration form - you must show it to U.S. customs on your return trip.

Declare your gun immediately to Canadian customs. If your gun is legal-meets minimum barrel length requirements, and IS NOT a handgun - you're good to go. You will need to fill out a short form and pay a fee (about 30 dollars at this writing).

Your gun must be sealed if you canoe through a wildlife preserve. The Canadian Wildlife Service or Alaska Department of Fish and Game, can provide details.

All handguns are illegal in Canada. Besides, even a hot .44 magnum may not have sufficient power to stop a charging grizzly or polar bear. Better to spray pepper and pray!

If you are flying on a commercial airplane, guns must have a trigger lock and be enclosed in a "hard" gun case. Ammunition must be stored separately from the gun. Ammo must be contained in the original cardboard boxes or in plastic boxes designed especially for ammunition. You cannot have ammo in clips or magazines. These rules don't apply to charter float planes.

Load the magazine but not the chamber and place the gun inside an unlined canvas (breathable) or silicone-treated fleece case. Insert the canvas or fleece case into a water-tight case (Kolpin makes a good one), and tie the case to a gunnel of your canoe.

Portaging with Your Gun

When it's time to portage, remove your gun from the waterproof case, but not from the fleece or canvas case. Set the cased gun across the top of your pack (between the shoulder straps and pack), and hit the trail. The waterproof case stays tied into the canoe. If you have observed bears in the area, sling the gun and carry it uncased.

Native people who live in the far north usually set their rifles in the canoe with no security or protection from the elements. Do that on a canoe trip and you'll have a pile of rusty parts before your trip ends!

Two things with regard to gun maintenance at sea:

A bit about bullets: God forbid you should ever have to shoot a bear. But if you do you better not have a misfire -- a possibility if your bullets are wet from pouring rain or a capsize. Military ammunition is sealed against the elements, but most factory ammo isn't. I paint a thin layer of lacquer (clear nail polish) around the cartridge case neck and primer of every loaded round. This guarantees ignition even in a torrential rain. 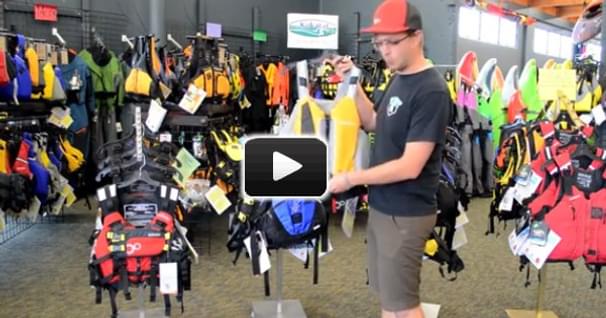 Welcome to Next Adventure, the favorite retailer in Portland, Oregon, and also online. We're here…