Stand Up Paddleboarding and Surfing in Montréal

In this episode of Paddle Tales, we're exploring the beautiful and fun city of Montréal. Located on the southern edge of Québec, only an hour's drive from the New York and Vermont border, you'll find Montréal, Canada's second-biggest city and one of the liveliest places you'll ever encounter. It's a place that embodies Québec's 'joie de vivre' or love of life, and it welcomes visitors like few other big cities do. Although the city itself is enough reason to visit, one of the things that makes Montréal unique is the incredible access it provides to world-class outdoor adventure activities, but what's even cooler is what you can do without even leaving the city limits, and that's exactly what Luke Hopkins is here to explore, and so he's hooking up with Hugo Lavictoire of KSF, a local surf, kayak, and paddleboard school.

- So Hugo is from KSF. He owns KSF, and he is taking people out on the Saint Lawrence and teaching them how to surf. What an awesome job that is, and also what a great way to spread what is here to go surf in the Montréal area. So KSF has access to all these great waves from Habitat 67, the Bunny Wave, and even coming out and surfing Big John. It's a great series of three waves to surf, 'cause you have the Bunny Wave, which is very easy to surf. It's a great way to learn the basics of surfing, and then you graduate from that and move on to Habitat 67. It's a little bit more challenging, but still an awesome wave. You can catch it from shore, and then after those two waves, and you've mastered that, you're pretty much ready to surf Big John.

What I mostly associate surfing with is actually sand and saltwater, but here in Montréal, surfing is totally different. There's no sand, there's no saltwater, but there is this beautiful, clean water of the Saint Lawrence rushing through the city and rolling through these huge river waves that you can catch and have the endless surf. Catching a river wave and catching an ocean wave, it's similar in the sense that the wave is behind you, and you're waitin' for it to get to you, but when it comes to river waves, you're actually going to the wave. So the wave is in one place, and you're coming in from above and dropping into it, and you're paddling as hard as you can. The last thing you wanna do is miss the wave and don't get that surf that you wanted to have. So you gotta paddle as hard as you can, and once you paddle and catch it, then you can surf on your belly, or if you catch it on a stand up paddleboard, you can catch it standing and smooth out on the shoulder, and once you're on that shoulder, you're in the safe zone where you can practice doin' some moves and carvin' around.

It's really fun. It was easy to catch, and once I was on it, it was glassy smooth like a big, long ocean rolling wave, but the best part is it never ended. I just kept surfing and surfing and surfing. It was awesome. The waves of the Saint Lawrence are perfect for teaching. The KSF crew is out there teaching others how to catch waves, catch it in the right spot. They even had surf instructors out there on the wave on each side, and they were guiding the customer to come down and drop in in the right spot.

It's an amazing thing to have surfing being taught in such a cool environment, so close to Montréal, and a wave that they can catch and actually have a surf that's longer than any surf you could really have in the ocean. Oh, man, that was awesome. It's kind of the never-ending surf. Once you catch it, you're just stuck in there surfing forever. That was fun.

The other aspect of surfing in Montréal is that you are surfing in the city. The city landscape is right there. I remember when I was out there surfin' on the wave, there was a big cruise ship that came into the port and pulled up, and you could see it over the Habitat 67 building. It's just an amazing thing to see all these things going on, and there's surfing in the midst of all of it.

We went to Schwartz's Deli, and they have smoked meat sandwiches that are amazing. Look at the size of that sandwich! And in the midst of all the beautiful restaurants, there's nice plazas to walk through, and there just beautiful places to see things, go shopping, go out and have coffee, go out and have a meal. Delicious, french fries, brown gravy, cheese curds. This is Montréal's finest moment.

Just watched the scenery, people watched, observed the beautiful environment around us, and we also spent some time in the old part of Montréal where there's old streets and old buildings, and it's a little piece of history.

- [Luke] How do you hold this thing? Strategy. It's like eating a burrito without sides and tops and... Mmm, that is good. Wow!

That was the best smoked meat sandwich I've ever had. Now let's go have some fun. Man, I'm excited.

- We're gonna have a blast.

- [Luke] It's gonna be good. I love paddling on rivers, so this what I live for. We started off the day hookin' up with Hugo and goin' out to the Bunny Wave, which is this great wave, easy to surf, super fun, actually. A real wide wave, so Hugo and I were just surfin' side by side, carvin' around. It's a great feel, and it's a great warmup to running Lachine Rapids, which has huge waves. So what do we expect to see down here?

- [Hugo] 13 meters from where we start to where we're gonna end.

- [Hugo] So, and it's gonna be for about five kilometers length. So you can see now the current going a bit faster and a few waves. There's two ways to surf on the way down, but they're one shot.

- [Luke] Yeah, should we stop and try to surf some?

- [Hugo] Exactly, because the last thing I want is maybe you--

- [Hugo] Where do you go? So I won't be able to guide you, but I'll let you by yourself going down the Lachine Rapids.

- [Hugo] Maybe on the second run, yeah. Louis is a good wave to try to catch on the way down.

- [Luke] Yeah, yeah. Cool. Paddling down Lachine Rapids, especially when you've never been down it before, this huge, wide-open landscape of rapids and rolling stacks of water, as you're paddling down, there's currents swirling everywhere and boils coming up, and it was great because I was behind Hugo. Hugo's an expert. I'm very experienced on rivers, but he's an expert on this river.

So today, I was doin' everything I could to get down the whole rapids standing, which is a super challenge. You got currents underneath of you that feel like a sea monster that's grabbin' your board and torquin' it around, and then you go through the flat, swirly sections, and it feels like something's pushing your board around, but I still actually managed to get down the whole rapids standing up, and then when we got down to the very bottom where Big John is, Big John's right there at the end of the rapids. It's the best place to surf because if you fall there, you can just paddle off into the eddy, and it's nice and flat water afterwards. What's awesome about surfing is when you catch it, it's instant exhilaration. You just come racing down the wave super fast. It was really fun watching Hugo surf as well. He was on a great board for just carvin' around and slashin' up the waves.

I think what I most like about surfing river waves, especially these on Lachine Rapids and on the Saint Lawrence, is that they're smooth, glassy waves that stay forever. They don't end with landing on a beach and disappearing with a surf that might only be five seconds or 10 seconds, which would be a long surf in the ocean, but here, a long surf is five to 10 minutes. It's the amount of time that most surfers have on waves throughout the whole year combined. You could get that ride time on ocean waves all year all in one surf out here on a river wave. A river wave just keeps on going and going, and as long as you can stay on it, you can keep on surfing. The Pyramid Wave and the Big John Wave and that whole stretch right there is the ultimate place to surf a kayak or surf a paddleboard, and it's really for experts only, so make sure you are an expert, and you're with an expert like Hugo.

Montréal is such a dynamic city. In the midst of the city, you've got this really awesome canal that has all these big boats that are passing through it, and just beyond the canal, is the full current of the Saint Lawrence River and home to Lachine Rapids and all these great surf waves. So if you come here to go surfing, you're gonna get the benefits of all these beautiful amenities and things to do, from eating out and walking around town and staying in nice hotels. It's a beautiful city. It's just dynamic in every kinda way. 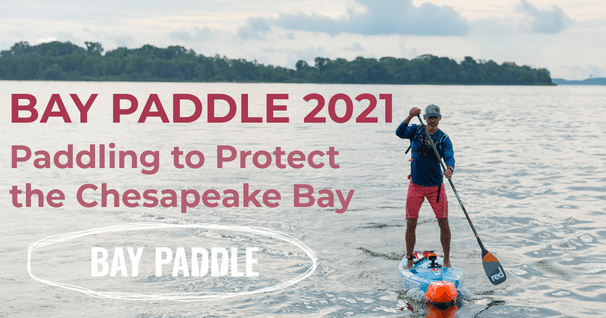 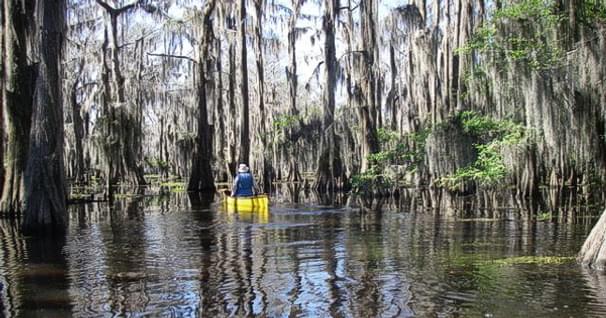 Every spring I do an annual canoe trip with friends. One year we chose “Big Thicket National Preserve”… 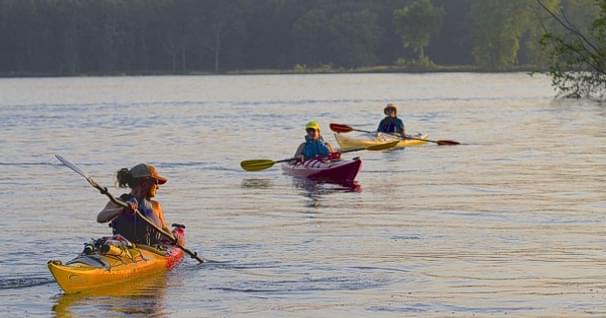 Tom Watson details that for all its grandeur, the best part of the iconic Mississippi waterway may…