Patience is like a secure eddy in the middle of a raging rapid.
It gives you time to formulate a plan before you dash dumbly downstream.

Long before the white man discovered the recreational value of rivers, native North Americans used them as highways. Families often traveled together, with their elders, children and dogs. By today's standards, their boats were fragile and their paddle skills marginal. Certainly, there were accidents. But native accounts don't dwell on them, any more than we do when we drive our cars. How is it then, that even poor paddlers usually got down-river safely? The answer is "patience" - a commitment to not take chances! Most modern paddlers don't have much patience. They offer these reasons why:

At the outset, I should make it clear that I am not a very patient man. When I taught school (34 years) I would often make my call seconds after the eggs were laid and sorted. Such a flippant approach would have killed me on a canoe trip.

Here are some examples of how patience pays:

The wind was blowing bloody murder when we arrived at Otter Lake (Fond du Lac River, Saskatchewan) so we put ashore to wait it out. The waves continued through supper, so I suggested that we camp and try again tomorrow. We were snuggled under a tarp, sharing hot buttered rum and popcorn, when we saw two canoes - wind in their face - plugging towards our camp. I waved them in and suggested they share our camp. They said they were behind schedule and had to keep going.

The wind quit around noon the next day and we paddled off with a smile, determined to make up lost time. The sun sets around 11 PM at this latitude (590), so we agreed to canoe till dark. Some time that day we passed "their camp". Everyone was asleep so we chose not to linger. We logged 31 miles that day and 29 the next, which put us ahead of schedule. We never saw the other canoe party again.

Moral? Nature rules! Stop when you must; run when you can.

The MacFarlane River (Saskatchewan) rushes through a three mile canyon just before it breaks out into Lake Athabasca. There's serious water here-you have to be nuts not to portage. But where? There was no sign of a portage on river left so we crossed to the right and took out at a narrow trail that ran up a steep bank. There was a tree with an ancient axe blaze on top. Aha. The portage!

Hardly. The trail ran a quarter mile along the canyon rim then petered out. Perhaps it continued in the woods? Four hours of searching revealed nothing. We were shot so I suggested we "sleep on it" and have another look tomorrow. We did, and drew another blank. Bickering began. Pressure grew to canoe the canyon, dangers be-damned.

I suggested we pair off and keep looking. Shortly, someone found an old animal trail that went in the right direction. But it was overgrown with young trees-a canoe could not be carried through.

Sure enough, it was a portage, albeit one that hadn't been used in years. It took us more than a day to clear the route and complete the carry. Our patience paid off.

We had just finished breakfast when I heard someone yell, "Bear! Big bear!" Sure enough, a huge cinnamon-colored black bear (or maybe it was a grizzly) was circling our camp. I hollered and blew a whistle. He didn't even look up. So I grabbed my rifle and amassed everyone into a tight group. He circled closer. When he was 50 feet away I fired a warning shot over his head. He just sniffed the air then ambled down the bank and came in from another direction. He paused behind a large rock and stood up to see us better. He was just 20 feet away! 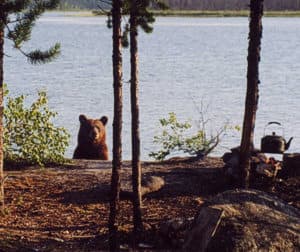 I was plenty scared, even with a powerful rifle in hand. But I did not want to kill this gray-whiskered old boy. So we talked. I looked unthreateningly into his eyes and told him I didn't want to hurt him, that we'd be gone soon, and he could have his way. I said I respected him and wanted him to go on living. But I emphasized that I would have to shoot him if he came over that rock.

We stared at one another for some time. I could sense the wheels turning in his head. There was no fear or animosity. Only the question of what to do next. Then, after what seemed like an eternity (I learned it was just two minutes) he turned and walked away with dignity. As soon as he was gone, some crew members said they would have shot him long before he got so close. But as the fear wore off, all agreed that my patient plan was the right one.

Patience is like a secure eddy in the middle of a raging rapid; it gives you time to formulate a plan before you dash dumbly downstream. 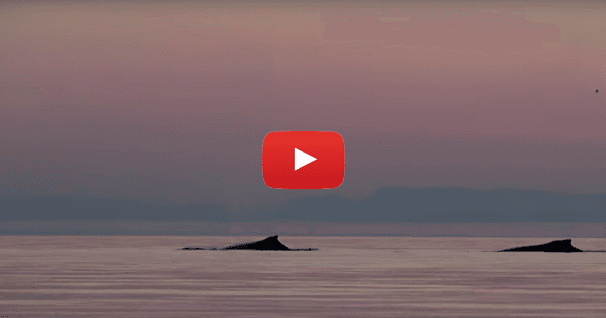 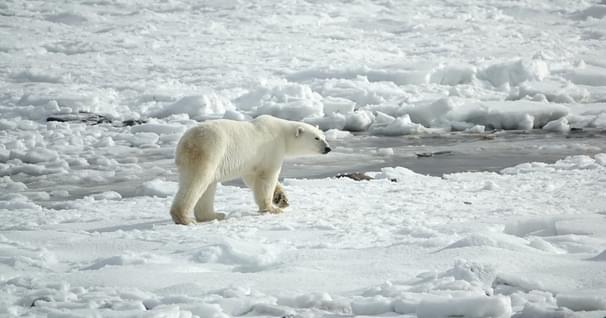