Recent annual high water and flood events in North America sometimes provide kayakers and canoeists with new paddling opportunities. What dangers may lurk in the murk?

We've all seen the news images in recent years depicting kayakers or canoeists plying the flooded streets and fields of the latest high-water event, either to rescue those still stranded or just for fun. 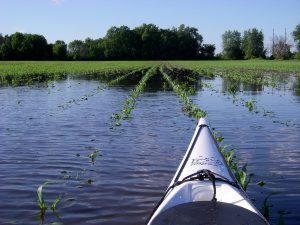 I myself have enjoyed gliding through flooded forests, paddling across open farm fields, and venturing further up small streams than ever possible under normal conditions.

But do high waters open new avenues of exploration for paddlers, or are they an "attractive nuisance?"

Such floodwaters, though potentially intriguing to curious paddlers, can be fraught with pathogens from flooded septic systems, chemical agricultural runoff, and drowned livestock and other animals. Many such health hazards are naturally occurring, but can be multiplied, distributed, and made more accessible during floods or other high water events.

These dangerous pathogens can be contracted in a variety of ways, from ingestion into lungs or mouth via air or water, or through contact with open wounds.

A pathogen is nearly anything which can produce disease, and describes an infectious agent such as a virus, bacterium, prion, a fungus, etc. which can cause illness ranging from mild symptoms like nausea and diareah to neaurological infections and even death.

Some of the most common pathogens which may be encountered while kayaking or canoeing, especially in flood waters, include:

These bacteria usually live in the intestines of humans and animals, and can in fact be an important part of a healthy human digestive system. But some E. coli are pathogenic, and can cause diarrhea when transmitted through contaminated water or food, or through contact with people or animals.

Norovirus is a highly contagious virus causing headache, diarrhea, nausea, stomach pain and vomiting, and possibly fever. Norovirus causes gastroenteritis, an acute inflammation of the stomach or intestines or both.

Giardia infection is the most common intestinal parasitic disease affecting humans in the United States. Humans become infected with Giardia by swallowing microscopic Giardia cysts found in contaminated food or water. In the US, Giardia infection rates have been known to go up in late summer. 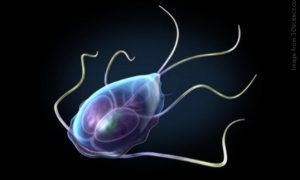 Giardiasis is a diarrheal disease caused by the microscopic parasite Giardia The parasite lives in the intestines and is passed in feces; once outside the body, Giardia can sometimes survive in open waters for weeks or months, and is found in every region of the U.S. and around the world.

Like other such infections, acute symptoms include diarrhea, stomach or abdominal cramps, dehydration, and perhaps itchy skin, hives, and swelling of the eye and joints.

Cholera is an acute, diarrheal illness caused by infection of the intestine by water or food sources contaminated by feces from a person infected with cholera. Though symptoms are usually mild, about 5-10% of victims will suffer profuse diarrhea, vomiting, and leg cramps. Rapid loss of body fluids can lead to dehydration and shock. Without treatment, death can occur within hours.

Though usually found in human habitations with inadequate water treatment, poor sanitation, and inadequate hygiene, cholera may also be found in the natural environment in brackish rivers and coastal waters.

Blue-green algae, also known as Cyanobacteria, are a group of photosynthetic bacteria commonly referred to simply as “pond scum.” Large populations of these bacteria can cause discolored water, taste and odor problems, and can threaten or kill marine wildlife by depleting dissolved oxygen during die-off. 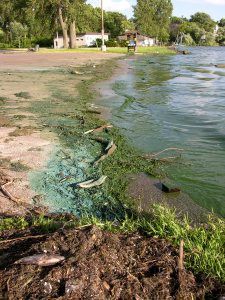 More concerning to humans though, is that when these microorganisms die, their bodies can produce a variety of toxins affecting the skin, digestive system, liver and other internal organs, or even the central nervous system. Serious infections can even cause serious illness or even death in humans and pets.

Common means of infection are contact with the skin, through inhalation, or by swallowing contaminated water.

Much of the cleanliness or quality of flood waters will depend on the surrounding environment; high or flood waters in wilderness or other undeveloped rural lands will tend to be cleaner, while agricultural and certainly urban areas more likely to be infected with dangerous contaminants.

Clearly, the best way to avoid such water-borne hazards is to steer clear of any unnaturally high waters or floods.

But if for whatever reason you should find yourself in questionable waters, here are some ways to stay safe:

The onset of symptoms of these ailments varies from a few hours to a few days. If you begin exhibiting any of these signs (nausea, vomiting, cramps, diarrhea, etc.), immediately seek medical help and let the physicians know that you may have been exposed to unsanitary waters. 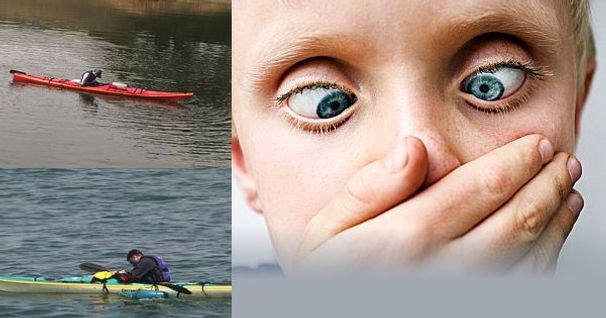 It's late on Sunday, and you've been out on the water for nearly four days, paddling through country…

I got a good fish on a crank bait bite first thing this morning and as I go to lift it, the fish jumps…