I'm big on symbolism. You know, experiencing something and pondering, "what does that *really* mean?" Such an event happened for me on New Year's Eve. No, not an epiphany after a night of recreation, because on that evening I think I was counting sheep by 10pm. I'm talking about what I experienced earlier that day. 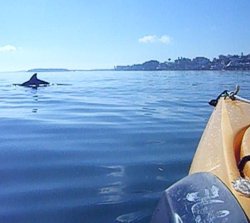 We had taken some friends of ours out kayaking and fishing, launched from our backyard. Normally this time of year it's cold (by Florida standards) and windy. However, on this day, it would be in the upper 70's and the water would be like glass. As a result, our friends had a legendary day on the water. As luck would have it, there was very little boat traffic and the dolphin were out in force. At one point I kept hearing something back behind my boat and finally realized that a dolphin was "playing" with something back there, completely unconcerned about my presence. So, I turned on the video camera and circled around. For a couple of minutes, I recorded that dolphin as it tossed a small fish up in the air, only to swim under it and toss it again. I was able to get within about 15 feet of it before it became spooked. Finally, as a boat approached, the dolphin made its exit from the area, and in its own way said farewell.

In that moment, I realized that you can't change history. But you sure can cherish the moment and also prepare for the future. What started as routine generic paddling / fishing trip morphed in to a turning point of sorts.

It's a new beginning for many of you, since you are just starting your paddle fishing journey. I take many facets of this sport for granted because I've been doing it for so long. So in this article I'm stepping back in to the time machine, to touch on a few of the basic things that make this sport a lot more fun for me.

When you fish from a boat, you have more room to move, more room to store things, and obviously you can cover more water thanks to fossil fuel propulsion. In the kayak, every tiny piece of the puzzle must be analyzed so as to get the maximum benefit. As we work the puzzle, I trust you can assemble the borders (the boat, the paddle, the PFD). But here, we will try to work on the pieces in the middle - the ones that don't make sense until you're able to find 3 that match.

ROD HOLDERS
Let's start with the ONE thing that separates the tricked out fishing kayak from a surfboard - rod holders. I can still remember cutting holes in my first kayak (bought it at a Sam's Club) and mounting rod holders behind the seat. Silly me, I thought I was "done". Many years later, I'd learn that I had only just begun.

The typical government-issue rod holders behind the seat are not really up for consideration. Manufacturers learned early on that this was an inexpensive modification that would turn the recreational kayak into a fishing kayak. The only necessary change that I've made over the years has been to alter the angle of these stock rod holders. Normally, they would be installed so that the rods would be held at an angle best suited for trolling - facing more to the side rather than straight behind. For my needs though, I found that as I worked close to shore and cover, I wanted my rods to be "enclosed" in the footprint of my boat. I could still troll if I wanted to, but at least this way I'd reduce the possibility of having my rods getting tangled up in the trees as I got real close to cover. This was accomplished by drillingout the rod holder rivets, turning the holders inward, drilling new holes and putting in new rivets. Easily a 15 minute job. 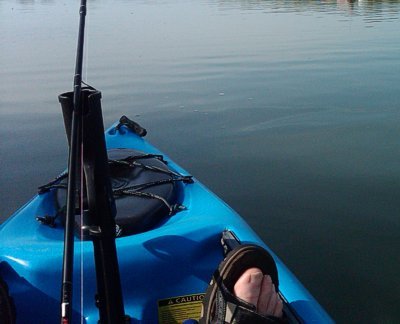 The front rod holders are a completely different story. You've seen it time and time again - the typical rod holder set up with 2 holders facing backwards as we've discussed, and then then a forward rod holder facing, uh, forward. Yup, looks great, but at the end of the day, is it really that functional? I mean, in order to get to that rod you have to reach past your ankles, and for me, that ain't too comfortable.

My wife actually led me to change my ways after she helped me get my boat ready one morning. She installed my forward rod holder for me, but had it turned around backwards. I didn't even notice it until I was ready to start fishing. What I quickly discovered was that thanks to this new configuration, I was able to have the rod arc over my head while paddling. It was completely out of the way, but easily accessible when I was ready to make a cast. All I had to do was lay my paddle across my lap (on a paddle leash of course) and reach forward for the rod.

There was another benefit too. By turning the rod holder around, it made a handy place to rest the rod as I changed lures, or put on another bait.

As for paddling, you can see that there's no problem there. But the rod is ready should I see a school of fish that need some investigation. 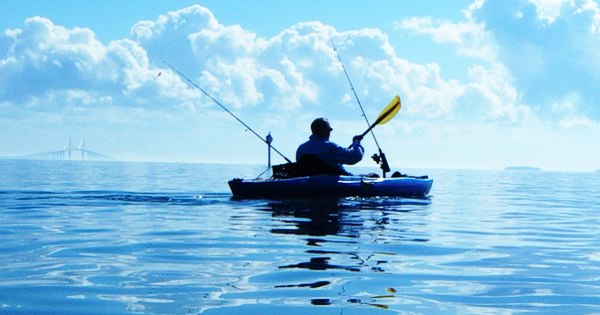 TACKLE STORAGE: EXTRA VS. HANDY
Once you have a rod holder (or 3), the next logical step is to devise ways to carry a complete tackle store with you. Wrong. I've gone from carrying 50 lures and 5 rods on a normal recreational day of fishing (more for a tournament), to taking a small tray of lures/tackle and 2 rods. And, in most cases, I only take 1 rod. This came as a result of a "chicken/egg" process that I went through. I can't remember if I started taking less tackle which made me decide on a few confidence baits, or if I started having good luck with a few baits and decided to I didn't need to take so much stuff. Either way, the result is the same. The less time you spend changing lures, the more time you actually have a lure in the water. That *must* happen before you can catch fish - they won't jump in the boat looking in your tackle box, regardless of what the commercials on WFN tell you.

Still, you need to have some degree of a backup plan. I throw a lot of soft baits these days. They're easy to change without having to re-tie, and they're pretty cheap. So, I'll get 5 or so and put them in my shirt pocket. 2 extras of whatever I think will be productive, and then my next 3 choices. I will have backups tucked away in the tray in my center hatch. But if all goes well, I won't have to go in that hatch much during the day. Again, this is a time saving measure, keeping me fishing rather than searching and rigging. 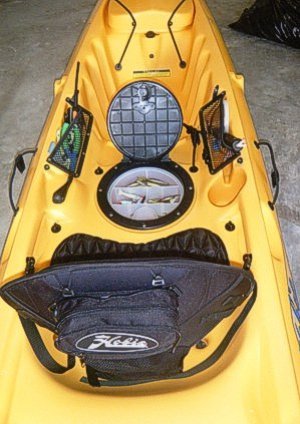 WELCOME TO MY OFFICE:

After a lot of trial, error, and recalculation, I've come up with a cockpit layout that works great for ME. I expect you to have your own criteria when it comes to what works for you, and I also expect your learning curve to be similar to mine - it's a process. But what you see here works for me. And, as I look at this picture (taken last summer), I've made even more changes. So, also understand that the process is probably never complete.

My center hatch holds necessities such as leader, snips, hook sharpening stone, and some extra lures and soft baits. As I mentioned earlier, I shouldn't have to go in here very often.

The side pouches hold other necessities such as pliers, fish grips, radio, and cell phone in a dry bag.

I have since added a camera mount on the left gunwale. That's also the side where my paddle is kept, and also the side where my rudder control is. I added that camera mount on the left side simply because I find that I'm most comfortable entering the boat from the right side. So, I keep the right side clear of clutter that might impede entry/exit. I also have found that when I opt to sit side saddle that I'm most comfortable sitting facing right.

SIDE SADDLE ANGLING:
My back hurts, pretty much all the time when I kayak. The Hobie pedal system has enabled me to stay out on the water longer because I don't paddle that much. But, even then, my back needs a break sometimes. I get that break by changing to side saddle, feet over the right side. My favorite boats have a center hatch which provides a decent place to sit, though I may need to splash a little water on that hot black hatch cover on those blistering summer days. 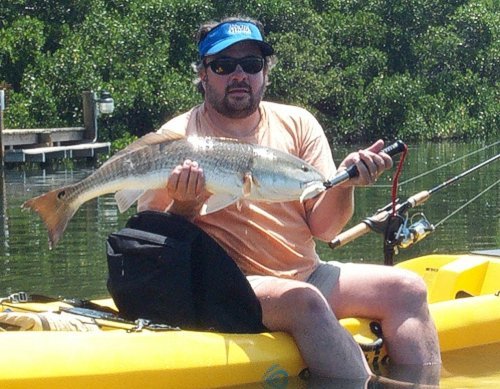 Aside from making a great angle to take a fish picture from, sitting side saddle also allows you to reach the rear tank well and the front hatch much easier.

THE MILK CRATE:
The plastic milk crate has become an integral component of our sport. It's what we use to get our gear to and from the boat, it's our auxiliary storage compartment, and it's also become a pretty neat place to mount more gadgetry. As simple as it is, it can also be a complicating factor if you try to stuff it too full of stuff. Keep in mind that even when you're side saddle items buried in that milk crate will be difficult to access. Keep it simple, keep it minimal. Make sure you come up with a way to secure the milk crate to the boat. Here I used "J" hooks to create a lashing point via my tank well bungee. If you mount rod holders in the crate, make sure that you angle them away from each other rather than having them hold the rods straight up. This will help prevent some nasty tangles in rod tips as you bounce through the waves. I learned this tip the hard way. 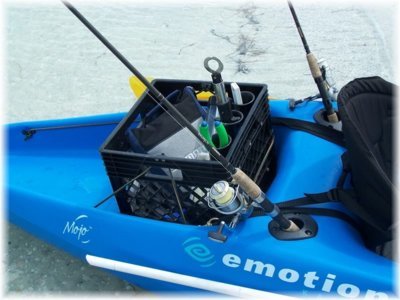 Spring will be here before you know it and you'll be back on the water a lot more than you are now. So take the time now while you have the time, and get your office in order. 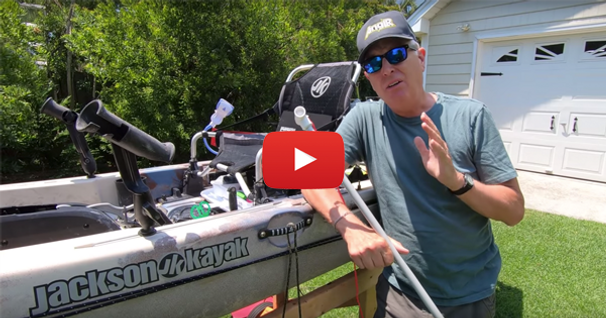 The main thing that separates an ordinary kayak from a fishing kayak is a rod holder, or two, or five.… 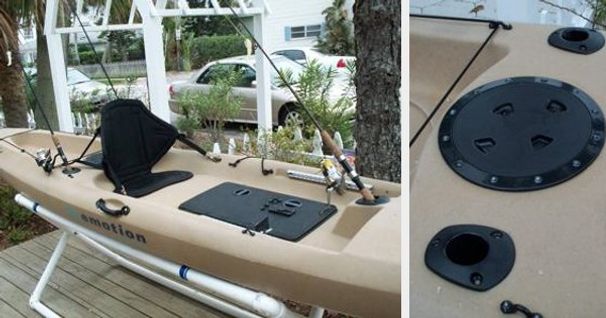 OK, you've decided where to put your rod holders, and what type of rod holders will go there. In this… 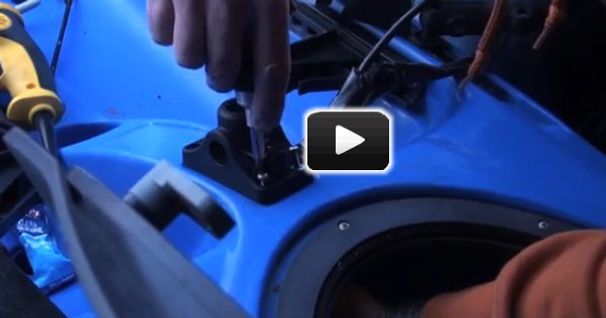